[Warning: This story contains spoilers from this week’s double episode of  ABC’s The Bachelorette.]

The Bachelorette contestants addressed the pressures of interracial dating on this week’s episode, and the conversations did not go how many viewers — or star Rachel Lindsay — might have expected.

More than one of the men competing for Lindsay’s heart unveiled his personal dating history with women of color, engaging in an open discussion of when and how they should tell Lindsay, the first black Bachelorette in the show’s history.

Will Gaskins, a 28-year-old black contestant, was particularly vocal on the subject during Tuesday’s episode, telling his fellow housemate that Lindsay does “not look like the people that I’ve been dating for the past couple years.” The Miami sales manager then went on to say that he typically dates white girls. “It’s not like I don’t date black girls. I have,” he said. “But growing up where I grew up, especially in high school, there weren’t a lot of black girls.”

During his one-on-one date — which ultimately saw his elimination — he disclosed that he has mostly dated outside of his race. Lindsay said she, too, was raised in a majority white community, but has predominantly dated black people. In fact, she told The Hollywood Reporter in May that she wanted her cast to reflect her dating history, and her cast rates as the ABC franchise’s most-diverse grouping in its 15-year run. When the season premiered, 11 black men stood a chance with Lindsay among a group of 31.

When the episode aired and a fan quoted Gaskins, Lindsay provided some insight into what was going through her head as she sat there and listened to Gaskins‘ confession.

Lindsay replied: “So you can imagine what was going on in my mind.”

So you can imagine what was going on in my mind

Back at the Bachelor mansion, Dean Unglert, a 26-year-old white contestant, questioned the importance of talking about their dating history at all with their hopeful fiancee. The startup recruiter from Venice, Calif. said he has “never really” dated a black woman before. He is also the same contestant who used the tone-deaf pickup line “I’m ready to go black and I’m never going to go back” when they first met, though Lindsay later told him she found it to be funny.

Eric Bigger, a 29-year-old black contestant, explained to Unglert why it was more important for Gaskins to tell Lindsay. He was also shocked by the admission. “I was like, ‘Woah! For real? Damn bro, it kind of blew me back,” he said. He then explained, “Because [Gaskins] is black, the perception — she might think, ‘you’re a black guy, you’ve dated black women.’ And that’s not true. So because she’s black and he’s black, I think it’s important.” 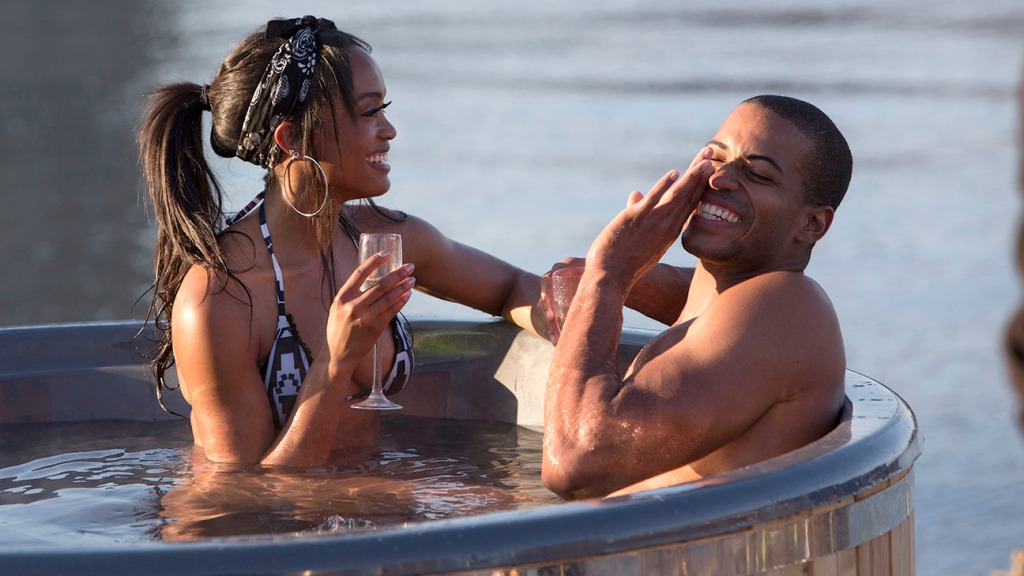 On the episode that aired Monday, Bigger initially questioned if Lindsay was attracted to “brothers,” noting that only one black man had been asked out on a one-on-one date. Bigger and Gaskins later added to that tally on Tuesday’s episode, but the night also saw Lindsay eliminate four black men in her six eliminations, leaving Bigger as the only black man of the six remaining.

The subject came up again on Lindsay’s one-on-one date Tuesday with frontrunner Bryan Abasolo, who is Colombian. “Do you think your family will accept me?” she asked. He replied by telling her that his family is very open.

How 'The Bachelorette' Picked the Men for Rachel's Historic Season

Critical discussions about race and diversity this season are especially significant within the context of the previous 33 combined seasons of The Bachelor and Bachelorette — ABC has never featured so many non-white contestants before Lindsay’s turn, sparking years of criticism for ABC’s lack of diversity. Kareem Abdul-Jabbar commented in January on another point of frustration: the few diverse contestants who do make the cut each year only make it on the show “as a courtesy for a few weeks before being ejected.”

The reality star, who has been open about pursuing interracial relationships, told THR in May that “race didn’t play in as a factor” when it came to choosing her fiance, as the star has announced that she is, in fact, engaged. “In my final decision, I just went with my heart and the person I found my forever with,” she said after production wrapped.

Lindsay has not disclosed the race of her winner, as it could spoil the reality show’s ending, but when her fiance is revealed it is guaranteed to be historic. ABC will either have its first interracial Bachelorette couple or its first black winner. She offered this tease about him: He is “confident, direct, self-aware, [has] a sense of humor, great smile, knows what he wants as far as the same things that I want — a marriage and a family. Also, he likes sports,” she previously shared with THR.

In March before filming began, Lindsay admitted to feeling pressure from the African-American community to gift her final rose to a black suitor. But her thoughts had slightly shifted after she finished filming. She told THR that pressure “was something I wanted to get over before I entered my own season.” To do so, she gave herself an internal pep talk: “I was just like, ‘You know what? This is for me.’ I’m not choosing a man for anyone else. I have to be selfish. I have to do what’s best for me. I’m the one who has to love and spend the rest of my life with this person, if I’m lucky to find that one. I couldn’t get caught up in picking a certain man to please a certain community.”

With just six men left, hometown dates are around the corner, when the Bachelorette or Bachelor flies home to meet the families of the final four candidates. Viewers will likely watch more discussions of race unfold onscreen, as she also stressed how important it was for her to bring up those conversations once she was going to walk into someone’s home or vice versa. “I just needed to know his thought process and realize that not everybody might be as accepting of our relationship as we are,” Lindsay had explained. “I needed to know if they were strong enough to handle that and how they thought about it or if they thought about it.”

This will not be Lindsay’s first time meeting a boyfriend’s family on TV. Four months ago, Bachelor Nation watched Lindsay address the challenges of interracial dating when she brought The Bachelor star Nick Viall home to Dallas, Texas to meet the Lindsay family. “Everyone may make this an issue, but for you it doesn’t matter, and for me it doesn’t matter,” she told her now ex-boyfriend. Viall had never seriously dated a black woman before her and Lindsay never brought home a white man before him.

Lindsay’s older sister, Constance, put Viall in the hot seat, asking why Lindsay was his first black girlfriend. “He’s like, ‘I don’t see color. I see Rachel,’ but at the same time with this climate we’re in, I feel like you’ve seen more racism come out and so he does need to be aware it’s not something that you can just hide and ignore,” she explained. Bachelor Nation may reunite with Constance when Lindsay brings her final two men home to meet her parents and siblings.

The revealing conversations about interracial dating happened during a multi-episode arc that played out several verbal fights between a black and a white contestant, stemming from the use of the word “aggressive” and its racially charged connotation. Both of the men, Kenny King and Lee Garrett — the latter was also the subject of racist unearthed texts — in the alleged “race card” dispute were eliminated Tuesday.

About keeping the controversial contestant on for six episodes, and watching him pick fights with several black contestants, Lindsay took to Twitter to say: “I may not see everything and I may do things on my own time…but I keep my grass cut low so the snakes will show.”

I may not see everything and I may do things on my own time…but I keep my grass cut low so the snakes will show! #byelee #thebachelorette

Earlier this season, Lindsay’s stress from the drama in the house, coupled with the pressure of being the first black Bachelorette, led to a tearful breakdown. “I get pressure from so many ways being in this position,” she said through tears. “I already know what people are going to say about me, and judge me for the decisions I’m making. I’m going to have to be the one who has to deal with that and nobody else, and that’s a lot.”

Previews for the next episodes appear to have abandoned the focus on racially charged drama, but that hasn’t stopped some critics from accusing the network of exploiting race for ratings.

The Bachelorette airs its next new episode July 10 on ABC.