Jordan Rodgers is moving to Saturdays at the SEC Network.

The Bachelorette winner and sportscaster, who has been providing college football commentary for SEC Now, is moving to a regular game-analyst position to call SEC Saturday Night, the franchise that features the network’s marquee college football game each Saturday.

“This past year has been a blast,” says Rodgers, who will continue to appear on SEC Now and other ESPN programming. “Overall, there is very little in my life I enjoy more than college football. Now as a game analyst, I look forward to traveling throughout the SEC, being around the best college football atmosphere each week and providing fans my own perspective of the game.”

Cole Cubelic and Tom Hart round out the new commenting team, replacing Jesse Palmer, Brent Musburger and Kaylee Hartung. Palmer, who also did a stint on the ABC franchise as The Bachelor in 2004, remains with ESPN and his role for this college football season will be announced at a later date.

“Jordan, Tom and Cole will be a great complement to each other,” adds SEC Network coordinating producer Steve Ackels. “Tom’s extensive knowledge of the overall production allows him to be our leader in the booth, dictating the action while setting up Jordan and Cole to inform, educate and entertain the viewers. With Jordan and Cole’s knowledge of the league as players combined with their preparation as analysts, SEC Saturday Night will be a great telecast once again this season.”

Rodgers began his gig at the network nearly one year ago, fresh off his win on the 2016 season of The Bachelorette. He and fiancée JoJo Fletcher remain one of a handful of success stories to come out of the veteran ABC reality series, which is currently airing its historic cycle with Rachel Lindsay, the first black Bachelorette in the franchise’s 15-year run.

The Hollywood Reporter spoke to Rodgers about his new gig, why he and Fletcher have yet to set a wedding date and why his TV résumé is unlikely to include a Chris Harrison-officiated wedding.

When did you find out you’d be moving to SEC Saturday Night?

It’s been in the early stages and talks for the last couple of months. Then it was getting this crew set together and figuring out who I was going to be working with and what game schedule we would have. I’m excited because I love the game atmosphere. I love game days and stadiums and getting to feel the pulse of the game. Getting out of the studio and back into the games is something I’ll be looking forward to on Saturdays. Being a former athlete and competitor, I like the aspect of prepping for the unknown. You have a game that you study for, and then you show up and don’t really know what’s going to happen. I enjoy that aspect because even though we’re not sweating, we’re in suits, it’s prepping for a game and a little bit of an adrenaline rush.

Almost a year ago, you won The Bachelorette, got engaged, landed this role and are now moving to Saturdays. How do you view this last year?

It didn’t come out of nowhere. The broadcasting aspect was something I was working very hard at since I had finished up playing in 2014. I did radio for a year and did some TV things and I was already in place at ESPN before The Bachelorette started. So that was a long time in the works, and then everything got amplified and accelerated. Everything that comes along with The Bachelorette as far as the media was a crazy experience. Crazy fans and trolls and the things that come with the reality side of TV. But the past year has been the best blessing I could imagine with finding my fiancée and starting a life together in Dallas. And getting to expand and grow in what I’m passionate about when it comes to my job.

Does it surprise you that there is a crossover audience with The Bachelorette and SEC?

There’s a ton of crossover! Way more than I ever thought. You’d be surprised how many fans I think are from The Bachelorette will come up and say something about football. That’s kind of one of the reasons my brother Luke and I started our podcast, Sports Related. We talk about football and current sports topics that are trending, but then we also have reality TV comedians, musicians and a lot of crazy guests. We talk about Twitter, movies, TV and what’s going on with pop culture as well. It’s crazy how much there is a crossover.

You moved from California to Dallas after The Bachelorette, which is where Fletcher is from. Do you feel settled and are you liking Dallas?

I love Dallas. We were leasing a place and we just moved to a different place in a great neighborhood close to JoJo’s family. We’re getting settled and moving everything in — there’s clothes everywhere and we’re getting our closets together right now. But we love our little neighborhood that we’re in. 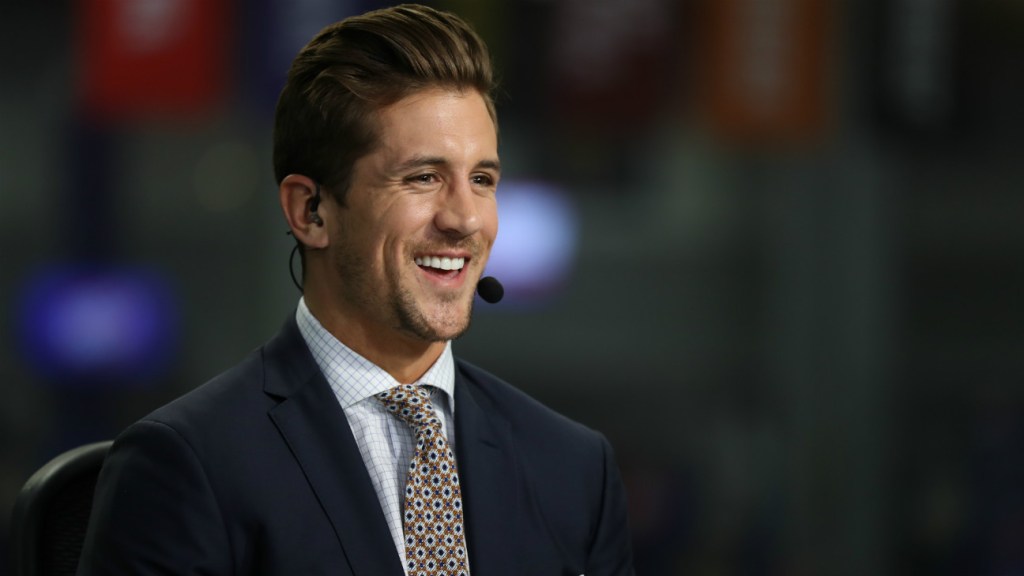 This new job requires you to travel for your Saturday games. Will Fletcher be joining you on the road?

At what point in this last year did the spotlight from The Bachelorette start to dim? Are you getting back to normal?

Yes, I think so. Even six months after, it was still crazy. We would have people showing up at our house all day and night. Depending the city you are in, the cameras will follow you whether you are grocery shopping or whatnot. You always feel like you have to be “on.” We’re very relaxed and we love enjoying our downtime together and being in sweats, and you feel like you’re always on guard, to some degree. It’s definitely slowed down and is much more normal now. We still love seeing our fans and fans that want pictures, but it feels back to somewhat normal.

JoJo Fletcher and Jordan Rodgers Talk Wedding and Rumors: "We Don't Want to Have to Defend Ourselves"

You are one of a handful of couples who are still engaged, but you haven’t yet set a wedding date. Why are you guys taking your time?

I think you realize what the experience was. You appreciate it so much for meeting each other and the commitment to each other is absolutely still there and that’s something we are going to do. We’re also figuring out our life. We’re learning more about each other every single day, what our life is going to look like and where it’s going to be. Both of our careers and what we’re passionate about. So we’re enjoying this time of being engaged, continuing to date and court each other, and getting to know each other even more. And then when the time is right, we’re absolutely going to sit down and start planning that. But we’re definitely taking our time. We want everything to be right and make sure we’re in the right place. We still don’t know if it’s going to be Dallas forever, but it’s a great place and there’s a lot of moving parts as we figure things out together.

Does ABC check in with you about if you’re leaning towards a TV wedding?

I haven’t heard from them, so I don’t think so. I have no idea how that process works.

Have you had those conversations about televising it for the fans?

It’s something everyone always asks us. That’s something we would have to discuss together but very honestly, my first reaction would be that I would probably rather not. There’s a distinct intimacy and privacy and it’s a very special moment with family and friends, and I wouldn’t want anything to tarnish that or to take away from that. It’s a time that I want to be able to honor my fiancée and soon-to-be wife and her family, and I want it to be ours. I want us to run the show and make sure it’s always what we imagined. If there’s a way to do that and include fans, great. But that wouldn’t be my first wish.

You two have taken a step back from the franchise. Is creating some distance a key to making it work?

I don’t think it really changed anything for us. We both do the same things we did before the show. She was flipping houses and doing real estate and that’s something she does every day now. She’s picking out tile and doing all these things with the contractors and plumbers. I have my company back in California, my ESPN work. We just got back to what life is. We’re happy to be doing it together and we had this short period of time where we met each other in this crazy and unbelievable way. We’re just doing what we would have been doing if we met at a restaurant or through friends.

What did you think of the Bachelor in Paradise controversy and have you spoken to anyone involved?

I have literally not watched anything since I finished, so I wasn’t following it that closely. I don’t know any of the details, but I’m glad that it seems to be back on schedule. I have some friends that are there, so I’m glad they are able to continue on that journey because everyone made a commitment and then it was kind of put on hold and wasn’t sure what was going to happen. I’m glad it’s back on track, but I haven’t really read enough to comment.

What is your ultimate goal with sportscasting — where do you see yourself in a few years?

I want to continue to be passionate about what I do. I love what I do now and I want to continue to grow my role. I think at some point, even getting closer and closer to the game-day experience, SEC Nation has an unbelievable show that they do every week from the games where they broadcast on campus. That’s something I’d love to see myself doing down the road at some point as well, and I think this is a step in the right direction. I’m looking forward to continuing to grow in this role and on this journey of what I’m doing with ESPN and this network. I’m excited.