When the bat signal went up for Rachel Skarsten, it came at a time when she needed it most and, as the cliché goes, when she expected it the least. Back home in Toronto, the 34-year-old was fresh off back-to-back long-running TV shows with Syfy’s Lost Girl and The CW’s Reign and contemplating her acting career.

“I was having a moment where I thought, ‘What am I doing, do I even want to be an actor anymore? Maybe life is taking me in another direction now,’” she recalls by phone during a recent late-night break from production on the Vancouver set of The CW’s Batwoman, where she has made a swift impact as the drama’s big bad.

Fearless indeed, as throughout her career Skarsten has faced a wave of professional challenges. To hear her tell it, the “best things in life aren’t planned” cliché rings true for her more than others. “Welcome to my career,” Skarsten says with a laugh that’s far less sinister than her onscreen alter ego. Skarsten’s career started at the ripe old age of 9 in Toronto, when she faced her first challenge. “No one wants to get into acting the way that I did.'”

Acting was never a lifelong goal or a planned career for Skarsten; it was the silver lining that stemmed from her father’s sudden death following a battle with pancreatic cancer. Three years later, an organization Skarsten’s father previously worked with invited her family to appear on their local TV program to honor him. During her time on the show — on which she performed a song — she was discovered by a talent agent who happened to be flipping through the channels. “Losing a parent is awful. But it was something really beautiful that came out of it,” she says of her acting start. “I was in it for the money when I was 12,” she adds with a laugh. Her lucky streak continued after she booked a commercial following her first-ever audition. (She is quick to note that, had she not gotten the job, she likely would have walked away from acting.)

Through her teenage years, Skarsten continued to audition and book gigs in the summertime and around her school schedule. One of her shoots in Nova Scotia would ultimately prove lucky, as Skarsten met her manager, who helped her book her first meaty role and official entry into the comic book world as Dinah Lance on the former The WB Network’s Birds of Prey.

“It was raining and I think I looked like a drowned rat,” she recalls of that audition. The next thing she knew, producers Warner Bros. TV flew her to L.A. (with her mother and brother) for a screen test in front of studio chief Peter Roth. “I don’t think I knew what the stakes really were,” she recalls of the interest in the role at the time. At 16, Skarsten faced another challenge: leaving the nest to move to L.A., where she was set up with a place to stay and a guardian.

“The show was quite challenging for me because I had never been confronted with the reality of this thing that I did being a business as well as an art form,” she recalls of her speedy entry to the TV business. Co-star Ashley Scott and other cast and crewmembers helped keep an eye on their young colleague. As a young star and fish-out-of-water from Canada, Skarsten missed high school life and playing hockey. “Up until that point, acting had just been one of the things I did — it was like an extracurricular activity for me — and when I moved to L.A., it became my whole life. And I wasn’t ready for that.”

The show would last only 13 episodes before it was canceled. And much like before Batwoman, Skarsten was mulling her career and decided to quit acting. “That was sort of the finale of the first act of the love affair that is acting for me,” she says. Skarsten returned home to Canada and went back to school, eventually earning degrees in classical studies and English lit from Queen’s University. “[For] a lot of children, you’re not capable of owning those decisions that you’re making and you’re sort of thrust into this very adult world that is very much a business,” she says. “I actually consider myself very lucky that I got the opportunity to step away from acting and then when I came back, I owned the choices.”

After college (and a bit of traveling), Skarsten found herself miserable while working as a manager at department store Abercrombie & Fitch in Toronto. Her mother, as a joke, suggested Skarsten return to L.A. to give acting another shot. Two weeks later, Skarsten — then 22 — packed up her car and drove back to L.A. Only this time, she had no apartment and no work.

Although it had been years since her first tour of L.A., Skarsten had a “distinct impression” that she would be welcomed back into the industry. “It was a very rude awakening when I got back that no one remembered me, no one cared about me at all and all of my contemporaries from when I had been there at 16 had continued working and now had résumés the length of my arm.”

The two years that followed were a reminder of how challenging making it in Hollywood can be: Skarsten didn’t book a single role. “I stopped counting at like 100 auditions,” she recalls. Ultimately, things got so bad that she found herself living in her car. That’s when, she says, she feels like she truly felt like an actor. “If I’m still here and I’m doing this and there’s no glory, there’s no creativity, there’s no money, there’s nothing, I must really actually want to be an actor.”

Not long afterward, her luck changed. Attending a music festival in Tennessee with her boyfriend, Skarsten got an audition for a guest spot for season two of Canadian Syfy import Lost Girl. She put together her audition tape in a tent at the festival and sent it off. Ultimately, she would book a sizable recurring role on the cult favorite. “I sometimes feel that the characters that find me, we’re meant to be together,” she says of her role as Valkyrie detective Tamsin. With her three-year recurring role, Skarsten wound up becoming a fan favorite within the LGBTQ community, who embraced her for her portrayal of her bisexual character. 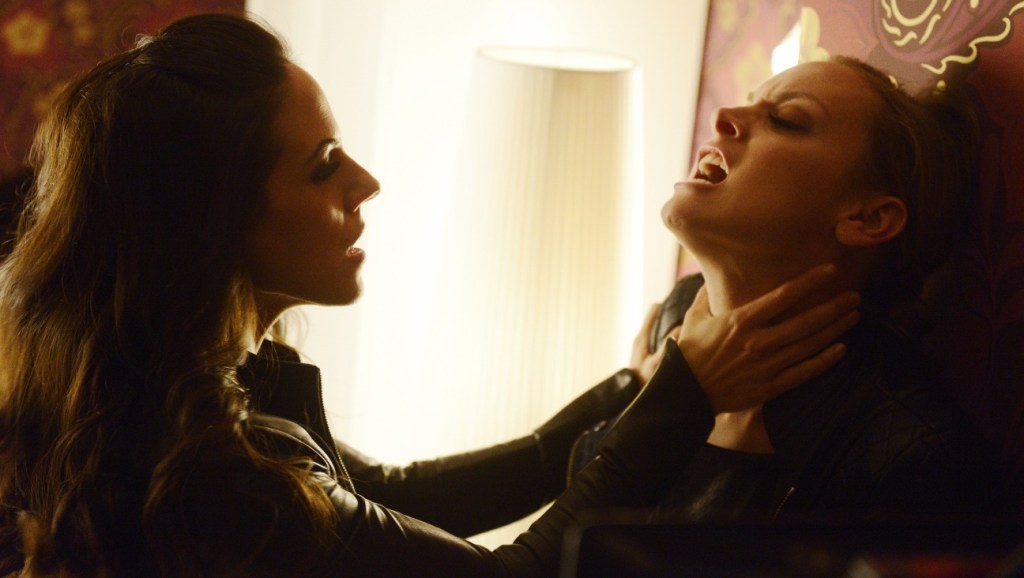 That dedicated fan base is now growing bigger given her role on Batwoman, which made history this season as the first DC Comics drama featuring a lesbian superhero who is played by an out actress (Rose). Although she says there were conversations about making her character Dinah Lance on Birds of Prey queer, “it felt like a bigger conversation at the time.”

The actress now looks back on Lost Girl as the beginning of TV’s transition into more normalized LGBTQ representation. “Now, I just feel like it’s much more normal and that makes me very excited because that’s what it should be,” says Skarsten. “We are, as actors, reflecting the world around us and the people around us and that needs to include all the people around us.” (Skarsten still fails to understand the backlash that followed Rose’s casting as Batwoman, which prompted the Orange Is the New Black grad to quit Twitter. “Ruby just is who she is, and she’s good enough exactly how she is,” she says.)

As for Batwoman, showrunner Dries says she and fellow exec producer Sarah Schechter “auditioned what felt like a million actors” for the role of Alice, the demented sister of Rose’s Kate Kane/Batwoman. The casting breakdown described Alice as being “what Joker was to Batman, but for Batwoman.” Ultimately, Skarsten caught Dries’ attention. “I found her to be very believable as a nutcase killer and very believable as a hurting sister looking for love,” Dries says. Dries and Skarsten then worked together to craft the right balance of sanity for Alice. “We did so many different deviations from really big to really small,” says Skarsten of the process of “finding” Alice. 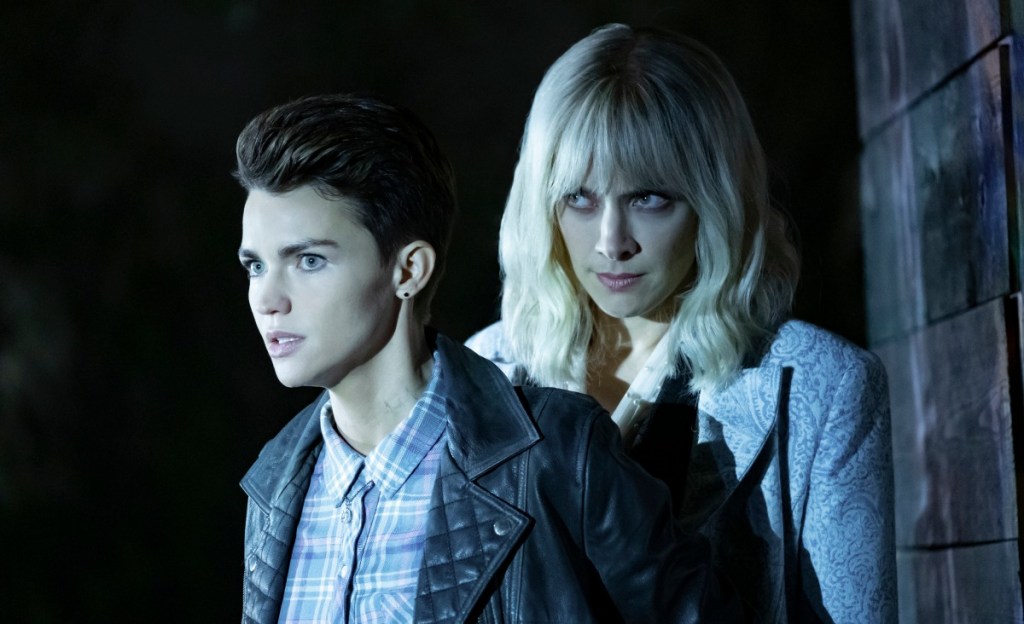 Now, Skarsten is earning strong reviews for her work on Batwoman and making the most of yet another golden opportunity. (The Hollywood Reporter‘s chief TV critic Dan Fienberg praised the actress in his Batwoman review, noting that “Skarsten makes Alice more than just the sort of deranged mental patient the Batman universe typically invites, more than just the Joker clone she first appears to be.”) “[It] was a very strange homecoming for me,” she recalls. “I never really had the opportunity to make a meal out of every scene that I do and also really be able to play every emotion, every level on the spectrum of a human being in one scene.”

As for what comes next for the freshman drama, viewers now have gotten a terrifying glimpse into the horror of Alice’s childhood, which — spoiler alert — included being abducted following a car crash that her father and sister long believed claimed her life. The recent Batwoman midseason finale also featured Alice’s most sinister turn yet as she poisoned Kate’s stepmother and stepsister, and forced the former to sacrifice herself in order to save her daughter. “I think with Alice, it’s having seen the horrific traumas she went through as a child and then hopefully flashes of goodness in her that makes the audience believe that something better still exists within her,” she says.

While Alice is easily the season’s big bad, Batwoman has no intention of making Skarsten a one-season character. “As Kate’s twin sister, Alice will be entwined in Kate’s life forever,” Dries says.

“I have a lot of fun playing the wackier, insane side of Alice. While eventually I do hope that she finds her peace, I hope it’s not for a little while, because I am having too much fun playing her as she is,” says Skarsten. And Dries agrees: “We don’t plan on seeing Alice in a white robe anytime soon.”

For once, it seems whatever is next for Skarsten and Alice, it will be planned.

How 'Batwoman' Is Using Don't Ask, Don't Tell to Explore a Different Kind of Coming Out Story

Batwoman returns Jan. 19 on The CW. Every episode — including the big Crisis on Infinite Earths crossover — is available to stream free on CWTV.com and The CW App.