[This story contains spoilers from the Jan. 19 episode of The CW’s Batwoman.]

It’s a historic day for Gotham — and for television. In a historic reveal, Ruby Rose’s Batwoman is officially an openly gay superhero.

For the past nine episodes of The CW’s Batwoman, Gotham was only aware that billionaire Kate Kane was an out-and-proud lesbian. But that all changed during Sunday’s episode when her superhero alter ego came out publicly — in an apparent nod to Ellen DeGeneres — with a fancy magazine cover to prove it.

The episode begins with an attack that is thwarted in the nick of time by the city’s masked heroine. As a hacker terrorizes Gotham by releasing important personal information and threatening to reveal a guarded secret, Batwoman faces her biggest fear: being perceived as straight as Gotham obsesses over her perceived romance with GCPD cop Slam Bradley, the man who saved her during an attack.

Torn between keeping her identity safe and being true to herself, Kate finds a voice of reason in the hacker, Parker (Malia Pyles), a high school girl going through a tough situation herself as her ex-girlfriend outed her to her unsupportive parents. Through Parker’s story, Batwoman realizes that in order to be a true hero she must embrace who she is — and do so publicly. 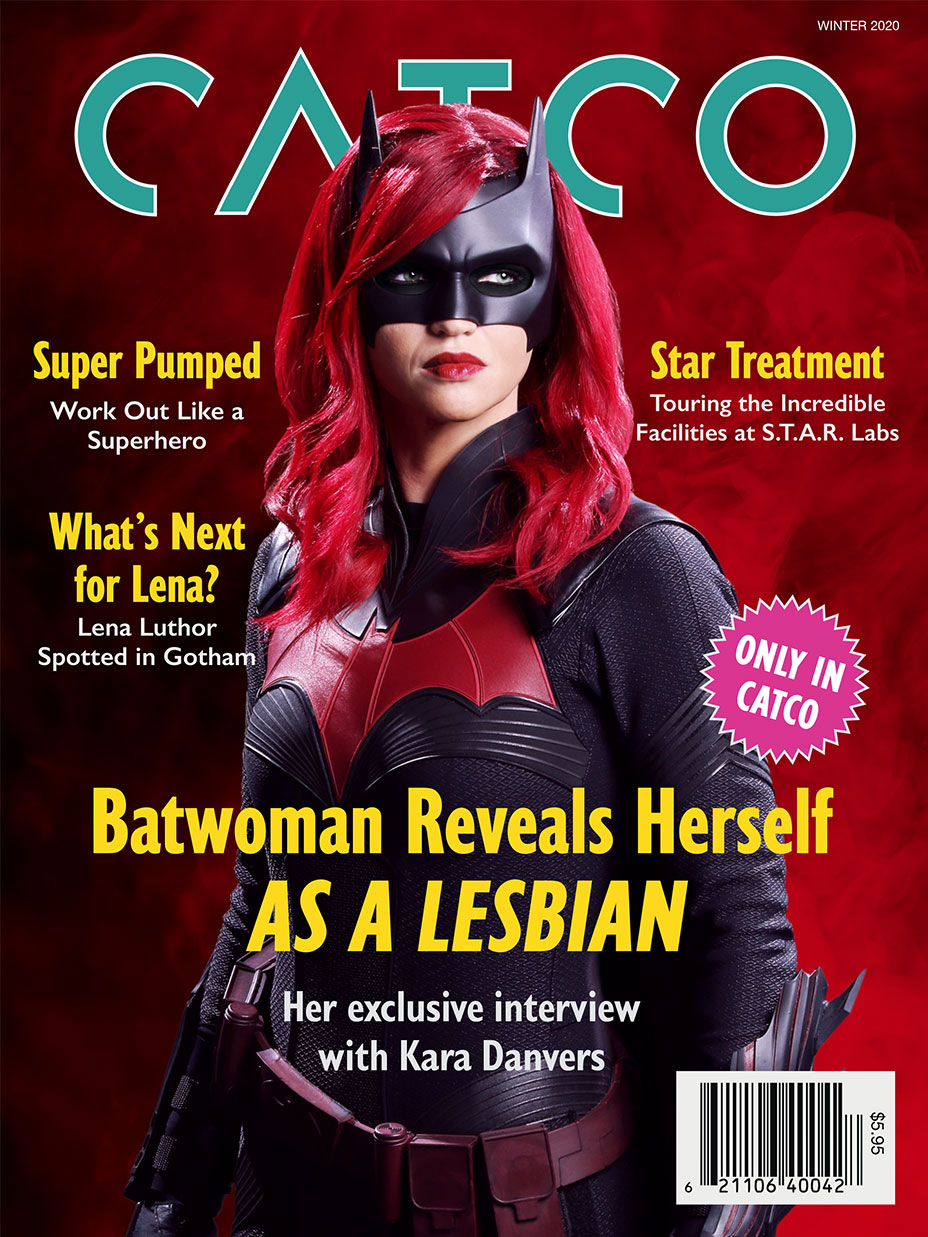 Batwoman, which made history as the first series with an openly gay superhero in its title (and played by an out lesbian), now adds to its place in the TV pantheon as the first superhero to come out publicly. “It’s kind of unreal,” says showrunner Caroline Dries, who penned Sunday’s ground-breaking episode. The openly gay Dries is also quick to express her gratitude that a show with a gay lead like Batwoman — recently renewed for a second season — even exists. “I am still a little bit in shock that I’m being allowed to write this show with so much freedom,” says Dries, who previously ran The Vampire Diaries.

Dries spoke with The Hollywood Reporter about how her wife’s coming-out story inspired Sunday’s episode, the impact Batwoman’s reveal will have on the show and star Rose’s emotional response to the episode.

How big of a deal is it to have a lesbian superhero character as the lead of their own TV show and to have her be openly gay?

It’s amazing. It’s crazy. I am just grateful to all the powers that be that did not stand in the way of that happening and just embraced it with me. It’s kind of unreal.

Did the network have any concerns about having Batwoman be openly gay?

Not at all. Basically what happens is at the beginning of the season, you go in and you pitch to the studio and network and say, “This is where we are going to go with the season.” Eventually Kate is going to realize that she is as comfortable and out of the closet as Kate and then she puts on the suit and hides a huge part of who she is, when she can actually be doing good if she were truthful about who Batwoman is underneath the suit. She’s going to come out and there are going to be consequences. The thing that any sort of storyteller wants is a situation where a character makes a decision and there are consequences, because that means more story and more drama. Just from a story point of view, it’s a great idea and then from just a unique point of view, it’s like great, let’s be the first show that does that.

How will Batwoman’s coming out impact her and the show?

Obviously, it reveals a huge piece of her “identity.” Like what Luke [Camrus Johnson] was saying at the beginning, it’s great to have this misinformation out, because it just confuses things. Now, it’s basically saying we just narrowed down the population quite a bit [regarding the masked hero’s identity]. That is one thing that will work its way into the story. The other thing is, and Vesper Fairchild [Rachel Maddow] says it in the voiceover, “What happened to politics staying out of our superheroes?” What will ultimately happen is that the GCPD, who is in charge of the Bat Light, becomes a little conflicted about what statement they are making now when they put the light. 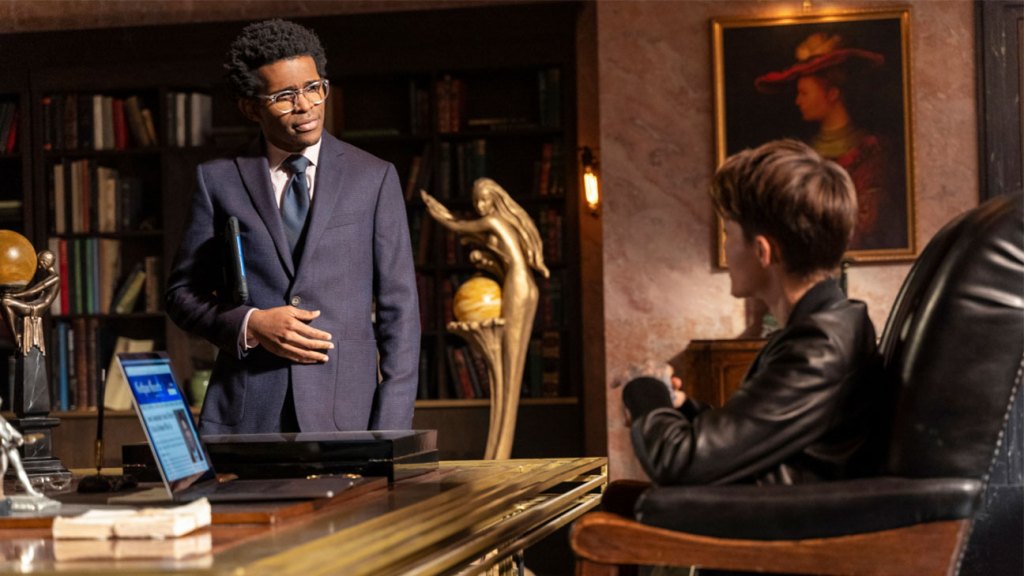 Could we see Batwoman take on any LGBT-focused social issues within Gotham?

Possibly, in the future. I think for now, what we will come to find out, she has bigger fish to fry just in a personal sense that will monopolize her time for the most part. But I think that definitely will be part of her story, while still dealing with all the interpersonal dynamics and drama with Alice.

This episode clearly means a lot to you, what were your feelings while writing it?

As I was writing it, I wanted to make sure we weren’t writing something with an after-school special kind of vibe. I wanted to have a villain that was cool, edgy, scary, but also really relatable and human and just needed a role model. That is how we came up with Parker. I was just thinking about my high school experience and how uncomfortable it was to navigate the dances. It’s a real sore spot, I think, for kids who are confused about their sexuality or sexual orientation. So, that felt like a good place to introduce Parker. It also felt like, what is the worst place that we could drop Kate into, what would be torture for Kate? Oh yeah, a high school dance! (Laughs.) I always tell Ruby — because she always wants the character to be happy — “Ruby, the first thing they teach you in drama is, you have to torture your character.” So, we are always trying to find ways of putting Batwoman through the wringer. We needed to also establish the sense of urgency of why she needed to come out. Well, the city is completely believing the wrong thing, that she and this hunk Slam Bradley could be a thing, meaning that she must be straight. That throws her for a loop, that all of these people are collectively wrong about something that’s so important to her. We wanted to make her as uncomfortable as possible to really make her make a decision.

How did Ruby feel about the episode?

She said she cried while she was reading it. I know it meant a lot to her. Interestingly, there was a line [in the script] where Parker says, “It doesn’t get better,” and Kate says, “You know, you’re right Parker, it doesn’t get better.” Ruby wrote to me and said, “You know, a lot of people look up to this character and watch this show and they don’t want to hear the lead character say, ‘You’re right, it doesn’t get better.'” So, we found a way to tweak it, so it could be like, it’s still hard out there, but you will get better if you start to love yourself more and embrace yourself. It was personal to both of us, so we wanted to make sure we got it right.

You’re an out showrunner with other LGBTQ writers on staff. How did your coming-out experience and those of your writers influence how Batwoman came out?

I have always said that Kate and now Batwoman is the person that, obviously, I wish I had growing up and she is still the person I aspire to be. She is way more comfortable than I am. With Parker, the girl who pushes Kate to have Batwoman come out, I used my wife’s coming-out story. A girl she was dating in high school got mad at her and called her mom and outed her. I felt like that was very relatable. It’s the idea of somebody who is not ready to come out yet, being weaponized against them.

What a lot of people don’t understand — and this episode portrayed this — is that coming out is not a onetime thing and you’re done. Why was it important to depict that aspect of LGBTQ life?

Yes! I just think that all of these things are so relatable to our community. Honestly, I wish I could just be on the cover of a magazine and be like, “OK, stop asking me about my husband.” The feedback I am hearing is that all these experiences I’ve had or people I know have had that we are putting into the show are very universal. 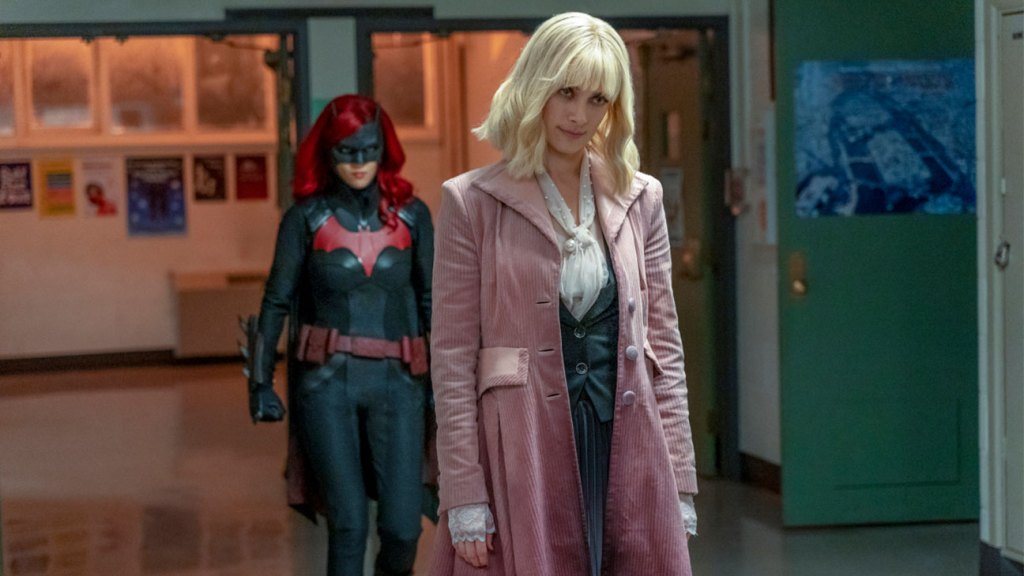 You call out the practice of making supporting characters, but never main characters, gay in the episode. What spurred on this assessment and what changes do you hope it inspires?

A huge part of my taking this job was the appeal of having a lesbian lead. I have developed a lot of shows before that ultimately didn’t make it on air and I’m always scared to say, “Oh, by the way, the lead is a lesbian.” I just wouldn’t even try to do that. It’s always like the friend and that is what shows up on TV. With this, because it was already innate to the character — thanks to the comic book writers — you can’t take that back. You have to let me make that happen. This is one of the only circumstances that you can “get away with it.” It’s part of my frustration of never being able to do it up until now and it’s hard to argue with. People are scared that every episode has to be about gay issues somehow — and doesn’t, really. It is one of her many issues, but she has a lot of other things going on right now. And if you are not gay or you’re not really interested in gay issues, that’s OK; you can still enjoy the show. It’s a fine balance of trying to be mainstream, while also trying to cradle these interests of a community that has been shafted for so long.

With a second season coming, what other aspects of LGBTQ life are you hoping to highlight?

Now that it has been highlighted, I really hope we can normalize it and make it through the fabric of the show without making it an “issues” episode. We did do a pretty good job of it with Kate just being a lesbian and going through regular relationship drama. So I am hoping that is what happens with Batwoman. As you’ll see, we have a little bit more romance to play. We’re going to spice up the dynamic a bit in Batwoman’s love life.

We are looking to bring in, I won’t say who, but a character we’ve seen before, who’s LGBTQ. We don’t have any villains in the roster right now that are [LGBTQ]. But, we’ve mentioned somebody from the comics in episode seven, a woman named Safiyah, and we are going to hear that name a few more times in the future. And, if you follow the comics, she has a very taut and dramatic relationship with Kate. So that is a character we wanted to explore.

How 'Batwoman' Is Using Don't Ask, Don't Tell to Explore a Different Kind of Coming Out Story

Interview edited for clarity and length.

Batwoman airs Sunday on The CW at 8 p.m.