The biggest hit of the 2019-20 TV season is an offshoot of one of the longest-running game shows in syndication: Jeopardy! The Greatest of All Time racked up 14.6 million viewers per episode over the four-night event.

It’s a phenomenal number for the current era, ahead of same-day viewership for every non-sports show on TV so far this season. It’s also not a shock to Rob Mills, ABC’s head of alternative series, specials and late night. “I have to say I’m thrilled, but not really surprised. The idea felt so big, and there’s something about Jeopardy! — you knew that audience would migrate,” says Mills of the show’s already sizable viewership (9.6 million in 2019’s fourth quarter). “Those people will come if you give them something that feels different than what they’re watching in access.”

The game-show event is part of ABC’s effort to have one big live (or live-feeling, in this case) event on its air each month, whether it’s the Oscars, the NBA Finals or the restaging of classic sitcoms in the Jimmy Kimmel-led Live in Front of a Studio Audience. “The strategy we’ve adopted [is to have] at least one monthly tentpole event. Some months we’ll have more. Some are legacy parts of our history; some are new, like Live in Front of a Studio Audience and The Little Mermaid,” said ABC Entertainment president Karey Burke at a TCA panel Jan. 8. “Eventizing franchises is part of that strategy. … It’s a combination of looking for new properties that feel that they can thrive specifically on broadcast and cater to tens of millions of viewers.”

Mills first met with Jeopardy! executive producer Harry Friedman about a primetime Jeopardy! several years ago. James Holzhauer’s winning streak in the spring of 2019 was the catalyst to develop The Greatest. “That’s when it was, OK, now we know what it is. Everybody’s going to want to see this guy play the other best of the best,” says Mills.

Mills credits Friedman with creating the best-of-seven format, in which the first player to win three nightly matches earns the title and $1 million.

Friedman also tells The Hollywood Reporter that the Jeopardy! staff did a rigorous vetting of all the games Holzhauer, Ken Jennings and Brad Rutter previously played. (On Jan. 14, Jennings emerged victorious on The Greatest and claimed $1 million in winnings as 13.5 million viewers tuned in, the smallest audience of the four episodes.)

“Once we wrote the games, then we had to go back and compare all this material with all the games that have been played previously by these three contestants, so we weren’t repeating clues that might have been asked previously,” says Friedman. “It was a scrubbing process of comparing these subjects and categories and responses to all of the games, the hundreds of games, that these three collectively have played before. That’s where our database certainly came in handy.”

Friedman, who is retiring as exec producer of Jeopardy! and Wheel of Fortune, says he’s “thrilled” with the big ratings for the tournament and excited to end his career on such a high note: “It’s wonderful to go out on top and especially to be associated with shows that have been so much a part of the American TV landscape for so long.” 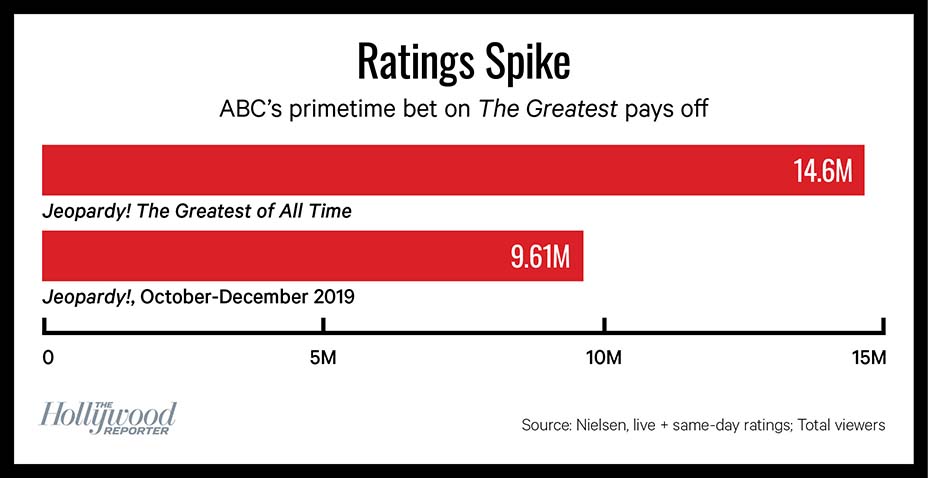