Few roles seem as colossal an undertaking as dissociative identity disorder patient Charlotte Wells in the One Flew Over the Cuckoo’s Nest prequel series, Ratched — but that’s the way Sophie Okonedo likes it. “Any job I do, I always want to feel like I’m slightly on edge,” says Okonedo. “If I’m invigorated, I think the audience will be invigorated.” Forget soft landings — Okonedo’s introduction to the world of Ryan Murphy was a scene in which she smashes a very sturdy-looking chair in her doctor’s office. “That was the most nerve-wracking day,” says Okonedo. “It was my first day, and the director said, ‘There’s lots of cameras here, so just do your thing and we’ll catch you.’ ”

The freedom of not having to hit a mark allowed Okonedo to focus on transitioning among her multiple characters, which for the actress was the true challenge. “The way that I approached Charlotte and all her many personalities was to make a full life for each of the characters, so that each one could stand alone by themselves,” says Okonedo. “The challenge was to switch from one to the other without any pause for breath. The faster you can do that, the more believable and energetic the character would be.” As much as she enjoyed the demands of her role, the experience of being in one of Murphy’s productions was an equal draw for the actress. “When I signed on, I didn’t have the script, so you just have to take a chance, really,” says Okonedo. “It was definitely intense, but essentially I’m doing what I love doing, so that makes it always slightly celebratory.”

For Charles Dance to get acquainted with Lord Mountbatten for his arc on The Crown, there was no shortage of material to dig into. “Lord Mountbatten co-wrote, produced and presented a 12-part documentary about himself,” says Dance with a chuckle. “There he is, saying: ‘I was very successful when I did this. I really pulled that off. This was a marvelous thing for me to do.’ And you think, ‘Good God,’ but he was very much of his time. He believed in the institution of the monarchy and what it stood for.”

To portray the man who was loved and loathed in equal measure, Dance knew he couldn’t rely on physical resemblance. Instead, the actor sought to capture the essence of Prince Philip’s uncle. “Toward the end of his life, I think he was probably not a very happy man,” says Dance, who in his first scene gets fired by then-Prime Minister Harold Wilson. “He’s at a loss as to what he’s going to do now. Things are slipping out of his control, and this is a man who has been used to having control. I have a lot of sympathy for him.” Coming in to portray a key member of this famously dysfunctional family for a total of just five episodes, Dance admits, could have been intimidating. “There have been occasions when I’ve gone into a film or a television [show] where relationships have been formed, and you feel a bit like an outsider. You try to find your space,” says Dance. “In the case of The Crown, that wasn’t much of a challenge. I was made to feel quite at home.”

Yvette Nicole Brown always believed there were two lanes for actors: “There was the award-nominated lane, and then there was the lane for the people that just happened to be working,” she says. “As a kid from Cleveland who had no connections, I’ve always been happy I’m working.” Now, thanks to A Black Lady Sketch Show, those tracks have merged for Brown. “I want to give Robin Thede her flowers,” she says of the HBO sketch series’ creator and star. “She’s created an opportunity for those of us that have been kicking around for years to show the different facets of our comedy stylings. She’s provided a safe space for us to do that.”

As Judge Anita Harper, Brown not only gets to show off comedic chops, but she gets to be part of a phenomenon Black actors in the film and television industry so seldom experience. “To walk on set for the first time in my career, where everywhere I looked was a Black woman, was just amazing,” says Brown. “And what I think people love is that it’s not exclusionary. The joy that we have in being together is not anti-anyone else.” For Brown, the thrill of the “Courtroom Kiki” sketches stretches far beyond the onscreen shenanigans. “I don’t know if other people are aware of this, but when a Black person sees another Black person on set, they nod. It’s a way of letting them know, ‘I see you,’ ” she says. “We still do the nods because we’re here together. And the thing about Robin is that, though she’s created a space for Black women, she’s also created a space for excellence. There are no favors. So, we nod.”

Long before Bernadette Peters was offered her role on the musical series, the Tony winner had made note of Zoey’s Extraordinary Playlist. “It’s such a beautiful story — to think that you’re hearing what’s really in people’s hearts,” says Peters. “I love when actors give from the bottom of their souls to let the audience see something in [the art] that can make their life better.” But despite her love for the show, the Broadway star’s first instinct was to turn down the opportunity to play Deb, an acquaintance with her own loss who prepares Maggie Clarke, played by Mary Steenburgen, for life without her husband. “I am a widow, and I had never really done any kind of role that related to that,” says Peters. “At first I thought, ‘I can’t do this role. I’m not going to do this.’ But she’s such a different type of person. She’s so gregarious and extroverted, which people think I am, but I am not.” 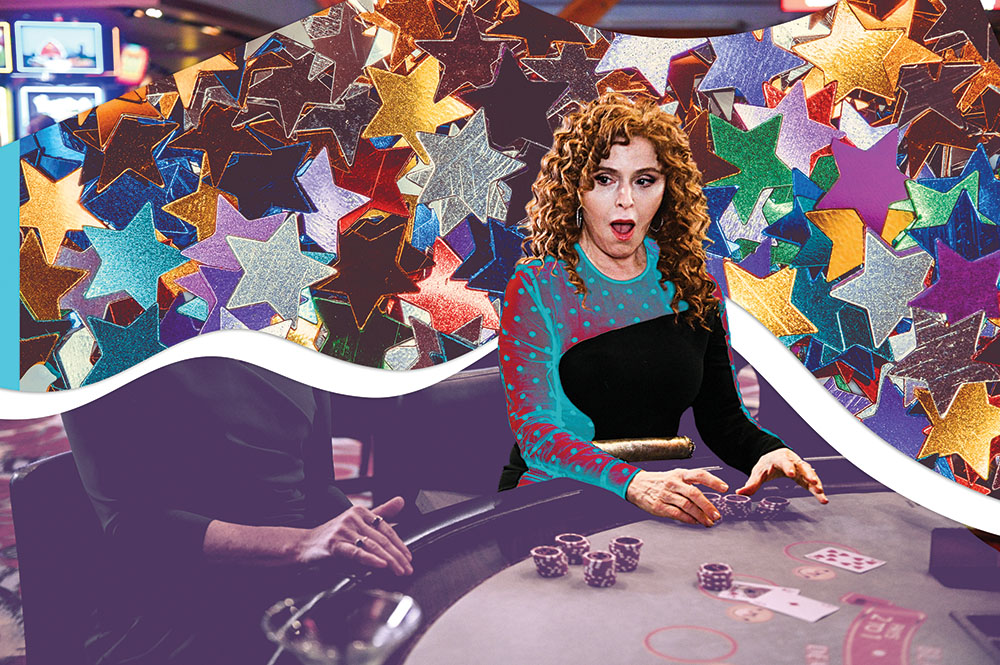 The role ended up being impactful in ways Peters didn’t expect. “She talks about moving on, alone. That’s very hard for people to do when they’ve had a tragedy or loss in their life. For me to play someone like that was freeing,” says Peters. “And it was fun to sing songs I wouldn’t normally sing!” But if Peters has a heart song of her own, it would be an ode to her new friendship with Steenburgen, which extended offscreen. “Really getting to know Mary was a gift,” says Peters. “She’s just this remarkable person, and I feel really fortunate that I know her now.”

According to Carl Weathers, when you are in the process of making something groundbreaking, you can feel it. “You get a sense of something that’s new in its own way, of stories being told in a way that you hadn’t seen before or experienced before,” he says. “For me, [The Mandalorian] definitely had that feeling of being historic.” Portraying Greef Karga, an agent of the Bounty Hunters’ Guild who becomes an unlikely ally to the Mandalorian (Pedro Pascal), 73-year-old Weathers goes from quieter tête-à-têtes to full-on running and gunning throughout his five-episode arc. “That’s the easy stuff,” says Weathers of the movie-scale action sequences. “The quieter stuff is where a lot of challenges can be. But I enjoyed it all.”

Weathers, who directed his season-two appearance, admits it is the moving parts of the Star Wars series that present the biggest challenge. “This [show] morphs, it changes, it grows. It operates almost as this living, breathing entity, so you really have a chance to express yourself as a performer,” he says. “There are blueprints, but man, you have so much flexibility with how the house is going to finally be realized.” Having already been part of a few legendary franchises, the Rocky, Toy Story and Predator star can now count himself as part of a new iconic family. “There’s something about playing a character in a family of characters that I would equate to a school of fish — how they all move almost simultaneously in one direction or another,” he says. “That was really wonderful about this, and it’s something that I really embrace.”