Walter White was the best crystal meth producer in the Breaking Bad universe, but he wasn’t the only one — and he doesn’t have a monopoly on being “the one who knocks,” either.

Enter: Tony Dalton as Lalo Salamanca, the cartel career man who made his Better Call Saul debut in the season four homestretch. Since his violent introduction to the series by way of bursting through a ceiling and murdering a bank employee, Lalo has gone on to cause all kinds of carnage in his quest against the Gus Fring (Giancarlo Esposito) establishment. His actions were so fiery as to land him in prison, requiring the legal services of one Jimmy McGill (Bob Odenkirk), better known to many as the newly named Saul Goodman — and Jimmy’s own slippery slope into Lalo’s world has resulted in his longtime romantic partner and newly married wife Kim Wexler (Rhea Seehorn) falling into that vortex, as well.

Written and directed by longtime Breaking Bad and Better Call Saul veteran Thomas Schnauz, season five’s penultimate episode, “Bad Choice Road,” finally brings Lalo, Jimmy and Kim in the same room as one another — indeed, the same room that Jimmy and Kim call home. In the middle of a tense fight as Kim keeps pressing Jimmy about his recent trip south of the border (which he’s still keeping close to the vest, as far as all the bloodiest details), a knock arrives at the door — and in walks Lalo, who was supposed to be long gone in Mexico at that point but has returned with a great deal of suspicion toward Jimmy. Rightful suspicion, at that.

The scene plays out dangerously, with Lalo forcing Jimmy to spin the same story again and again, wanting to find out how his car became riddled with bullets. All the while, Mike Ehrmantraut (Jonathan Banks) has Lalo in his sites, positioned on a rooftop across the way. No bullets are fired. Instead, the deadliest legal gun in New Mexico speaks out: Kim Wexler, freshly resigned from her major law firm position, gives the performance of her career to save both herself and Jimmy from certain death. It works, and Lalo leaves, but what did he leave behind in his menacing wake?

Ahead, The Hollywood Reporter speaks with Dalton about his time on Better Call Saul, his views on Lalo’s devil-may-care energy and what it was like to bring the boogeyman to life in Jimmy and Kim’s home. 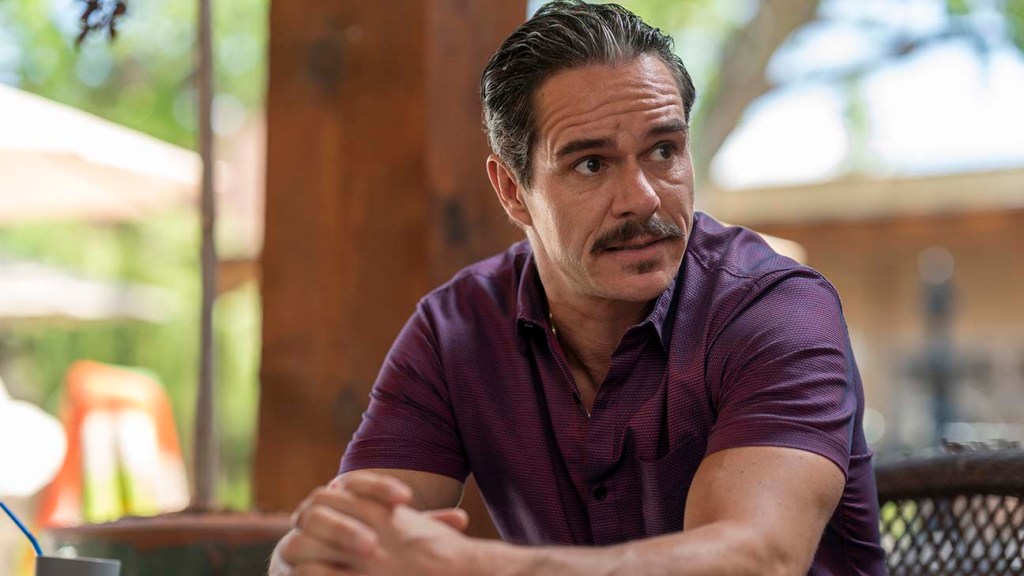 What has surprised you most about Lalo’s story arc through season five?

The writers in general are so good at this thing, that every episode, you don’t know where the story is going. Everything catches you off-guard. Right now, what it feels like for you, watching it? That’s what it felt like for us as they were sending us the scripts. That’s how we would find out [what’s next]. So I never knew where Lalo was going. In my first few scenes, where he’s cooking, he talks about how he’s good with numbers. So I thought, okay, maybe he’s an accountant! (Laughs.) But then all these other scenes start happening: He kills a guy at the Travel Wire, so, okay, he’s insane! So, I take everything they throw at me like something that’s completely new and fresh. It’s not a place I thought we were going.

That’s very in spirit with Lalo as a character, though. He’s a man who lives in the moment. This episode puts that idea in the spotlight, as we see him back away from his plan to meet up with the cousins, and instead track down Jimmy’s car because he senses holes in the story. There’s often something in the room, whatever room that is, that Lalo sees but no one else sees.

Yeah. And I think one of the wisdoms of Lalo — if you can call it “wisdom” — it’s that these guys in these cartels in Mexico, your fate is pretty much getting shot or thrown in jail. So you live in the moment. You take it as good as you possibly can, because most of these guys, they don’t make it. It’s a way of life. It’s something I wanted to get across personally with this character, because it’s something I had never seen before about anyone interpreting one of these types of character. They are always [played] so seriously, taking life so seriously, but I would think it’s the other way around. The worries … that’s something Lalo doesn’t do. He’s always maybe one little step ahead, because he’s thinking about something else. He’s not thinking about the gravity of the situation. If the worst case scenario is he gets shot? Oh, well! Then it’s over. Thanks, goodbye. I think that’s very powerful for a character.

It helps enrich the tone of the show, too. Often, you don’t know whether Better Call Saul is supposed to make you laugh or supposed to make you cry — many times, it’s both — and Lalo embodies that idea. For example, when he tells Jimmy about meeting Kim, and congratulates him on marrying up. For Lalo, it’s a big laugh, a bit lighthearted. For Jimmy and the viewers, this is horrible news, that Lalo knows Kim now.

Yeah, that’s right, because he doesn’t mean it in the sense of, “Hey! I’m going to kill her!” But he also knows how he’s received. He knows everyone’s a little bit terrified of him. He’s not a dumb guy. He sees how people react to what he says. He knows who he is and where he comes from. He’s not a guy selling ice cream in the corner. That gives him a little bit of edge. He knows he’s not always going to mean something [in a dangerous way], but he also knows a lot of people are going to take it that way.

You talk about how Lalo lives in the moment, how he views mortality as very fleeting in his line of work, which makes a nice contrast for his relationship with Hector Salamanca (Mark Margolis) — someone who has not yet died from “being in the game,” and is suffering an even worse fate, in some ways. You certainly get the sense that Lalo would rather be dead, based on his visits to Hector.

Yeah, exactly. I think Hector is a very important father figure to Lalo. The Salamancas in general, one of their traits is they are very family-oriented. I knew the only person my character could show any kind of empathy toward was Hector. He hasn’t seen anybody else that’s in his family. It was the only real opportunity to show that Lalo has this sweet side, or even a side that weighs on him. Yeah, there’s that view of mortality, but it’s that thing where they say the thing worse than death is wanting to be dead … that’s where Hector is in his wheelchair. He would be better off dead, in Lalo’s mind. But he’s family. He’s still around. He’s all he’s got. If we saw more of Tuco (Raymond Cruz), there might be more of that side where you see more of their humanity, instead of making everything a joke or a threat.

Speaking of threats, that leads us nicely to the climax of the hour, where Lalo comes knocking at Jimmy and Kim’s door…

That was a great day. We rehearsed a couple of days before, and then we walked right into that one. The thing about it was, it’s the monster in the house. That’s the scenario. After five seasons, Jimmy and Kim’s apartment is a safe ground, almost like a church. Seeing this guy just walk in … it’s like, what the hell? He’s not supposed to be there! The danger lives in the outside world, not in here. That’s where they brush their teeth! That’s where they have their own moments. The monster in the house thing was pretty interesting to film, to be honest with you. Even Bob and Rhea were like, “What the hell is Tony doing here?”

I’m sure it’s a sacred space for them as actors, too! We have seen a lot of personal danger in the relationship between Jimmy and Kim, but Lalo walking through the door presents a very different, very immediate kind of danger — and you’re embodying that threat.

Yeah, one hundred percent. I don’t remember who said it — maybe it was [executive producer Peter Gould] or maybe it was [director Thomas Schnauz], I don’t remember exactly who it was — but someone said, “You know how Game of Thrones has dragons? We have Lalo walking into Kim’s apartment.” That’s our “what the hell is that?” kind of moment.

Season five ends soon. Without getting into what’s coming next, what can you say about how the greater Better Call Saul journey has pushed you as an actor?

I’m just grateful I’ve gotten to come play with the big boys out in Albuquerque. You try to make a character as true to itself and to what you believe in, you try to defend him, you try not to judge him. Lalo came out that way through what the guys had written. I brought a little to the table as well. I had been doing a character that was so dark and somber and serious for so many years on [HBO Latinoamérica’s Sr. Ávila] that I needed to really change it up. If I’m still going to be a bad guy with a gun, I might as well do it with a smile.

This interview was edited and condensed for clarity.