Continue to The Hollywood Reporter SKIP AD
You will be redirected back to your article in seconds
Skip to main content
July 23, 2019 9:15am
Logo text

Beverly Hills, 90210 became a true TV phenomenon when its second season began in the summer of 1991. It’s fitting, then, that BH90210, a meta-revival of the original series, is getting a summer debut.

The show, which features the core cast playing heightened versions of themselves, premieres Wednesday, Aug. 7, on Fox. It will feature Jason Priestley, Shannen Doherty, Jennie Garth, Ian Ziering, Gabrielle Carteris, Brian Austin Green and Tori Spelling reuniting and trying to launch a reboot of the teen soap that made them household names in the 1990s.

The Hollywood Reporter has all the details about the revival ahead of its premiere.

The project had been in the works for almost a year before the official word came down in late February. Garth and Spelling sold the idea to CBS Television Studios, which produced the original series. Writers and showrunners Chris Alberghini and Mike Chessler, who worked on The CW’s 90210 reboot (and Spelling’s So Notorious, which had a similar premise), who conceived the show with Spelling and Garth.

Fox, the show’s original home, landed the revival because CEO Charlie Collier was said to have the most passion about putting it on the air. “We take the legacy of Fox very seriously, from Melrose [Place] to 90210 to 24,” he said a few weeks before BH90210 was announced. “All of these franchises, if we could do it right and with the support of great writing, we’d take a serious look at a lot of it.” 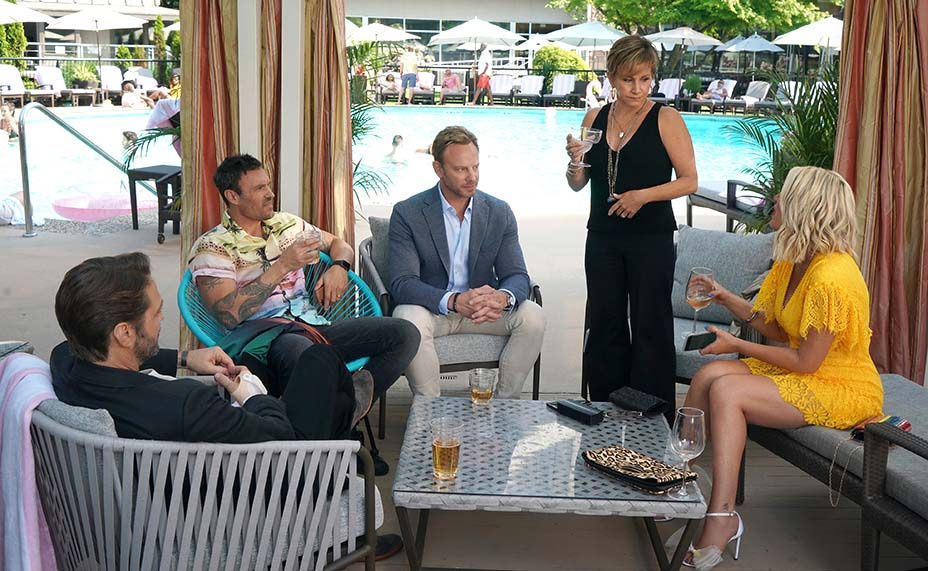 Priestley, Garth, Spelling, Ziering, Carteris and Green have all been on board since the beginning. Doherty, who famously left the original after four seasons amid clashes with some of her co-stars, joined up in April.

BH90210 was announced just a week before Luke Perry’s death March 4. He was not attached to the show at that time due to his commitment to Riverdale on The CW. Several members of the cast have said the series will pay tribute to their friend and co-star (Doherty will also-guest on Riverdale‘s fourth-season premiere, titled “In Memoriam,” that will honor Perry and his character, Fred Andrews).

Carol Potter, Priestley and Doherty’s onscreen mom, will recur on the show, as will Christine Elise, who played Brandon’s (Priestley) troubled girlfriend Emily Valentine in a dozen episodes of the original.

Denise Richards, who had a one-off role in season two of the original series as a cousin of Kelly’s (Garth), will also guest-star.

The original show’s theme song also carries over to the new series in a credit sequence that mimics the earlier series — though the synced hand-clap and fake punch Priestley did under Perry’s chin in the early ’90s isn’t transferred to a different cast member.

La La Anthony will play Shay, a music superstar who’s married to Green (in real life, Green has been married to Megan Fox for nine years). She’s the family breadwinner while Green is a stay-at-home dad.

Vanessa Lachey will recur as Camille, a high-powered publicist who’s married to Priestley and balancing her career with hopes of starting a family.

Ivan Sergei plays Nate, an ex-hockey player and would-be sportscaster who’s married to Spelling. The two (in)famously co-starred in the 1996 TV movie Mother, May I Sleep With Danger?

Fox’s description of the Aug. 7 premiere reads, “Having gone their separate ways since the series Beverly Hills, 90210 ended 19 years ago, the cast reunites at a 30th anniversary fan convention in Las Vegas, causing old flames, feuds and feelings to reignite. At the end of the weekend, Tori suggests that they get a 90210 reboot off the ground.”

The cast has said they will poke fun at themselves and some of the off-camera drama they were part of during the show’s initial run, which lasted from 1990 to 2000. And, in a case of life imitating art, the show had some behind-the-scenes upheaval in May, when showrunner Patrick Sean Smith and several writers left the production. Paul Sciarrotta was upped to showrunner and will executive produce with Alberghini, Chessler and the seven stars.

Watch a teaser for the show below.