Viewers of the HBO drama took to Twitter after the series premiere reacting to Scott’s beard with GIFs galore and a slew of memes. And fans of the beard can thank one person for it all: Adam Scott.

As it turns out, it was Scott who suggested the beard to the drama’s director, Jean-Marc Vallee. “I just thought he would have a beard and a fleece vest and four different pairs of khakis. Jean-Marc kind of thought that was an odd way to go. I told him all of that and he was like, ‘Oh, all right yeah. Let’s do the beard!'” Scott tells The Hollywood Reporter.

Scott’s character, Ed Mckenzie, is a stay-at-home dad and husband to Witherspoon’s Madeline McKenzie. And though he may seem like the dream husband — especially compared to Skarsgard’s Perry — Scott won’t rule out Ed having secrets of his own. “There is always a surprise somewhere,” he says.

The actor, who next stars in Netflix’s upcoming movie The Most Hated Woman in America, talked with THR about his character’s breaking point, his onscreen marriage to Witherspoon and whether the characters from Parks and Recreation could ever survive in Big Little Lies‘ Monterey.

What themes do you think Big Little Lies is trying to explore?

People are never what you think they are. And people’s perception of you is never quite what you think it is, either. The show plays with time in a really interesting way, and people’s pasts are haunting them in really interesting ways. There are people on the show that cannot let go of the past and will not shake the past and the vendettas they have. That’s what Ed is trying to help Madeline with. You need to just accept where you are and look around at what you have because it could all be gone. There’s a real, fragile, invisible dome around all these people. They are living in this privileged vacuum and we’re watching it get disrupted maybe for the first time in a real significant way. Watching that slowly erode and start to shatter is fascinating.

Were you familiar with Liane Moriarty’s book before taking the role?

I had heard of it, but I’ve never read it. But then I read all seven scripts just over a weekend and it felt like a novel in the sense that all of the storylines had a real kind of breathable life to them, and the dialogue didn’t sound like dialogue, it sounded like conversation. In a book the dialogue can be spare because you’re padding it with all of the writing around it, so you get a clear picture of what’s going on. And so sometimes screenwriting can feel a little exposition heavy, but there really wasn’t any of that. It really felt like lived-in, real conversation. David E. Kelley’s dialogue makes the actor’s job really easy. What was really there for you was that with Jean-Marc’s style where there’s a real intimacy on set because there is no video village, there’s no lights, just a couple of actors and a camera. So that, with David’s poetic dialogue, it was a really great fit. With Ed standing up for himself, just on the page it felt very real. Even though it’s only the second episode, I feel like David Kelley really builds really nicely to it.

Did you have any favorite lines from Ed in the episode?

When Madeline asks him where is this coming from and he says “It’s coming from the fact that you don’t really adore me,” is really a painful thing to say. (Laughs.) It was a really unusual thing to say. There are a lot of pieces of dialogue like that show where it sounds odd to the ear and you think about when people talk and they don’t know what they’re going to say yet. They’re not beautifully constructed sentences, they are just fragments of feeling kind of being pushed out of your mouth. That’s one of those lines I thought was full of so much meaning before I even got to set.

How would you describe Ed and Madeline’s relationship?

Ed is madly in love with Madeline and has kind of married above his station a bit, socially. If it’s plausible that Madeline settled a little bit in her second marriage, it’s plausible that Ed lucked out. It’s a very sensible marriage for Madeline because Ed is someone who can gently guide her hand off the third rail and bring her back down to Earth, and he knows when to and how to calm her down and get her focused on the right things. I don’t think that there’s really anyone else who can do that for her. 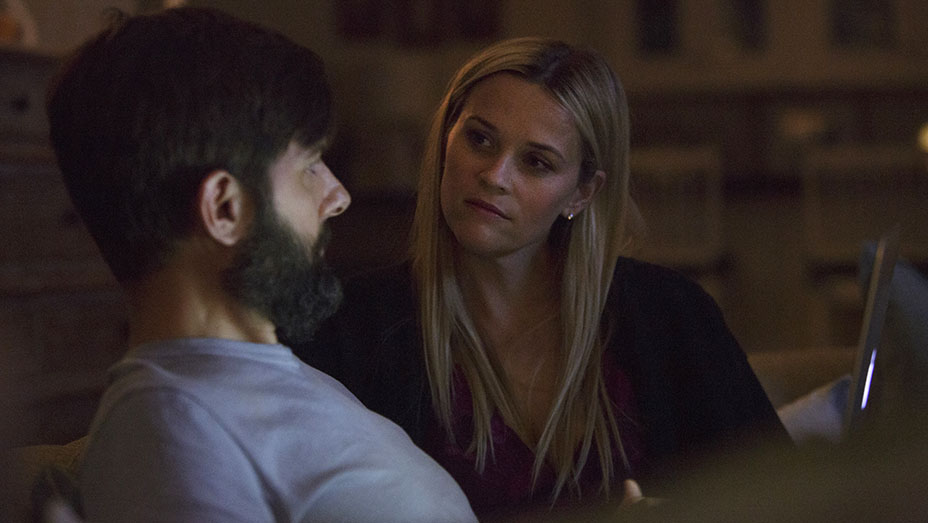 What was the dynamic like shooting with Reese? Most of your scenes are with her.

I went in as a huge fan, but then being there with her and watching her work up close was really something. It’s like watching a magic trick. I would come home and just be marveling at what I’d seen that day. There’s working with another actor and then there’s working with someone where you feel like you just saw something special. That comes along rarely. It’s really profound.

Was there anyone in the cast you wanted to film more with?

I loved working with Zoe [Kravitz] as well. I did a couple quick things with Nicole Kidman and I really loved that. She was a really cool person to chat with and had a really lovely presence on set. I’m a big admirer of her work. It’s amazing the volume of work she does. She turns in these really interesting, varied performances. Every year you can depend on having at least a couple really exciting Nicole Kidman performances and that’s a rare thing.

Do you have a favorite one?

I loved Rabbit Hole, that one really hit me. That’s a really brave, interesting performance.

Her character’s husband, Perry, is violent and abusive. Compared to him, Ed is seemingly a perfect husband to Madeline. But going forward does Ed have some secrets of his own?
Maybe! I think there is always a surprise somewhere. Did you think so?
It seems like definitely something will happen with him.
He’s the kind of person whom people look at him and maybe size him up pretty quickly and then move on. There’s a lot more to a guy like that. He’s kind of an invisible person in a lot of ways. Over the course of the show we see Ed kind raising his hand a little bit, and he wants to make a mark on the world a little bit more.
In the episode when Ed stands up to Nathan to defend Madeline and himself, he says that he was bullied growing up and is waiting for the day to kick the shit out of someone. Could Ed be pushed to the edge and be the show’s murderer?
I don’t know, you tell me. (Laughs.) The great thing about this show in the way it’s been constructed is you can see any of them pushed a little too far, and sometimes the person you least expect to be pushed to an animalistic place like that, could do it. You never know.
When you got the first script did you suspect anyone right away?
I certainly was guessing, it kept me guessing the whole time for sure. The last half of the last script, didn’t come until we were well into making the show, so we were all a little kind of guessing for a while. It’s really a tough one to figure out, which is good. I’m glad it’s not an obvious thing.
At the end of the episode, Abigail watches Ed and Madeline holding each other and then storms off upset by it. Should viewers question whether that has anything to do with Ed?
It’s totally open to interpretation. That’s one of the things I love about the show and Jean-Marc as a filmmaker. There are lots of things that happen and moves that characters make and you’re not exactly sure why they’re doing that or where that’s coming from. But keeping track of all of it is one of the fun things you can do with the show — trying to figure out the Rubik’s Cube of everyone’s psyche and what each person is going through is part of a puzzle.
Out of all the characters on the show, how does Ed rank in terms of being relatable? Do viewers know an Ed in real life? Do you know one?
It’s hard to know what people would relate to or not. I feel like all the characters are really relatable. That’s why I think the show really works.
In the episode, what would you say was the most challenging scene to shoot?
The scene with James and I was hard because I was in bike gear and bicycle shorts, and we had shot that one actually in Monterey and it was freezing! I’ll take sweltering hot any day over freezing cold. It was one of those where they call cut and you just run to a jacket. Our teeth were chattering. it was really a fun scene to shoot otherwise. James is a great person to work with and that was right at the beginning of the shoot too, so no one knew each other. By the end we were all pals, but it was challenging in that we were all just starting this long project and it was 42 degrees and I had bicycle shorts on. 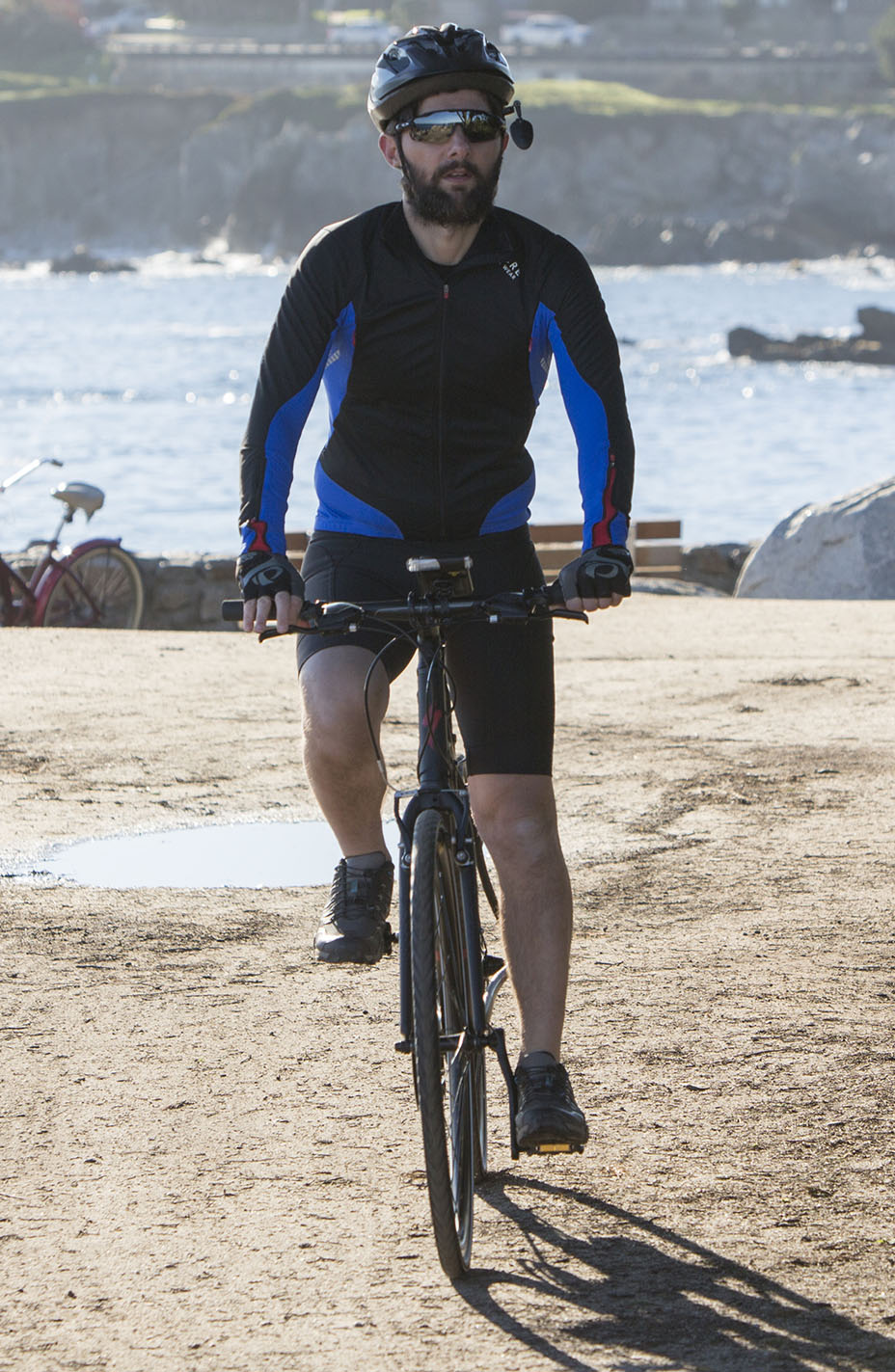 Your beard has garnered some attention on Twitter. What do you think of how viewers are responding?

I haven’t seen any of that! It was very real, and I had it for six months. I grew up right in Santa Cruz, right across the bay from Monterey. I would go to Monterey all the time. I felt like I really knew the slot this guy would generally fall into. My knee-jerk to the character was this is a guy who you know he works at home, he’s somewhat of a stay-at-home dad and [works] in technology, and so I just thought he would have a beard and a fleece vest and four different pairs of khakis.

What was Jean-Marc’s reaction to you suggesting it for the character?

Jean-Marc kind of thought that was an odd way to go. I told him all of that and he was like, “Oh, all right yeah. Let’s do the beard!” And I would have to keep it on. I wasn’t totally thinking about the fact that we would be shooting for half the year where I would just have this huge monster on my face.

You shaved it after shooting. Will it ever come back?

It got to be a little much. I like having a beard. What’s funny is when you shave a beard you realize how freezing cold your face is! The primary purpose evolution-wise is to keep you warm, to grow hair on your face. You shave it off and your face is freezing for a few days. Having a beard was nice for a while, but I was pretty over it by the time I shaved it.

The setting of Monterey plays an important part in the show. How do you think Ben, Leslie Knope and the characters in Parks and Recreation would fare in Monterey against these characters?

They would be scared shitless of these people! They’re so pure of heart and Madeline and Renata would make mincemeat of them. But I have a feeling Leslie could handle all of them. 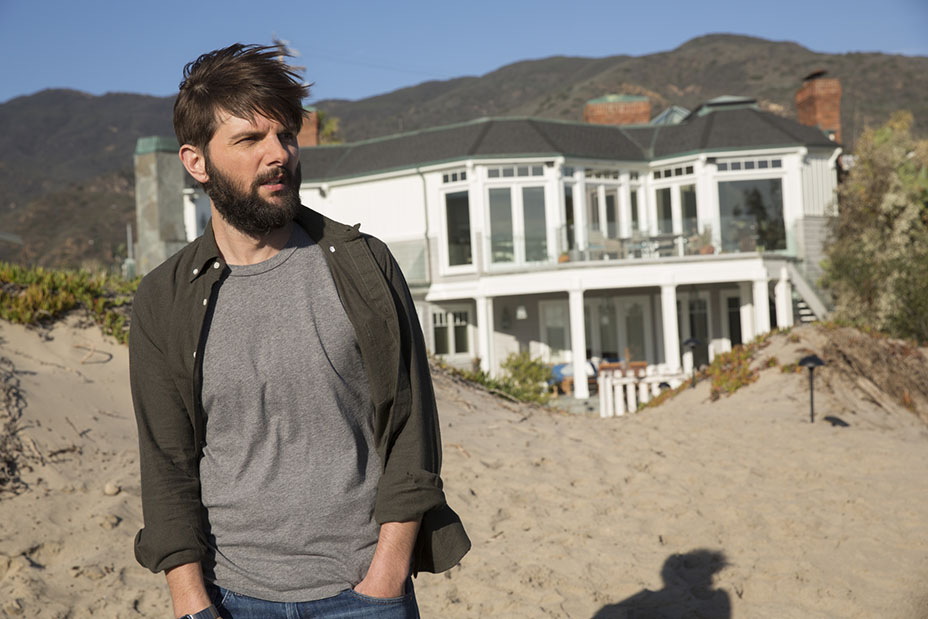