[This article contains spoilers from the first season of HBO’s Big Little Lies.]

When Big Little Lies ended its first season, it wasn’t clear whether or not the series would return for a second. Initially billed as a limited series — a “subversive, darkly comedic limited drama series,” per its first press release — the seven episodes featuring an all-star cast of Reese Witherspoon, Nicole Kidman, Laura Dern, Shailene Woodley, and Zoe Kravitz had covered the entirety of the novel upon which it was based, Liane Moriarty’s bestselling Big Little Lies.

But on June 9, the acclaimed HBO drama returns, and joining the “Monterey Five” in season two is Meryl Streep, playing a key role. Before she stirs up drama for the California mothers, read The Hollywood Reporter‘s refresher to catch up on all of the series’ major players, biggest twists and complicated relationships.

In the rich Northern California town of Monterey, someone is murdered at an elementary school trivia night fundraiser. Through flashbacks and police interviews with other parents in attendance, the story of what actually happened, why and who died eventually unfolds.

Madeline (Reese Witherspoon): Queen bee of the town’s wealthy mothers, has a first-grader with husband Ed and a teenager from her first marriage to Nathan. Is having an affair with a community theater director, but breaks it off.

Jane (Shailene Woodley): The newest mom in town is a quiet young single mother whom Madeline takes under her wing. Her son, Ziggy, is the product of a rape when she was younger.

Renata (Laura Dern): Hard-working, fantastically successful CEO and overprotective mother to first-grader Amabella, who is bitten by a mystery classmate on the first day of school. Married to financial guru Gordon (Jeffrey Nordling). 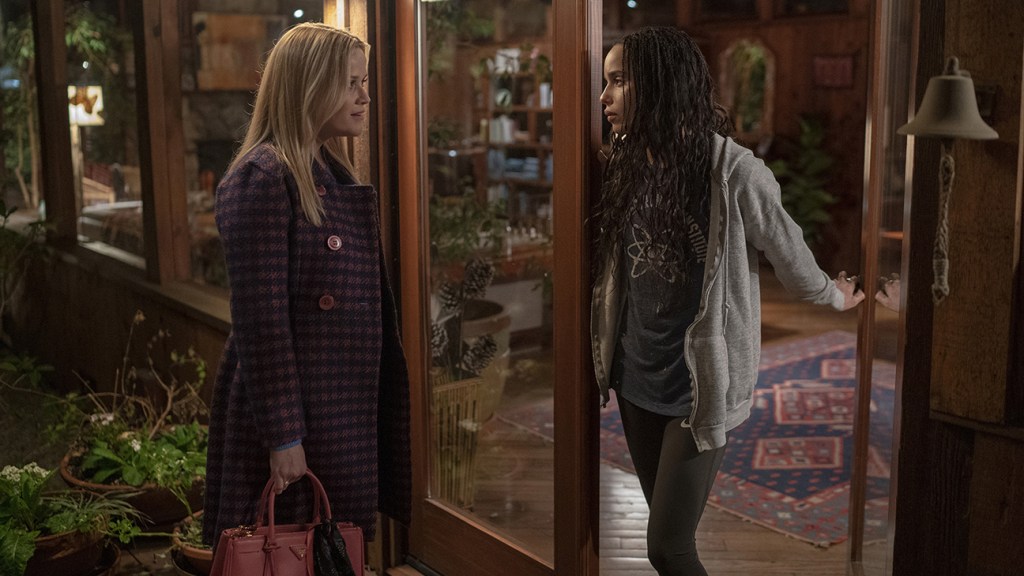 Ed (Adam Scott): Madeline’s genial, bearded second husband. Does not get along with her ex.

Nathan (James Tupper): Madeline’s ex-husband, father to a teen daughter with Madeline and a first-grader with new wife Bonnie.

Abigail (Kathryn Newton): The teen daughter of Madeline and Nathan. Moves in with Nathan and Bonnie after clashing with Madeline one too many times.

Ziggy (Iain Armitage): Jane’s shy young son whom Amabella accuses of biting her — but he insists he didn’t.

Det. Quinlan (Merrin Dungey): The cop investigating the murder that occurs on trivia night at the kids’ school.

The original novel focused on three moms in a wealthy seaside suburb of Sydney, Australia: Madeline, Celeste, and Jane. The show transposed the action to the rich oceanside town of Monterey. While the storyline of season one was extremely faithful to the book for the most part, there were a couple of minor but notable changes: The Greek chorus of fellow parents is actually present in the book — the chapters are interspersed with minor characters’ statements — but that conceit is scrapped for season two. And while Renata is a main character in the HBO series, she’s a supporting character in the book.

Madeline and her BFF Celeste befriend new mom in town Jane, whose sweet son Ziggy is accused of choking and later biting classmate Amabella (daughter of Renata) on the first day of first grade. Madeline and Celeste seem to believe Jane and Ziggy, so their kids continue to play with the newcomer. Madeline goes on a crusade against Renata when she doesn’t invite Ziggy to Amabella’s birthday party.

The high-strung Madeline also clashes with her husband (he feels like she is neglecting him), her oldest daughter (she’s too overprotective), and her ex (they disagree on how to parent Abigail, whose grades have dropped because of stress at home). 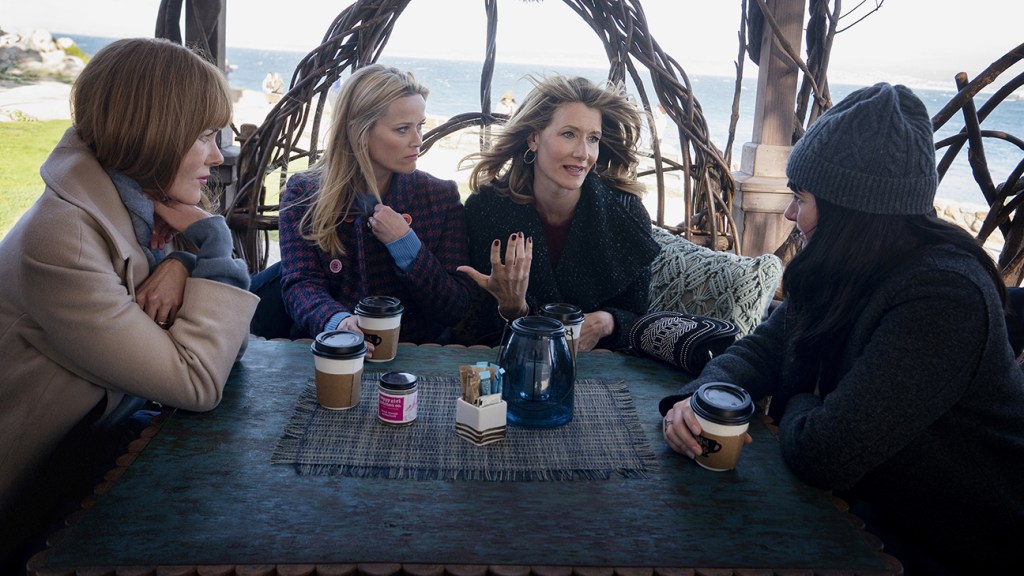 At first glance, Celeste seems to have a perfect life — attractive husband (Perry, who travels frequently for work), mop-topped twin boys — but it turns out that Perry is physically abusive. He beats her, then is kind and warm when he realizes what he’s done. It’s a cycle of domestic abuse. Eventually, Celeste consults a therapist, who encourages her to get an apartment and leave Perry. Celeste begins preparing for her new life.

Jane, meanwhile, strikes up a flirtation with the coffee guy but mostly keeps to herself. She lives a solitary life with Ziggy, whom a child psychologist tells Jane is probably being bullied himself. Jane reveals to her friends the circumstances of Ziggy’s conception: She was raped by a man named Saxon Banks.

Madeline and Celeste track down a man online whom they believe could be Saxon Banks. Jane takes her gun and confronts him herself — but it’s not him. Jane and Renata finally clash when Renata circulates a petition to kick Ziggy out of school — and when they both realize they’re just trying to protect their children, they strike a tentative truce.

In the season finale, set on the fateful Audrey and Elvis-themed fundraiser night (explaining the Hepburn getups), Celeste decides to leave Perry — but he finds out her plans. Ziggy reveals that it was one of Celeste’s sons who choked Amabella, which Jane shares with Celeste and Celeste subsequently shares with Renata.

Madeline gets emotional when she realizes Ed’s passion for her (and her relative lack of passion in return), so she runs outside for a breath of fresh air. Jane follows her to the top of a flight of stairs, where Madeline confesses her affair. Renata finds them both to apologize for blaming Ziggy, and Celeste joins the group with Perry in close pursuit. Jane quickly realizes Perry had lied about his identity — he’s Saxon Banks. He begins attacking Celeste, and the group fights him off. In the process, Bonnie pushes Perry down the flight of stairs, killing him.

Instead of telling Det. Quinlan the truth, they lie and say Perry fell down the stairs. She doesn’t seem to believe them.

All of the relationships will continue to be important in season 2, but particularly the bond between the Monterey Five now that they have a shared secret. While the reason why Bonnie pushed Perry is clear in the books (she was abused by her father as a child), it’s not established in the series — at least not yet.

Every major player is back for the second season, with the important addition of Streep as Perry’s mourning mother, Mary Louise, who’s set on getting to the bottom of her husband’s mysterious death.

Like season one, the return run will consist of seven episodes. Unlike season one, however, HBO and the creative team have made no promises as to how “limited” this series will continue to be.