Will Poulter’s casting in the Netflix interactive film, Bandersnatch, had an eerie Black Mirror feel to it for the actor. After spending the night watching Charlie Brooker’s sci-fi anthology series, he woke up the next morning to a call about meeting with Brooker and executive producer Annabel Jones about an upcoming episode. However, it wasn’t until he and star Fionn Whitehead were let into the “inner circle” that they found out the episode was actually the secretive project that would go on to open the door to interactive storytelling on TV, while sparking hours upon hours of choose-your-own-adventure exploration, fan story-mapping and critical debate.

One of the biggest questions that has been raised by critics in their reviews is whether Bandersnatch should be viewed as a game or as a film. The ambitious stand-alone movie is the result of nearly two years of work behind the scenes from Netflix and Brooker; the latter of the two wrote and coded an interactive story map that produced millions of unique permutations for the protagonist, Stefan Butler (Whitehead), as he goes about his meta project of trying to create a choose-your-own-adventure computer game aptly titled Bandersnatch. Brooker’s Bandersnatch puts viewers in control of the story by allowing them to make choices about how the story unfolds.

While the interactive element has delighted viewers — the most dedicated ones have recreated their own outlines to uncover all of the possible scenes and endings — the actors who star in the piece very definitively come down on one side of this debate.

“You can’t win. All you can do is experience. There are no winners in this. It’s not something you can complete,” Whitehead tells The Hollywood Reporter during a conversation with his co-star. Poulter agrees that Bandersnatch can’t be “defined or boxed” into any category, especially as a game: “And I think that’s one of the charms of it.”

Below, the actors go behind the scenes of Bandersnatch‘s unique filmmaking process: “It’s a lot harder than it looks,” says Whitehead. Poulter also explains his step back from Twitter after Bandersnatch‘s release and muses about the impact his character, Colin Ritman, could have on the entire Black Mirror universe; while Whitehead shares a surprising favorite ending.

'Black Mirror' Interactive Film: Inside the 2-Year Journey of 'Bandersnatch'

Bandersnatch was a secretive project that hadn’t been done before. What was the auditioning process like and how do you go about developing your characters when there are so many variations to the story?

Fionn Whitehead: The audition process, for me, was fairly straightforward. I did one audition. I did do the audition blind, as in I didn’t have a script. I hadn’t been sent sides, so I didn’t know the premise of the plot. I just knew that it was Black Mirror. When I went in for the audition, I was already a massive fan and knew it as something I wanted to be involved in. Once I got the part, I got to know more once I met with Charlie [Brooker] and Annabel [Jones] and got to read the script and was sort of let into the inner circle and the knowledge about it being interactive.

Will Poulter: I had a kind of weirdly Black Mirror experience where I was watching Black Mirror, and the next morning I woke up and poured myself a cup of coffee and got a call from my agent who said, “Hey, are you available to meet with people about a Black Mirror episode?” I was kind of freaked out that, only the night before, I’d been watching Black Mirror. I was relatively new to the party. I had only started watching a couple months before that and was a massive fan, and had expressed to my agent, over that period, a desire to do a Black Mirror, so it was kind of amazing and I felt so lucky it had come my way. I met with Charlie, Annabel and our amazing director David Slade and was really just desperate to be involved in it from there on.

Bandersnatch, given all the story permutations and possible pathways, reinvented the filmmaking process. You worked off a choose your own adventure-style script and filmed and re-filmed the same scene in different variations. What was the biggest learning curve during the shoot?

Whitehead: Being able to be flexible, because of the time constraints of the shoot and how much we had to shoot. It meant that, often, there was dialogue thrown at us at the beginning of the day that hadn’t been on the call sheet before, on top of the stuff that we already had to shoot. I like to consider myself a fairly relaxed person, and it really further taught me how to find relaxation in what could be a very stressful environment.

Poulter: It reinforced, for me, the importance of how proper preparation prevents poor performance, how they say. There is a certain amount of prep required in order to manage a character’s arc, particularly when you consider that nearly everything shoots out of sequence. But this felt like the challenge was heightened by the fact that you’re dealing with a multi-strand narrative and you’re trying to accommodate various different choices. You really have to be on your game and know all the subtle variations of each scene — just flipping through your sides that morning in the makeup chair really doesn’t cut it. You need to know the material inside and out so that you can get the various versions. We also worked at an incredibly fast pace. We went even faster than, I think, you usually would shooting television in an effort to make a film that’s interactive and four-and-a-half hours long, so it was harder to get from a technical perspective.

'Black Mirror': All the 'Bandersnatch' Endings and How to Reach Them

Netflix has said there are five main endings, but there are variants on each and some other endings are less definitive. Fionn — which endings resonated with you most and which do you want to be true for Stefan?

Whitehead: I guess the one I wanted to be true for Stefan was the two-and-a-half star rating one, where he’s sitting on the sofa with his dad at Christmas. Because he’s upset, but he’s alright. He might make another game with Tucker. That is the one I wanted to be true, because maybe he would come to realize at some point that he will get a better opportunity and he will be alright.

Charlie Brooker and David Slade spoke with THR about Colin being a trans-dimensional character. Charlie even entertained the idea that Colin could show up in future Black Mirror episodes, or be re-edited into episodes like “San Junipero” and “White Bear,” because of the Tuckersoft connection. Will — how do you view Colin’s impact on the Black Mirror universe and would you be up for more?

Poulter: That’s wild. Yes, such a lovely and exciting thought, and I’m very flattered that is even being vaguely entertained. I was just trying to do the best job I could in the moment and in the context of this film. But, of course, the option to work on anything Charlie, Annabel or David are creating in the name of Black Mirror, I’m there with bells on and acid in my tea.

Netflix surprise dropped Bandersnatch, fully intending for viewers’ heads to explode when they discovered the film was interactive. What was the experience like for you two once it released onto the world and both fans and critics responded?

Whitehead: I’ve really enjoyed seeing the responses to Bandersnatch because they’ve been overwhelmingly positive for the most part, which has been a real point of pride for me. I feel like I can take real pride in it. So that’s been really wonderful.

Poulter: It’s been really fun to see how it’s inspired conversation between different people, with everyone sharing their experiences and comparing pathways. It’s nice, I think, to engage in conversations around any medium that we ingest. Everyone enjoys the post-movie theater debate in the restaurant or talking about how they saw the latest episode and caught up on the TV series that folks might be watching. But to have two people on other sides of the planet use the Internet to compare their experiences effectively of the same film, and those two experiences can be entirely different depending on the choices they’ve made, is kind of exciting. 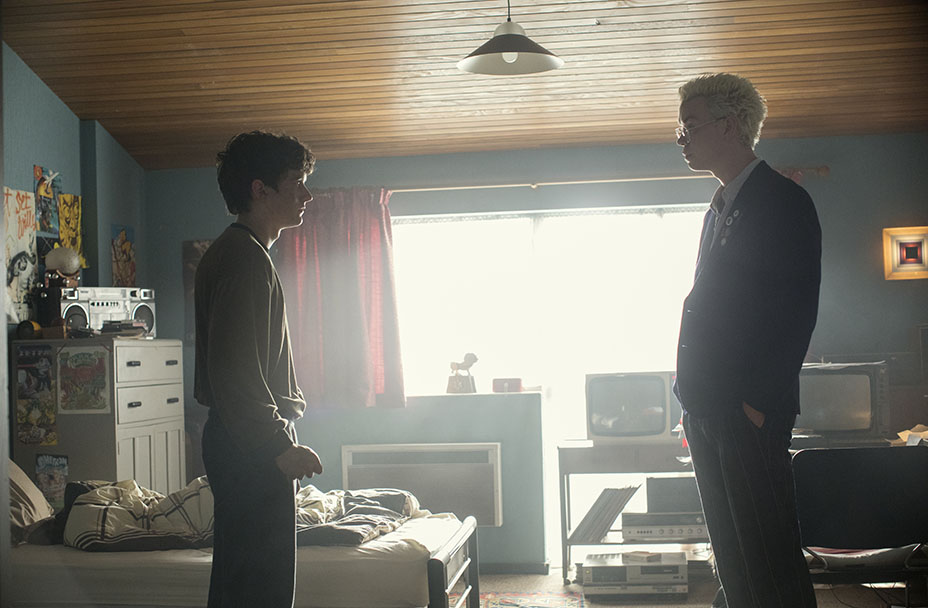 Bandersnatch opens the door to interactive storytelling. There has been debate about whether it should be viewed as a game or a film, with some critics saying it’s more enjoyable as a game or an experience. What are your takes?

Poulter: It’s funny. I’m obviously very aware of the resemblance that it has to games, and it borrows from a lot of gameplay structure, but I never thought of it as a game. And I don’t even know if I’m really tied to the idea that it’s a film or an episode of TV, or whether it can be described as an experience. It really is unique. I’m not too concerned with labeling it at all, really. And I think that’s one of the charms of it. That it can’t be defined or boxed.

Poulter: The object is not to win.

Whitehead: Exactly. You can’t win. All you can do is experience. There are no winners in this. It’s not something you can complete. So, if you can’t win it, does it count as a game? Because you can keep playing. Video games are notoriously competitive and this is not a thing which people should feel competitive about, in my opinion, though I’m sure people will find a way. I think it would take from the experience of just going through it, if you were to watch it in that competitive way.

How 'Bandersnatch' Fits Into the 'Black Mirror' Universe

Will, you took a step back from Twitter after Bandersnatch launched because you said you wanted to focus on the positive. What prompted that decision and are you happier now that you’ve been able to filter out social media?

Poulter: Yeah. As I said in my statement, it was unconnected to any of the critical or creative responses to Bandersnatch. To echo what Fionn said, I think we saw that the vast majority of conversations about the film were positive reactions and really constructive commentary. This was a sum of things that led to the decision and something I’ve struggled with for a while. I haven’t quit Twitter entirely, it was a step back of sorts. And it’s not the end. I don’t want it to be at the expense of organizations that could potentially benefit from my social media platform, so I’ll be back on social media when it’s necessary, I just felt that, personally, it was the best decision for me. I’m still a citizen of Earth.

Would you each do another interactive project? Taking into account any hesitations or questions you might have had going in, how do you weigh those now and what would you say to other actors who enter into the interactive space?

Whitehead: I would tell them that it’s a lot harder than it looks. It takes a lot of time and blood, sweat and tears, so don’t take it on lightly.

Poulter: I would echo that. Be prepared for, potentially, the hardest job you’ve ever embarked on and just be over-prepared.

Black Mirror: Bandersnatch is now streaming on Netflix. Head here for all of THR‘s coverage and more interviews about the interactive film.