A familiar voice beamed onto the USS Callister to identify himself as “King of space” in the final moments of the Black Mirror season-four space opera.

After overthrowing their tyrant of a captain (played by Jesse Plemons) and voyaging to safety, the crew, now led by Captain Cole (Cristin Milioti), encounter their second player in the virtual galaxy they will now call home, identified as Gamer691. “So are we going to blow each other, or are we going to trade?” asks the gamer, telling the spaceship to get the hell out of his quadrant before he “blasts them to shit.” Unfazed by the “stupid little boy,” Captain Cole tells the crew to hyper-warp the ship away from the second human who is attempting to control them, solidifying the episode’s rare happy ending.

The one-minute cameo was kept a secret until the fourth season of the Netflix anthology launched Friday — with even the cast left in the dark when filming. They only found out when creator Charlie Brooker premiered the episode to a closed audience that the voice belonged to Aaron Paul.

“We went through about three versions looking for the right accent,” Toby Haynes, the director of “USS Callister,” tells The Hollywood Reporter of casting the Breaking Bad star. “Initially we were a bit broader in the comedy and Charlie was uncomfortable with it; he didn’t want to talk down to gamers.”

They wanted a voice that would embody their love for computer games and those who play it, but one that would also serve as a disappointment to the crew when they finally talk to a human being that isn’t Daly. The CTO of a virtual gaming company had created his own version of the game and trapped virtual clones of his coworkers on the spaceship; digital copies that are fully conscious of the outside world as they fly through the cloud.

“It was a hard balance to get; where the voice wasn’t patronizing and yet was still a letdown,” Haynes says. “You get this idea of a slacker voice and when I asked Charlie what kind of accent he wanted he said, ‘How about Jesse from Breaking Bad, like, ‘Hey ya’ll‘? We mentioned that to our casting director and she suggested we just ask Aaron, so we picked up the phone and he said yes. That shows you the power of Black Mirror.”

As it turns out, Paul was a fan of the show.

“Netflix said that he’d said something about Black Mirror,” Brooker previously told THR, adding that it was a huge surprise for Plemons — who had worked with Paul on Breaking Bad — when he heard his voice at the first screening.

But Annabel Jones, who executive produces with Brooker, said getting him on board came with a condition, one which they thankfully were able to accommodate given that they were just using his voice.

“He very sweetly said he would only do it if it didn’t take him out from doing another episode,” she says.

Haynes initially wanted to try to disguise Paul’s recognizable voice, but Brooks and Jones vetoed that idea: “I wanted to make it a bit squeakier, but they were right. You want to be able to recognize it. Why get him if you’re going to disguise it?”

That final encounter is meant to show that even though the crew managed to escape Daly, the rest of their existence within the multiplayer game universe is going to have other challenges ahead.

“They are at the mercy of the game, so people are looking at them as entertainment,” Haynes explains of the humans they will encounter. “It could be a rough life for those guys as they venture on into infinite space, one populated by gamers who just want to kill them or steal their assets. It could be quite disappointing for them, but they are free. They are free of Daly, at least.”

The second hidden cameo of the episode came in a blink-and-you’ll-miss-it moment earlier on when showing some of the co-workers at Callister Inc., the gaming company run by real-world Daly and CEO James Walton (Jimmi Simpson), who was also one of the clones on the ship. Kirsten Dunst, the actress-fiancee of star Plemons, quickly walks through the office while Daly longingly looks on at his socializing co-workers.

Haynes called the cheeky Dunst cameo a “Where’s Waldo?” moment of the episode, one of the many series Easter eggs that he had to fight to keep in the final cut.

“She was sitting on set with Jesse and was like, ‘Can I play?'” Haynes recalls when filming the real-word scenes, which took place in January at a studio in London. “I said, ‘sure,’ and we placed her in the background. But when I watched the first take she wasn’t there — continuity had taken her out because she wouldn’t be in any of the other shots that day and I went crazy! I told them, ‘Come on! I only need one shot!'” 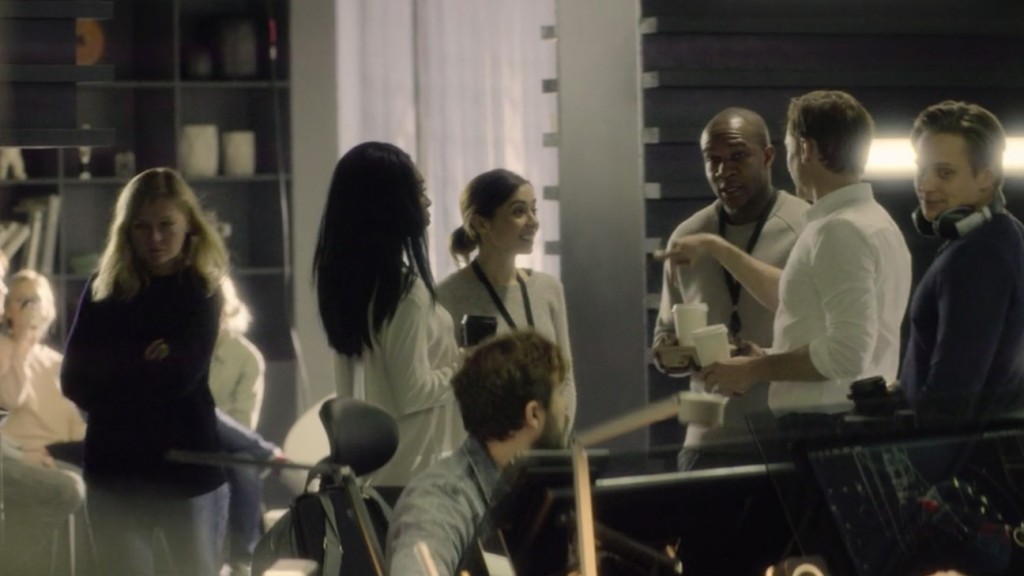 Black Mirror‘s fourth season is streaming now on Netflix. What did you think of “USS Callister“? Tell THR in the comments below and head to Live Feed for full show coverage.

Alex Ritman contributed to this story.