Amid Black Mirror’s bleak universe, one episode has emerged as a beacon of hope.

“San Junipero” — the fourth episode in the newest season of the Netflix anthology series — tells the story of two women (Gugu Mbatha-Raw and Mackenzie Davis) who fall in love in an alternate virtual world. The tech-twist is that the town, San Junipero, is a computer-generated universe that comes with an afterlife option. The pair, who are actually near death in reality, decide to spend their eternity there together as youths, their consciousness forever uploaded to a cloud database.

The third season of Black Mirror was released in full on Oct. 21, but “San Junipero’s” existence as a shining light amid Charlie Brooker’s sometimes prescient and always dystopian series (a U.K. import now streaming in full on Netflix) now takes on a different meaning in the wake of President-elect Donald Trump. The nostalgic trip to the California-inspired town of San Junipero rewinds the lives of its aging characters by decades, placing them mainly in the year 1987 as ‘80s fashion, film tropes and songs abound. The nostalgic, feel-good story and its surprisingly happy ending have left viewers elated, making it the season’s most-talked-about episode.

“When I read the script, I could tell from the first couple of lines that Charlie was setting up this 1980s, very sort of John Hughes-ey world,” director Owen Harris tells The Hollywood Reporter. “It was the films that I grew up with and I remember that it was a period in life, and definitely as a person in cinema, that was really optimistic. Even if you’re sometimes dealing with darker subjects, there always seemed to be this strange optimism.”

Belinda Carlisle’s “Heaven Is a Place on Earth,” the episode’s apt theme song, kicks off a soundtrack that includes ‘80s classics by The Smiths, Pixies and Madonna, with the 42 songs now making the rounds via Spotify after being shared by Brooker on Twitter. The episode also upends television’s Bury Your Gays trope, by giving the same-sex couple a happy ending in a grim year for LGBT characters and their fate on TV.

Speaking to THR as anti-Trump protests abound across the divided country and many search for signs of hope, Harris stresses the uplifting message “San Junipero” brought to the Black Mirror world.

“I really wanted to create something that felt different from what we’re used to at the moment, and I think that’s what’s really refreshing about it,” says the helmer about viewers continuing to find, and rewatch, the episode. “It’s this world where you’re allowed to dance around to Belinda Carlisle, it’s a world of guilty pleasures but, because of the look and the feel of it, it’s larger than life, which makes everything a little bit more optimistic.” 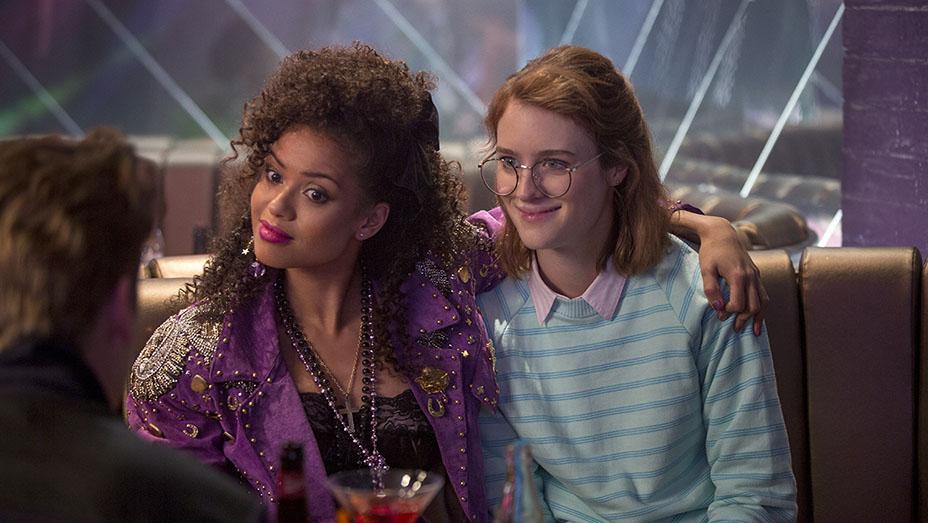 On Election Night, Black Mirror took to Twitter to express the thoughts of many voters as they watched Trump take a lead in the electoral vote, tweeting, “This isn’t an episode. This isn’t marketing. This is reality.” Brooker had looked back on his second-season episode “The Waldo Moment” and its satirical character predicting the rise of Trump, and post-election viewers have taken to social media to credit the series for foreseeing the possibility of a president-elect Trump.

“Black Mirror has always been about us holding up a mirror to ourselves and then seeing what sort of reflection we get out of that,” says Harris, who also directed season two’s “Be Right Back.” He compares America’s shock about the election to living through Brexit, when the U.K. voted to withdraw from the European Union this summer. “It’s the same as Brexit. You then start to settle down and think about it and how, really and truly, this is a reflection of who we are right now. As shocked as we might be, at some point we’ve got to open our eyes to it.”

He continues, “Maybe it’s a good thing, maybe it’s refreshing to have to stare in the face what’s going on around us. Trump in the White House, the U.K. voting to not be part of Europe — as much as someone like myself wouldn’t want any of those things, it is going on in the world. We’ve got to open our eyes. Maybe further down the line we’ll realize what a mistake we’ve made and we’ll have to start doing something about it, rather than keeping our eyes closed and hoping everything is going to be alright.”

Also on Election Night, the West Coast saw the hashtag #Calexit trend on Twitter. Post-election, Californians have launched a continued movement, calling for the state to exit the United States as Great Britain did with the EU.

“California as its own entity, why not? That’s what’s going to happen in the end, everyone is going to say, ‘Look, let’s just accept that we’re all not going to agree. So instead of having a big fight about it and getting all upset, why don’t we all accept it and find another way of doing it?'” Harris says about Calexit. “I’m a big fan of Europe and I was really disappointed we left, but I wouldn’t be surprised if in five or six years time we’re not the only country making this decision.”

Though Harris says he’s not at all surprised by California’s proposed solution, he can’t help but look to the disturbing elements lurking beneath the surface in the election — similar to the unsettling ways of a Black Mirror episode. Even in San Junipero, Kelly (Mbatha-Raw) and Yorkie’s (Davis) happy ending is plagued by a bittersweet feeling for Kelly, whose late husband and daughter did not have the option to pick the San Junipero afterlife.

“You can’t hope there’s going to be one-size-fits-all, and at the moment I suppose what’s going on with Trump and America, people have come out and said, ‘We don’t want what was there before,'” says Harris. “The reason why it feels wrong is you sometimes feel these people have been lied to a little bit and the same with Brexit. The people who have come out and said, ‘We want something different,’ don’t quite exactly realize the difference that it is they are voting for.”

'Black Mirror' Creator on How He (Unknowingly) Predicted the Rise of Donald Trump, Season 3