Before the fourth season of Black Mirror launched Friday, the dystopian anthology series had only delivered one happy ending.

Until the Emmy-winning “San Junipero” episode of season three, the cardinal rule of Charlie Brooker’s Netflix series had been to expect a bleak moral of the story, one that is always accompanied by a shock twist. But the series, which pairs techno-paranoia with human potential, upended its golden rule with the final moments of the love story between Yorkie (Mackenzie Davis) and Kelly (Gugu Mbatha-Raw), two dying women who found eternal love when uploading their consciousness to the cloud so they could live out all of their days in the simulated ‘80s resort town of San Junipero.

The optimism of the episode, which aired shortly after the U.S. 2016 presidential election and in the wake of Brexit, spurred the LGBTQ-friendly love story to become an instant cultural phenomenon. Now, several season-four stories have the potential to do the same.

When plotting the stories in the new season, which is now streaming in full on Netflix, Brooker had said the success of “San Junipero” might influence his creative thinking, hinting at more happy endings potentially to come in the new batch of six episodes. Among the group, he delivered on that inference with three episodes and “Hang the DJ” is the most hopeful of them all.

Brooker and executive producer Annabel Jones have referred to the episode, starring Georgina Campbell and Joe Cole, as Black Mirror‘s rom-com. Though the series has taken on romance in previous stories (“Be Right Back,” “The Entire History of You” and, of course, “San Junipero“), “Hang the DJ” embodies the most recognizable of romantic comedy tropes as a commentary on online dating. And it’s timely ending is all the more satisfying given the female protagonist’s ultimate win against an oppressive system.

“I loved the way the story was written because it was the perfect picture of that first date,” Campbell, who plays hopeful single Amy, tells The Hollywood Reporter. “Sometimes you see a first date and it’s a little bit more romantic and easy. I like the fact that this went right to the fact that it was really, really awkward (laughs).”

When viewers first meet Amy (Campbell), she is, in fact, on an awkward first date with her first “match” Frank (Cole). Though it seems that an app has paired them together, it gradually becomes clear that Amy and Frank live in some sort of world that is governed by this dating system. Only given 12 hours until their relationship will expire, Amy and Frank enjoy a date that is, by all accounts, a nice night together. Instead of having a one-night stand, they fall asleep side-by-side, touching hands.

“I think we’re kind of beyond romantic comedies about the meet-cute where you bump into someone at a library or someone accidentally pours coffee over you and that’s how two people meet,” Campbell says of the influence that online dating is having on entertainment. “Now meet-cutes are over the phone and you can’t see someone in an app. Getting a match is the modern meet-cute and I thought [Brooker and executive producer Annabel Jones] did that really well.” 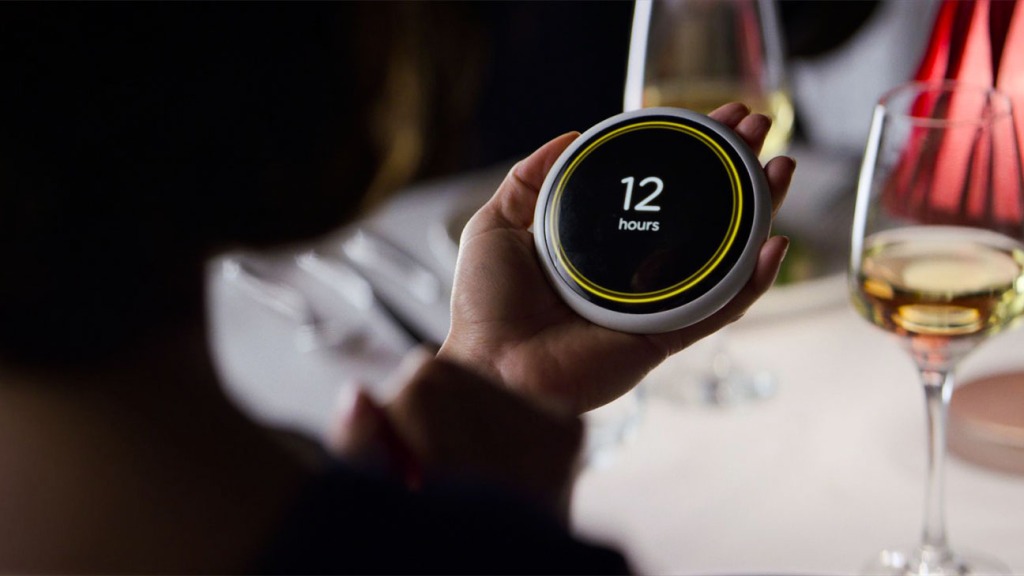 The expiration date on their relationship, viewers come to learn, is because the algorithm pairs people with as many matches as it takes in order to find the perfect one. The system logs likes and dislikes, habits and connections by putting the single through relationships that can last anywhere from weeks to years. After their first date, the story begins to shift more to Amy’s perspective, though it follows both Amy and Frank as they continue to work the system and bounce from one sub-par relationship to another.

“The idea of option paralysis and having too many options at your fingertips almost jolts your thinking about how online dating can be quite harmful,” Campbell says of the darker side of the story. “That means you’re perhaps not taking the time to get to know people properly or have a proper lasting relationship. Where you’re not giving enough of chance to someone or not spending your energy on one person, and unable to make that connection you are wanting to make. I really haven’t seen anything like ‘Hang the DJ’ yet.”

As the dates continue, time passes but Amy and Frank don’t seem to age. Everyone around them, Amy begins to realize, seems to be in on the end game. Finally, they get matched together again and this time, they realize that they are in love. But when Frank succumbs to his insecurities and checks their expiration date when they each agreed not to, the algorithm erases the years they would potentially have together due to his betrayal. Their last hours are ruined when Amy discovers Frank’s mistake, and once again they are spit out into more awaiting matches.

“She seemed so hopeful and was very open and excited about the situation in the beginning, when we don’t even really know what it is. A dating park for single people, maybe?” says Campbell. “Then it becomes a struggle because it all becomes meaningless. By the end, she has this realization that she wants Frank. I think it’s really lovely, especially that the female character is quite in control of what’s happening in the plot and she starts to realize what’s going on in this world.”

It is Amy who eventually realizes that their world isn’t right. When reuniting once more, she leads Frank to the end of their town, the wall they have been warned not to climb over, and her persistent questioning causes a break in the system. Campbell says of the portrayal, “She is no longer allowing this system to keep controlling her. You shouldn’t be relying on a system to tell you how you feel — we have human instincts; you know how you feel and that’s what you should follow.” 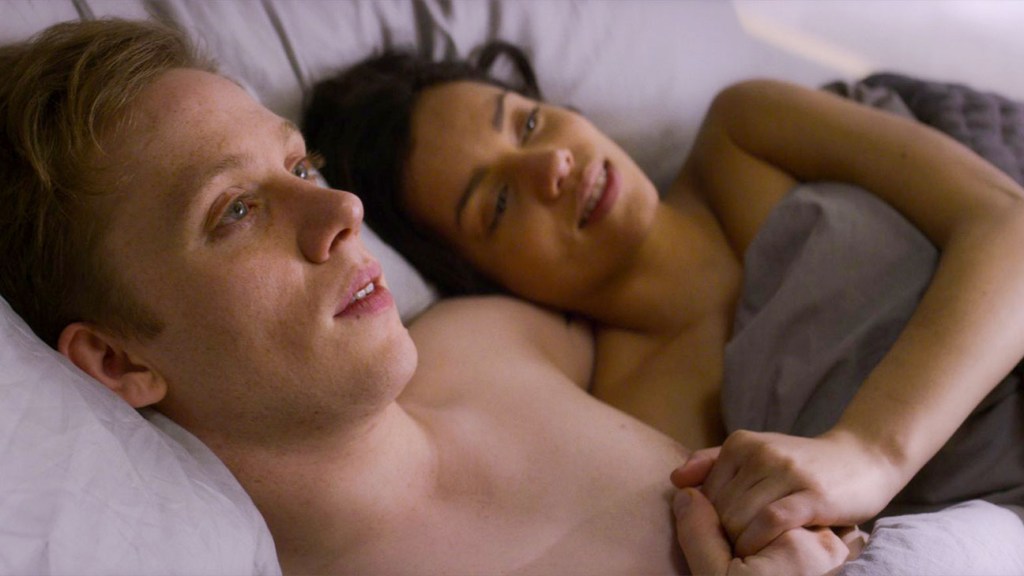 Where her heart leads her, however, is into obscurity, as once Amy figures it out, she and Frank and their world disappear. When the story widens out to Amy receiving Frank as a 98 percent match on her dating app in a bar, it is understood that the Amy and Frank of the episode were digital simulations being used over and over by a dating app to find the statistics of their connection. The concept of digital consciousness remains a theme throughout season four, also popping up in episodes “USS Callister” and “Black Museum,” and in this case, simulated Amy and Frank had rebelled 998 times out of 1,000 against a system that was keeping them apart. The real-life match at the end of the episode elicits large awaiting (knowing?) smiles from both real versions of Amy and Frank — a happy ending, simulations aside — and the “Hang the DJ” chorus of The Smiths’ rebellious 1986 song “Panic” blares as the end credits role.

“When we were filming the ending, as we were getting up to that point, we were worrying about the payoff,” Campbell admits. “Will people get it? Will it make sense? Then when I finally saw the edit, they really smashed it. It’s a really great ending and I think it’s nice that in these months it’s a ray of hope.”

Campbell says she can’t predict how viewers will react to “Hang the DJ” — “What’s great about Black Mirror is how divisive the audience is,” she says — but she can’t help but have a soft spot for her character. “It’s such a treat when you get a script where the character is well-written and especially with female roles,” she says. “I was so happy when I read Amy because she’s such an interesting character; she’s fun and goofy they wrote her really well. When you get that, you want to just run with it.”

Amy is one of six female protagonists to emerge from the new female-led season, a casting choice that Jones said wasn’t even intentional. One of the other episodes, “Crocodile,” was meant to star a man, but then Andrea Riseborough asked if they would consider her as the lead and they responded by saying: Why not? “I think it’s great that there is no reason and that it can just be the best person who can tell that story,” says Campbell of Brooker’s and Jones’ choices with Black Mirror. “If it’s a woman, great; if it’s a man, great. I love that there was a woman who wanted to do it and there was no reason why they thought that she couldn’t.”

What did you think of “Hang the DJ”? Tell THR in the comments below and head here for more Black Mirror coverage.