[This story contains spoilers from the season one finale of Showtime’s Black Monday.]

Although Showtime’s Wall Street comedy Black Monday has been building to a real-life event — the worst single-day stock market crash in history on Oct. 19, 1987 — the show’s true stakes lie in the question of which fictional character falls to their death outside the stock exchange on that day. Sunday’s season one finale resolved both that mystery and the long-simmering triangle of loyalties between reckless power trader Mo (Don Cheadle), his colleague and unresolved love interest Dawn (Regina Hall) and his protégé Blair (Andrew Rannells), who has turned vicious following the discovery that Mo has been playing him from day one.

The tables are turned on Mo in every conceivable way by the end of the season: he’s fired by Dawn and Blair, who reveal that they’ve been conspiring against him for weeks, and has to contend with the the return of his supposedly dead, definitively evil father figure Rod “The Jammer” Jaminsky (Bruce Dern). In a final blowout that typifies the show’s dark flavor of absurdist comedy, Jammer pulls a gun on Mo, Blair and Dawn just as Keith (Paul Scheer) is contemplating suicide from a balcony, sparking a struggle that ends with Mo sending Jammer falling to his death.

“There’s something very classic ‘80s and Star Wars-esque about the idea that this father figure is the person Mo has to defeat in order to get to the next step of his life,” co-creator David Caspe tells The Hollywood Reporter of that climactic moment. With the SEC closing in, Mo shares a long-overdue kiss with Dawn before fleeing the city in Blair’s Honda (a beat that brings the pair full circle from their conversation at the end of the pilot). Meanwhile, Blair takes his place at the Jammer Group alongside Dawn, who already seems to be second-guessing her decision.

Below, Caspe breaks down the resolution to the death mystery, Mo and Blair’s mirror opposite arcs through the season, and his and Jordan Cahan’s plans for a potential second season.

Rannells has mentioned that the identity of the person who died changed during production. What was the change?

When we wrote the pilot, we had some ideas of different people that it could be, but we didn’t know for sure at that point who we wanted it to be. Inevitably as you break out a season, things change. There were a few people we thought it could be as we went through the season — I feel bad saying who it would have been at different times, because I don’t want that to feel like a judgement on a character or an actor, it was all story-based. But slowly it started to evolve into Jammer making the most sense as the person who dies. He’s Mo’s father figure, and there’s something very classic ’80s and Star Wars-esque about the idea that this father figure is the person Mo has to defeat in order to get to the next step of his life. He has to finally shed this really detrimental father figure who’s taught him nothing but horrible lessons.

Jammer dying is also the least tragic option, whereas it being Mo, Blair or Keith is a much bleaker ending. Was that on your mind too?

Yes. As we wrote the characters we got more attached to them, and the actors loved each other, so that definitely factored in. But story-wise it really did feel like the character that made the most sense was Jammer. In some ways, having it be one of the other characters might have felt forced or unearned, and this outcome felt like it worked best with the story that we told through the season. Just from a practical standpoint, everybody is so great in the cast — and obviously Bruce Dern is amazing too, but he’s not part of the core cast — and as much as it would be a great Game of Thrones move to kill somebody off, Game of Thrones has 100 main characters, and we’ve got our core four or five. If we are lucky enough to have another season, it does feel like these are characters we fell in love with, and that the audience fell in love with, so we would want to get to continue the story with all of them. Now with that being said, one of the Lehmans may or may not have perished! We’d reveal that very early in the next year. 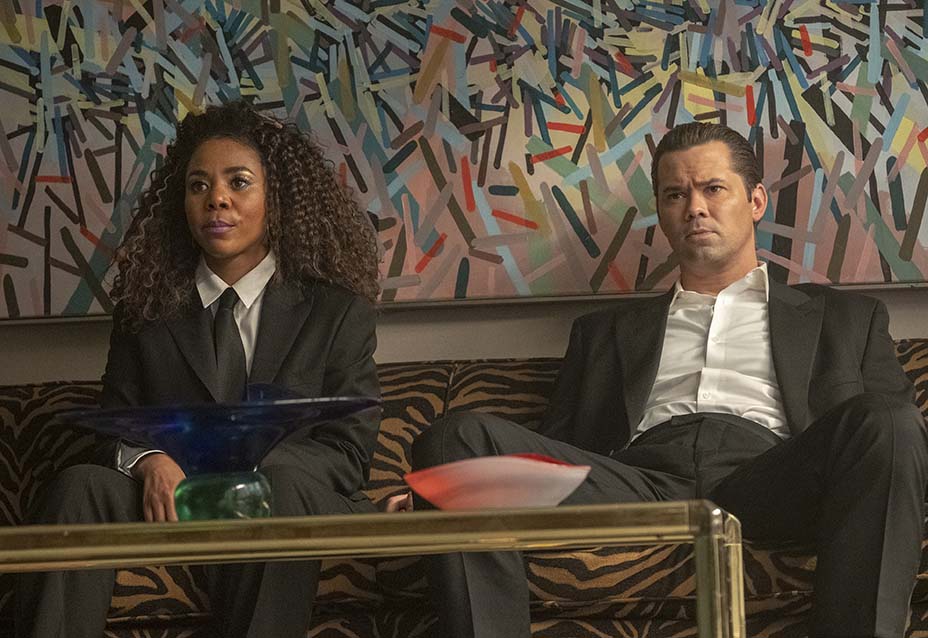 On the subject of season two, do you have any sense of how likely a renewal is?
We don’t, we’re just waiting, hopefully. It seems like we got some great critical response, and the fans who have found the show seem to really love it, and watching on Twitter it seems like there’s quite a few people who are into it and are wondering why nobody’s watching or has heard of it. So hopefully if we were to get another season, people would start to hear about it. A lot of times if you don’t break out right away in a crazy way, it’s between seasons one and two that people find stuff. The show is obviously written as incredibly serialized, and I think in some ways getting to watch a few in a row might be helpful for a viewer. In terms of twists and turns throughout the year, it’s definitely built to be binged.
What plans do you have for the storyline of season two?
Jordan and I haven’t spoken since we finished editing [season one] a week ago, so we’re both just taking a break, but we do have a few ideas. Now that Dawn and Blair have taken over the Jammer Group, I’d love to see what that looks like. Those two running a Wall Street trading firm in the ’80s, they’re the two least likely types to have been in charge back then, so I think that would be interesting. And then just Mo’s climb back to the top. I think in a lot of ways Mo enjoys the climb more than the view from the top anyway, so now we’d get to see him climb his way back up. That’s the part of his backstory we never got to see: you saw who he was before he went to prison, and then what he became after his conversations in prison with Jammer turned him onto Wall Street. It’d be interesting to see how Mo climbs now, and that’ll give us a view into how he climbed initially.
The question of Blair’s sexuality became a big part of his arc, and the finale strongly suggests that he’s gay. In your mind, is that definitively the case?
He’s figuring it out, which is something that we really worked on a lot with Andrew and with our writers that have gone though similar realizations, and what they said was that it is not necessarily clean and quick. We thought the most interesting story to tell with the character of Blair was just that it is ambiguous, and he is stumbling through it a little. We felt it would be false for him just to wake up one day and say, “I’m gay, I know it, and I’m done.” The way we and our writers and Andrew wanted to tell the story was a little bit more ambiguous. Again, with it only being 10 episodes and 12 months, I think it would have felt false if it was handled too quickly; in the pilot, he’s engaged and maybe has always had the feeling that something’s not quite right about his relationship with Tiff, but to take him from there all the way to being positive [about being gay] and out felt too quick to everyone. Obviously it’s very personal and everybody’s experience of it is different, but for the way we wanted to tell the story with Blair, it felt right for us. 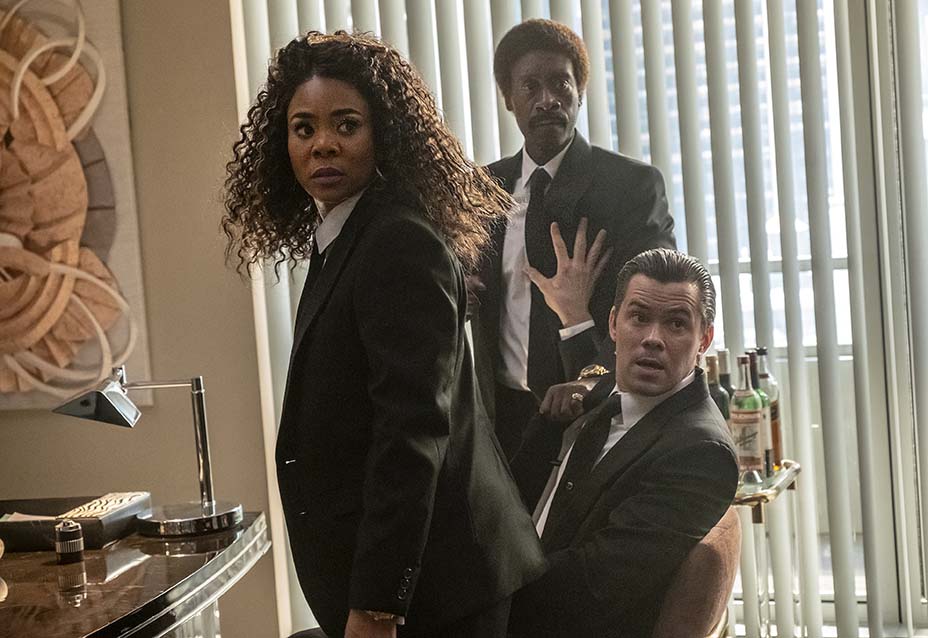 Blair undergoes a pretty dramatic transformation through the season. How did you approach taking him from a naive rookie to this ruthless Wall Street shark?
Taking Blair from so innocent to so evil was our biggest challenge, in that the show is only ten episodes and covers a year. What can happen to this guy in that time that can change him so much? But that said, I think if anything can it’s 1980s Wall Street, or even today’s Wall Street, to be honest. There are probably few professions that give you such a dark view of the world. When you come out of college you have a lot of ideas about the world, and maybe a belief that people are inherently good, and then on Wall Street you see capitalism at its absolute wildest and most careless, and I think that can change a person. Blair is smart enough to know, once he sees what the landscape is, that he has to adapt or he’s done. So he chose to adapt and maybe went a little too far. But his fiancee is also monstrous, and he finds out that her parents are terrible, so I think Blair just happened to see so much negativity in the world so quickly that it stunned him into submission.
Mo and Blair’s relationship has really soured by the end of the season. What does that dynamic look like going forward?
Going into the season, we viewed it as ideally Blair would break bad, and Mo would break good. I don’t know how good Mo broke, but I think he broke a little good! We did get him to a place where he proposed, and he tells two people he loves them in the finale — he tells Keith and he tells Dawn. That’s not really a phrase you would have expected to hear from that character early in the season. And I believe he got to a place where he really did love Blair as well and didn’t want to hurt him any more, but everything was in motion by that point, and it was too late.
I think in the end, Blair gave as good as he would have gotten. You can say that Mo deserved it, and he did, but Blair’s completely destroyed Mo’s life. Again, Mo was planning to do that to him, so it’s justified, but I think they’re probably even at this point. Blair took all Mo’s money, he basically ruined the one relationship that he had a chance at with Dawn, and though not Blair’s fault, the Georgina play in general put Mo in the crosshairs of the SEC. Mo’s life couldn’t really be in a worse place by the end of the finale, and I can’t imagine he doesn’t want revenge. I would not want to be on the other side of Mo’s vengeance. We’ve already seen that he seems willing to do anything, and if he’s willing to do anything when he’s the 11th trading firm on the block — which is probably a lot of money and represents him doing pretty well — then I can’t imagine what he’s willing to do when he’s got nothing to lose.
This interview has been edited and condensed for clarity.