Despite taking its title and premise from a real event — the October 1987 stock market crash so devastating that it remains the worst day in Wall Street history — Showtime’s Black Monday is based on reality in the loosest possible sense.

Its ragtag group of traders, led by Don Cheadle’s brash Maurice “Mo” Monroe, are all fictional, as is their second-tier firm and its doomed, often nonsensical mission to take on the financial establishment. As heightened as its comedy often feels, the show also gets at something real about 1980s Wall Street in depicting a mentality of wild excess, reckless ambition and business decisions fueled primarily by cocaine.

“The show is, I would say, at least a foot off the ground, and very much a satire,” co-creator Jordan Cahan tells The Hollywood Reporter. “None of the characters are based on anyone real, in terms of specific traders, but we had heard a lot of stories about Wall Street at the time, and read a lot, and mixed it all together into our own characters and voices.”

Much of the surreal pleasure of the show comes from its blending of fact with fiction: In the Jan. 20 series premiere, Mo pays a visit to “The Lehman Brothers,” who in this universe are actual twin brothers named Lenny and Larry Lehman. Played by Ken Marino, the brothers are unabashedly elitist buffoons who take smarmy joy in their gatekeeper status and can’t wait to put Mo in his place.

“It felt like the fun way to do the Lehman Brothers [firm], who in 2008 were very real villains that took down the economy, was to harken back to that ’80s trope of evil twins,” Cahan explains. “It felt like the villains in an action movie of that era.” 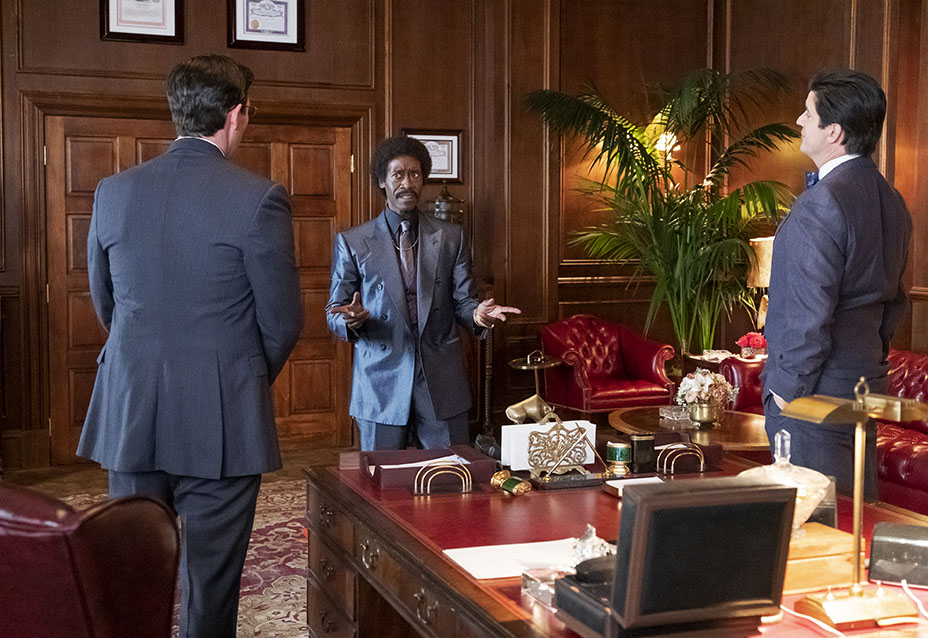 That referencing of ’80s tropes carries through the show and inspired the core cast of characters. “Maurice Monroe’s trading firm, the Jammer Group, are the underdogs, very much the Bad News Bears, Revenge of the Nerds, Animal House [mold]. And we have a slightly modern sensibility in that the characters can comment on the era, despite the fact that they’re in it.”

For Cheadle, the show’s blend of reality with invention was “a lot of the fun of it. To play with the fiction and factual aspects of it, and use this particular group of characters — who wouldn’t have existed in the way that they exist in this show, all together, under one roof, in a trading house on Wall Street — to talk about a lot of things. What these characters would have been pushing up against, and trying to claw their way through, just made a lot of grist for the mill.”

Even Black Monday’s location is a creation of sorts: Despite appearances, the show was not filmed in New York. The premiere’s opening sequence, which takes place on the day of the crash and shows a desolate, graffiti-covered Wall Street populated by weeping traders, was shot on a backlot in Los Angeles.

“The pilot was shot in what was actually the L.A. stock exchange, and then when we went to series they built a trading floor,” says Andrew Rannells, who plays a newly hired Wharton graduate who is taken under Mo’s wing for wholly manipulative reasons. “Being a New Yorker, I was hopeful that we would be filming here, but it’s just the reality of finances in television, and they also were saying that downtown L.A. actually looks more like New York in the ’80s at this point.”

In order to create a convincing period version of Manhattan’s financial district, the post-production team also used archive footage. “They found stock footage from 1987 in New York, footage of people walking on the streets, and were able to blend it in with what we did,” Rannells says. “So some of those establishing shots that look like we’re downtown [in Manhattan], that might be a building in Koreatown in L.A., and then they married it with footage from the period.”