Before the premiere screening of Showtime’s new comedy Black Monday, co-creator Jordan Cahan acknowledged he and David Caspe had been working on the series for a very long time. With the series set to make its debut on the cable channel on Sunday, Jan. 20, Cahan dug out the duo’s first email about the project.

“[Caspe] wrote me: ‘Us laughing like idiots today about this Black Monday stupid shit got me really excited,’” Cahan read. “‘I’m sure it’s impossible, but I can’t wait to try to put something that’s this insane on TV.’”

Black Monday, which stars Don Cheadle, Andrew Rannells and Regina Hall, kicks off on Oct. 19, 1987 — aka Black Monday, the day the stock market suffered its worst one-day loss (in percentage terms) in history. The series then backtracks to show how those events came to be.

Despite the decade-long wait for the show to get picked up to pilot — Showtime ordered the first episode in 2017; it was picked up to series in 2018 — Caspe maintains not much changed from their original plan.

“It was not so much a huge redevelopment as waiting around for the right time for it to get made,” he tells The Hollywood Reporter. “A big part of that was [executive producers] Seth [Rogen] and Evan [Goldberg] reading it and wanting to direct it, which was great. That brought it back to life. We worked on it for years, and it was just a process trying to get it to a place where everyone was ready to make it.” (Both Caspe and Cahan worked steadily in the years between the initial thought and Black Monday eventually coming to fruition, including a collaboration on NBC’s Marry Me.)

Showtime CEO David Nevins acknowledges that Rogen and Goldberg brought a vital shift to the comedy. “I didn’t want to make Wolf of Wall Street,” he says. “Seth and Evan came at it with The Bad News Bears of Wall Street, and that pushed it over the top. I always knew it was very funny. I’m really excited to be putting on a comedy. This show is really funny, it’s really fast. This is the kind of comedy I love.”

Rogen and Goldberg, whose television production roster also includes AMC’s Preacher, Hulu’s Future Man and the upcoming Amazon Prime series The Boys, gravitated toward Black Monday “because there’s a trend in comedy right now to be a little more serious at times,” Goldberg told reporters. “People like that whole package. A bit ago it was more about the comedy itself. Now you can kind of do both.”

And when it comes to figuring out what show to get behind, “mostly, it’s would we watch it?” Rogen added. “And in a slightly sadder sense, would we be jealous of [someone else making it]? I’m not as proud to admit that, but it fuels a lot of our decisions.”

The duo’s call to sign on ended up putting another piece of the puzzle in place: Nevins credits Rogen with suggesting Cheadle for Maurice, the head of Wall Street firm The Jammer Group, who is equally outrageous, manipulative and good at his job. 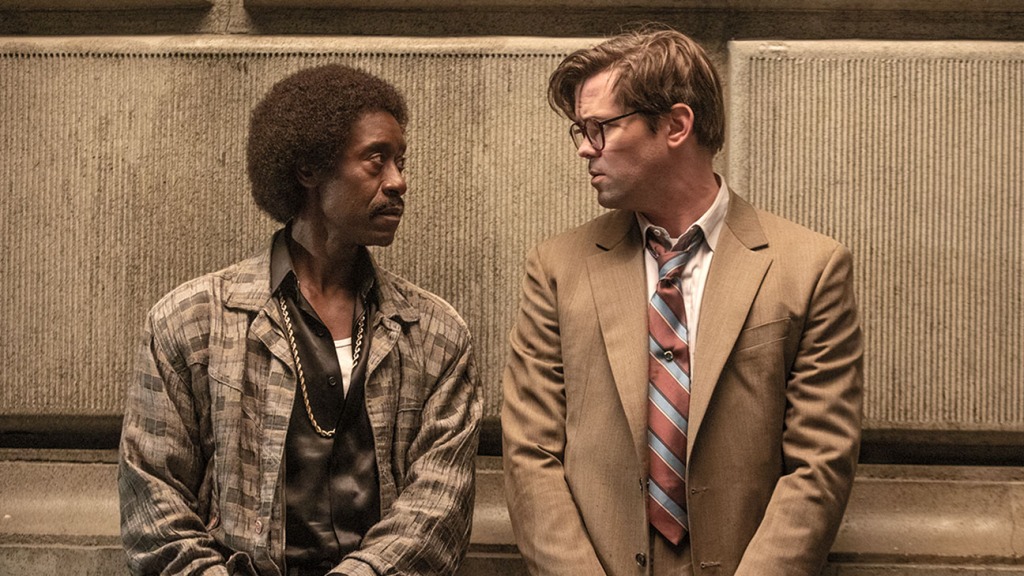 Cheadle had previously spent five seasons on Showtime’s House of Lies, portraying an outlandish management consultant. He was connected to the team by Nevins. “It always depends on the material,” he says of re-teaming with the cable channel. “What it’s going to be and how it’s going to be put together? Who is involved? Once all of the pieces were together, there was no ‘no.’”

Though there are some basic similarities between House of Lies’ Marty and Black Monday’s Mo, “If it was the same thing [I’d have paused],” Cheadle said. “But this show is so much more extreme. Maurice is so much more insane than Marty was. The period, the music, the clothes — it’s really a different thing we’re diving into. As well as the story arc: It’s as much of a mystery and a whodunnit as a comedy. That’s interesting to me to see how it’s going to play out. That was exciting and fresh.”