On March 24, Kim Janey was sworn in as Boston’s 55th mayor. It was a history-making move, with Janey becoming the first Black person to hold that position in the city. Only one cable news channel carried it live: The Black News Channel.

As a startup television news channel taking on entrenched competition, BNC faces steep challenges. But Hair and the channel’s talent believe that by focusing on communities that are underserved or not served at all by legacy players, there is a significant opportunity waiting to be unlocked.

“It is gratifying to be able to fill a void, to be able to step in and say we have been neglected,” says BNC anchor Marc Lamont Hill. “We have an incredible assignment as a network, and that is to tell these stories that legacy cable networks haven’t been committed to telling.”

Hill’s Black News Tonight will kick off BNC’s biggest move yet: rolling out a new primetime lineup. “Our focus is going to be on fusing the proper amount of context and perspective and depth, to add texture to the news of the day,” Hair says, noting that the initial launch slate last year was more focused on a headline-driven news of the day format.

“I have been on television for the last 12 years in some sort of commentating capacity for MSNBC, Fox and CNN. Always in the capacity of being an oppositional force, juxtaposed with someone with very different opinions than my own, often in the position of having a discussion or debate or whatever you want to call it with someone who devalued Black lives,” Blow says. “That is not only a tiring experience, I think it narrows both my perspective and ability so that I become ‘the oppositional race guy.’ … What we want to do is to have a show that truly centers Blackness.”

Hair says Blow’s show will bring “historical context and perspective” to the lineup, while Hill says his 8 p.m. program “will run the gamut from politics to pop culture.”

“We won’t just cover the top headlines, though we will do that, we will also pursue stories that are off the beaten path,” Hill adds. “We will put a spotlight on stories that Black people are talking about on Twitter, or in barbershops, that may not get covered by mainstream cable news outlets.”

Tewolde, meanwhile, will bring her background as a prosecutor and defense attorney to 9 p.m. “Making the Case came up because I am so used to an adversarial environment [as an attorney],” Tewolde says. “We always had to make a case, I want to bring that to television, bring people’s perspective, and have them make their case for anything that we talk about.”

BNC launched a year ago with 55 employees and availability in 2 million pay TV homes, and has grown to 150 employees in 52 million homes. The channel was cofounded by former congressman J.C. Watts, who remains the company’s chairman. Shad Khan, the billionaire owner of the Jacksonville Jaguars NFL franchise, backed BNC from its launch and is the majority owner.

While Hair says that the channel has a “robust” direct ad sales business, it is actively courting more national brands for sponsorships. BNC signed a deal with CBS Media Ventures in March that will see the ViacomCBS unit help drive business with major national marketers. BNC will also be rated by Nielsen starting in April.

While BNC launched last year, the new lineup is a fresh start, a reboot of sorts. “I actually said to a friend: ‘I must be the queen of reboots,’” Tewolde says, noting her work on the revived Court TV from Scripps and Fox’s America’s Most Wanted. “What makes BNC different is that there was a long history and a brand with [Court TV and America’s Most Wanted] that people were familiar with, so it was almost as if people were trying to revive what it used to feel like. This is something that is new, uncharted territory.”

“I am just very excited that we get to create a space for Black news, that doesn’t have the architecture of the larger culture around it,” Blow adds. “Rather, what would you present to a Black audience if nothing else existed?” 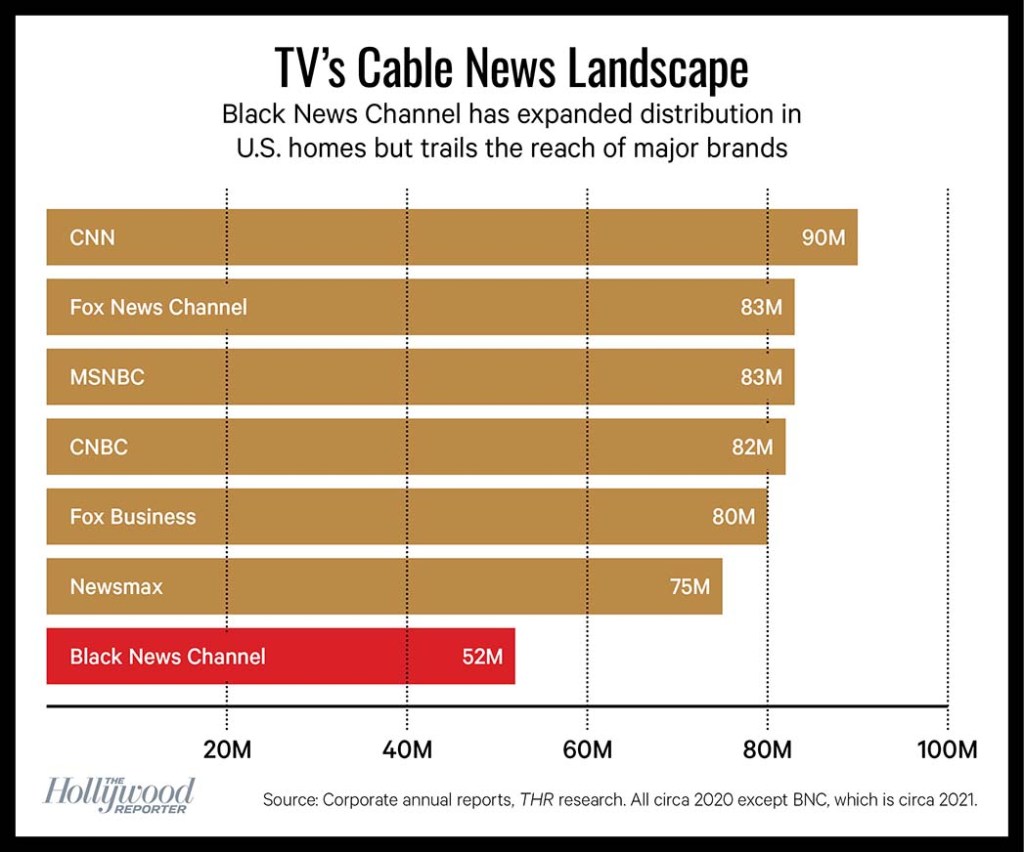 A version of this story appeared in the March 31 issue of The Hollywood Reporter magazine. Click here to subscribe.