Bob Newhart’s second beloved hit sitcom Newhart is best remembered for delivering one of the most creative and memorable series finales of all time. But at a packed tribute panel Thursday night at the Paley Center for Media in Beverly Hills, the 88-year-old comedian and his former co-stars reminded attendees that beyond that landmark exit there were eight full seasons of laughter and fond memories to celebrate.

Before the panel, Newhart — still possessed of crack comic timing cloaked in endearing stammers and pauses — told The Hollywood Reporter that after the wildly popular and critically praised six-season run of his first CBS sitcom The Bob Newhart Show ended in 1978, he knew he’d eventually return to the network with a new series — and, in a move that would have presaged current revival trends, he briefly considered rebooting the original.

“I knew I was coming back to television because I loved it — I loved television, the immediacy of the audience,” said Newhart, who toyed with reviving psychiatrist Bob Hartley. “We had considered maybe picking up the show five years later or something like that. Then we decided to not go that direction, because we’d used six years of material! Suzanne Pleshette also wanted to do a Broadway show.”

Instead, Newhart, who was performing in New York, found inspiration in the lobby of the hotel he was staying. “I realized how similar a hotel was to what The Bob Newhart Show had been,” he recalled. “The patients were the guests at the hotel, and no matter how crazy they were, you had to do what they wanted you to do, and you go along.” He pitched the idea to CBS, who teamed him with former Taxi writer Barry Kemp.

The two conceived a second eponymously titled series, casting Newhart as successful DYI author Dick Loudon, the new owner of a quaint Vermont bed-and-breakfast who along with his supporting wife Joanna (Mary Frann) found himself frequently flummoxed by his guests, quirky staffers like handyman George Utley (Tom Poston) and a slew of eccentric local townspeople.

While the show premiered in 1982 to high ratings, Newhart admits the series didn’t fully click comedically until the end of its second season, being afforded a rare — back then and even more so now — opportunity to experiment and refine its approach. That entailed eliminating characters that didn’t work, like pathological liar Kirk DeVane (Steven Kampmann) whose dishonesty made the studio audience hesitate to laugh. In his place, the series made a number of comic discoveries who became regulars along the way, including Julia Duffy as spoiled heiress-turned-hotel maid Stephanie Vanderkellan and, later, Peter Scolari as her alliterative yuppie beau Michael Harris, who produced Dick’s local cable series. 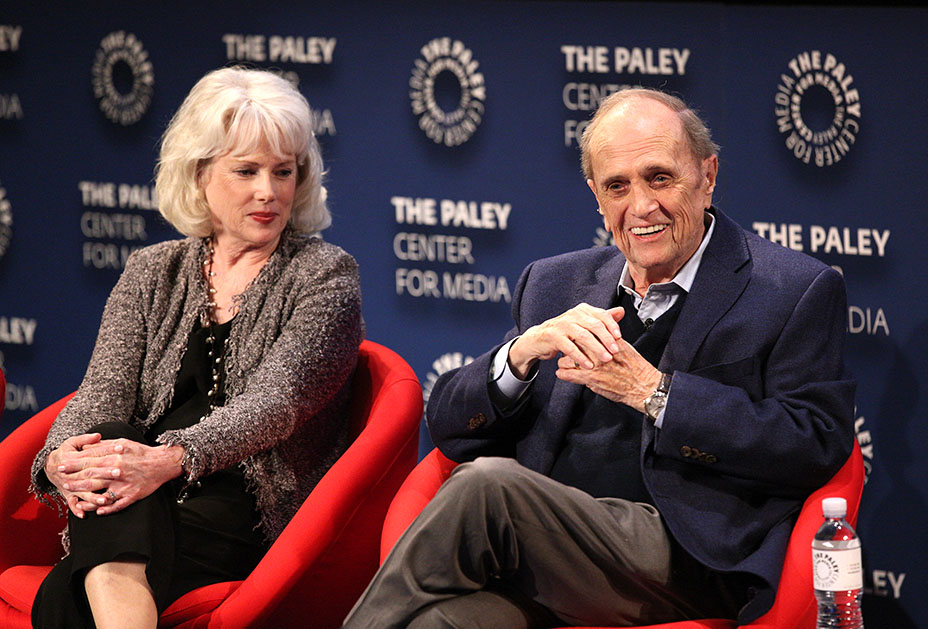 “We were finding ourselves,” Newhart recalled. “We introduced Julia, and that was a gift — she’s so talented. She and Peter, and their vapid life, their relationship — so I think like, in middle of the second year, we were off and running.”

Duffy told THR that while her first season guest stint as Stephanie wasn’t as hilariously vain and shallow, she still knew she was in for something special. “It wasn’t just another acting job because it was a huge deal for me that I got to work with Bob,” she remembered. “I’d always wanted to. In fact, I watched his old show, and I remember when it went off the air, and I thought to myself, I was always hoping I’d get to go up for that show for some guest role, and now, I’ll never get to work with Bob.”

Once she was freed from another quickly canceled series, Newhart invited her back permanently and the definitive Stephanie took form. “Any comedic idea you came up with, you could do with Stephanie, because she had a ridiculous amount of confidence in herself,” said Duffy. “She could do all kinds of things, and her reaction to the ordinary world wasn’t like anybody else’s, because she found it all amazing and a little sad, compared to the world she’d come from. To me, it was like playing an alien, almost, and I thought that was so much fun.”

When Scolari’s second season guest role was also expanded to regular status, Duffy said she and the former Bosom Buddies star (who is currently filming on the East Coast but sent a loopy video of congratulations to the panel) found “instant” chemistry as the equally superficial paramours. “We rarely even discussed a scene — we just both heard it the same way, and didn’t have to discuss it. We’re very different people, but when it comes to comedy, we were like of the same cloth.”

But perhaps the biggest, most inadvertent and most enthusiastically received were a trio of characters first intended as one-off gags in the show’s second episode: the off-kilter backwoodsman Larry, his brother Darryl and his other brother Darryl, played by William Sanderson, Tony Papenfuss and John Voldstad, respectively, who would appear in around two-thirds of Newhart’s subsequent episodes, even though the Darryls never uttered a word until the series finale. The reaction of the studio audience to their first appearance was palpably uproarious.

“They came in and they were an immediate hit,” Newhart recalled during the panel. “As soon as the show was over, I went to the writers and I said, ‘We have to have these guys back!’ That’s one of the magical things about having an audience. They told us … because they got 10-15 seconds of applause every time they walked in. And every time they left, they got another 10-15 seconds.”

“We put all those people in the audience,” Sanderson quipped to THR, remembering that first entrance. “No, it was a shock, and I love Bob for insisting on a live audience. He says, ‘You get the feedback.'” He gives great credit to Papenfuss and Voldstad, classically trained actors who were patient about their lack of dialogue. “They seem minimalist, but they have great backgrounds, and they listen very well. I owe them an unpayable debt.”

“They were magical,” Newhart said of the trio. “I think Larry, Darryl and Darryl, and maybe a certain loyalty maybe the audience had toward me, bought us the two years until we were able to come up with Julia and Peter.”

Sanderson also still savors what has to be second most memorable moment in the Newhart finale, when the Darryls finally speak their only word of dialogue, shouting “Quiet!” at their chatterbox new wives. “I could feel the energy coming from both of them — they just exploded. The audience, luckily, laughed.”

The panel was attended by several familiar faces in Newhart’s inner circle, including his wife of 55 years, Ginny, and their children and grandchildren; Duffy’s husband and Dark Shadows actor Jerry Lacy (who also penned two Newhart episodes); Dolly Martin, the wife of the late comedian Dick Martin, who directed more than 30 episodes of the sitcom; Barbara Rickles, the wife of the late comic Don Rickles, Newhart’s closest friend; entertainer Steve Lawrence and iconic game show hosts Alex Trebek and Peter Marshall. And eventually, talk did turn to that legendary finale. 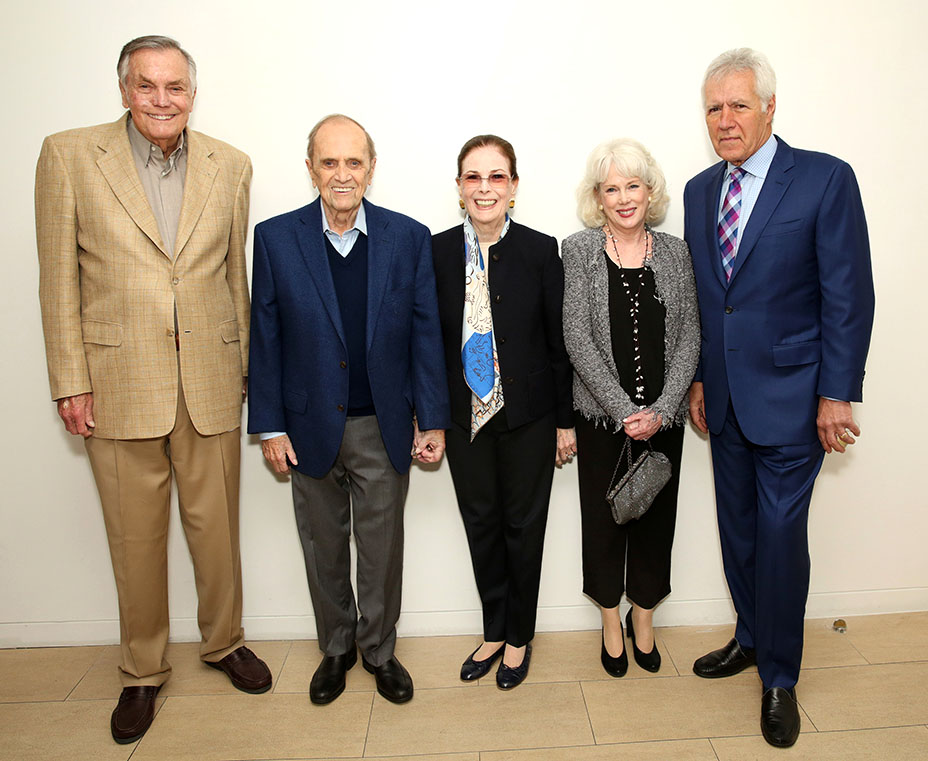 Newhart repeated his oft-stated “true story of how this show ended,”that it was his wife, while the couple was attending a party in Beverly Hills along with Pleshette, who first brainstormed the finale’s epically meta definitive moment: after a surreal setup in which all of the townspeople became wealthy and even more eccentric when the region surrounding the Stratford Inn was bought up by Japanese investors, much to Dick’s befuddlement — he wakes up in the familiar bedroom of The Bob Newhart Show next to Pleshette as Emily Hartley, revealing that the entire second series was just a bad dream had by his original TV character. (Newhart’s executive producers have publicly disputed Newhart’s version of events, claiming the inspiration as their own).

The biggest feat was keeping Pleshette’s appearance secret — from the studio audience, from the press, and even from many in the cast and crew. “Suzie was two soundstages over, brought in at the last minute. No one knows she was there,” recalled Newhart. When a floater panel was finally moved to reveal the bedroom set during filming, “the audience began to applaud — they were applauding the bedroom set! They didn’t know Suzie was in bed or I was in bed,” laughed Newhart. “To me, it was a Monty Python kind of moment, that we knew the audience, they knew us, and it was kind of a wink-wink nudge-nudge, and that’s the way they took it. You’d hear people, ‘Yeah! Yeah! Yeah! Yeah!‘”

While Newhart has no plans for a Newhart revival (citing both the passing of Frann and Poston, he also noted “That’s for much younger people”) or a full-time return to television (“That would be a death sentence — my wife would kill me!”), the actor is enjoying seeing his status in pop culture reflected via nods in modern series like Mad Men and The Marvelous Mrs. Maisel (he revealed that the latter series’ running gag of aspiring midcentury comics passing Newhart’s standup material off as their own similarly happened to him in real life).

And he expects that he’ll reprise his Emmy-winning role as Arthur “Professor Proton” Jeffries on CBS’ The Big Bang Theory and/or its prequel spinoff Young Sheldon at some point. “I usually do one a year, sometimes two. They write really funny stuff, and it’s a great cast to work with,” he says, still ready to put his indelible spin on a punchline. “I always say I still have my fastball — but it’s more like a change-up now than it is a fastball.”