The renewed frenzy around all things Breaking Bad in the wake of the release of the spinoff feature El Camino has spawned a new business venture — the virtual restaurant Los Pollos Hermanos.

Inspired by the restaurant chain owned by Gustavo “Gus” Fring, played by Giancarlo Esposito on both AMC’s Breaking Bad and the spinoff series Better Call Saul, Los Pollos Hermanos will offer menu items for delivery such as Pollos Tenders, Fring Fries and the ABQ Hot Chicken Sandwich. The latter is described as “a buttermilk battered fried chicken breast served on a buttered bun with dill pickle chips and a whole grain mustard spread. It comes with a dollop of “Slaw Goodman” on the side for the perfect bite.”

Delivery from Los Pollos Hermanos will be initially available in Los Angeles before a planned expansion to other metropolitan destinations like San Francisco, Oakland, San Diego, Las Vegas and Chicago. Under the deal, Uber Eats will offer one week of free delivery every month on all Los Pollos Hermanos orders for a six-month period under the partnership. There will not be a brick-and-mortar location.

“For the longest time, I’ve harbored the idea of a real-life Los Pollos Hermanos where Breaking Bad fans could savor Gustavo Fring’s chicken,” said Vince Gilligan, the show’s creator. “Little did I realize this could be accomplished without building an actual brick-and-mortar restaurant. Yay, technology! Smart phones actually are good for something!”

In West Hollywood, there is also a Breaking Bad-themed restaurant called The Breaking Bad Experience, featuring cocktails, kitchen staff in yellow hazmat suits, an RV and even a replica of Saul Goodman’s [Bob Odenkirk] desk.

Gilligan and his Better Call Saul team were able to taste-test the full menu ahead of its launch. “I loved this idea when I heard it, but I knew the devil was in the details — the food needed to be not just good, but great. I’m relieved to report that the folks at Family Style got it right: Their chicken sandwich is big and crispy on the outside, tender and juicy on the inside, and it rests on one of the better brioche buns I’ve come across. It doesn’t skimp on the spices, either,” praised Gilligan. “Don’t worry, it won’t set your mouth on fire … but it’s got a good kick to it. I think Gus would approve.”

It’s not the first time Los Pollos Hermanos has come to life offscreen. In 2017, a brick-and-mortar location popped up in both New York City and Sydney. 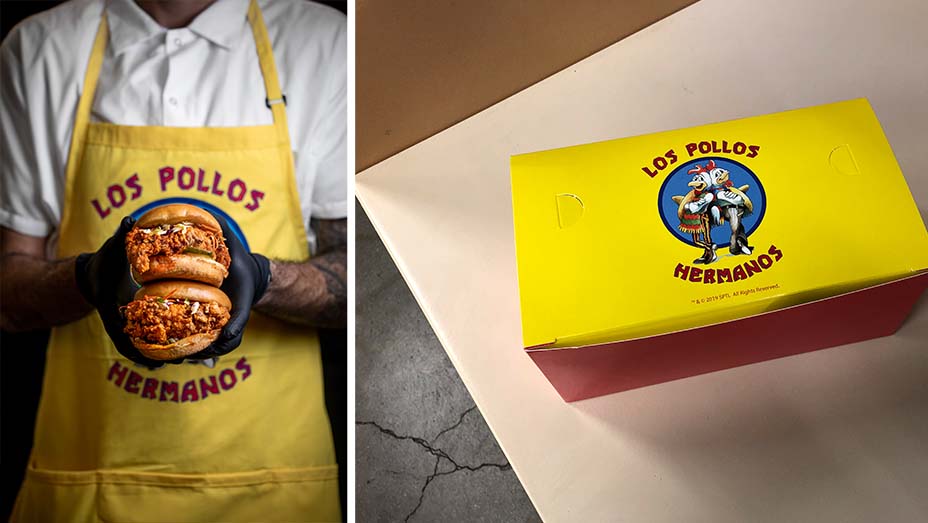