As more novels have flown from the shelves to the screen, books such as Bridgerton, The Queen’s Gambit and more have been given literary revivals.

Netflix announced Thursday that their recent adaptations of literary works, including Lupin and Firefly Lane, have achieved a rise in print sales with half of the top 10 titles featured on The New York Times bestsellers list for print and e-book fiction tied to a series on the streamer.

Following Bridgerton‘s December debut, author Julia Quinn’s The Duke and I, a historical romance that served as the basis for the first season of Netflix’s Shonda Rhimes’ hit series, has made its way to the top of the bestseller list, 21 years after its initial publication. The Duke and I held the top spot for four weeks, with five books from Quinn’s series also becoming quick bestsellers.

Netflix has described the romantic drama as its’ biggest original series ever, with 82 million member households having viewed the show, surpassing the prior record of 76 million views in 28 days for The Witcher. A second season has been confirmed and will be based on the second book in Quinn’s series of novels, The Viscount Who Loved Me, with Simone Ashley starring.

Meanwhile, thanks to the Anya Taylor-Joy starrer The Queen’s Gambit, Walter Tevis’s 1983 novel has also fared much success. Three weeks after the limited series’ October premiere, Tevis’s novel appeared on the New York Times bestsellers list for the first time since its original publication and remained in the top 10 for 11 weeks. The series received multiple Golden Globes nominations including a best actress in a limited series nom for Joy.

While the publication of the original works behind the recent adaptations occurred years prior, Maurice Leblanc’s Lupin marks the longest, with the original book having been published in 1907. Following the adaptation’s January premiere, Leblanc’s classic French story ranked in the top 5 bestsellers list on Amazon and Fnac ten days after the series, starring Omar Sy, premiered on the streamer, with the book’s 15-day sales equating to one year’s worth.

As film and television adaptations of popular novels have seemingly ignited a zest for reading, Netflix continues to have a lineup of adaptations releasing soon including A.J. Finn’s The Woman in the Window starring Amy Adams, Jojo Moyes’ The Last Letter From Your Lover starring Felicity Jones and Shailene Woodley, season three of both Caroline Kepnes’ YOU and Robyn Carr’s Virgin River, and Jennifer Mathieu’s Moxie on March 3, directed by Amy Poehler. 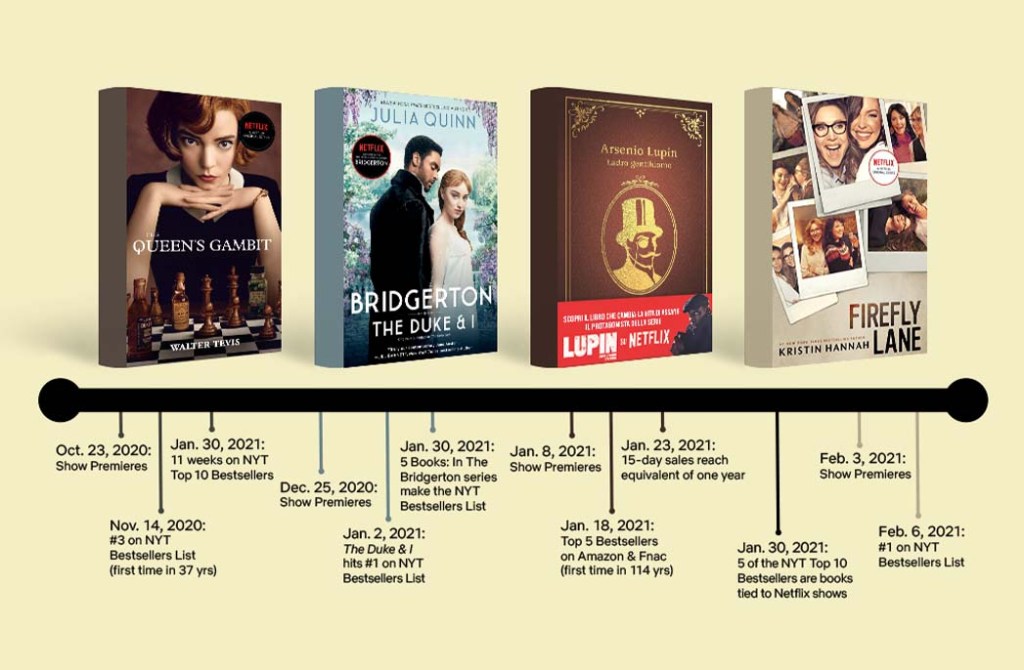 Netflix Says 'Bridgerton' Is Its Biggest Series Ever