The first episode of Broad City‘s final season followed Abbi Jacobson and Ilana Glazer’s characters, also named Abbi and Ilana, on a social media adventure. The fifth season premiere was a celebration of Abbi’s 30th birthday and, in honor of the milestone — one of many to come as the 10-episode season unravels — the duo decided to walk from the top of Manhattan to the bottom and document the entire journey as a real-time, emoji-filled story for their online followers.

“We were very excited but also nervous about the episode because it was a broad city big risk. But I’m so happy because I feel like it really paid off,” Jacobson told The Hollywood Reporter. Glazer added that, while every episode takes a significant amount of prep, re-creating a live social media story on the streets of New York City required more than their usual one-month allotment. “This was a different kind,” she said. “It was quicker in the sense that we covered more ground physically, literally and creatively, and I think there was a bigger concern in cutting it down to what it is now. You have to widen the net in many different ways to make this episode.”

In order to pull off their idea, the creators, writers and stars (who also direct two episodes a piece in the final season) enlisted Nick Paley to direct “Stories.” The opening episode came with a unique script and was filmed entirely on the iPhone (using six iPhone Xs that were constantly swapped in and out) over a four-and-a-half day shoot that saw the crew canvassing Manhattan, much like Abbi and Ilana do in the final product. They filmed in September and then entered into an edit that wasn’t completed until early December.

“It looked very different than our other scripts. There was more post work with lots of emojis and text where you could thread the story through other means besides just live-action footage, which was very different and freeing in a way,” said Jacobson. “Nick really threw himself into this episode.”

The innovative narrative approach of presenting the episode through a story on Ilana’s phone — and then on Abbi’s when Ilana’s phone doesn’t survive the journey — was a stylistic approach that excited Paley from the moment he read the script. And since they were not branding it as an Instagram story, Paley and the co-creators were able to create their own platform.

“It was a huge swing, I credit them with that,” Paley told THR. Paley’s own Instagram handle also gets a shoutout during the episode. “The concept is a crazy idea for a show that relies so much on the grammar of storytelling and have that be put to the test. The show takes such big swings, like last season with the animated episode, where Abbi and Ilana just have trust in their ability to make something great, no matter the stylistic challenge. They’re willing to take creative risks and they allow everyone around them to take creative risks, and that pays dividends in the final product. You see that in the show as a result of that type of leadership.” 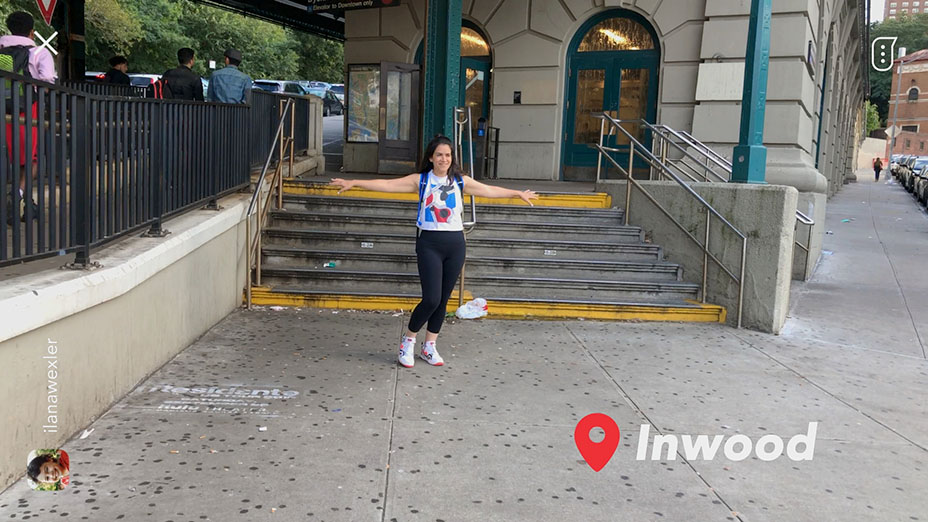 The final product sees Abbi and Ilana starting in Inwood and making a series of stops along the way — dining in Harlem, going down a manhole and inside a drug store, making a Sketcher’s stop, running around the Manhattan Mall with a child and meeting friends for brunch downtown — before arriving at the “tippity” bottom to take in a view of the Statue of Liberty. To prep, Paley went to Inwood and walked the entire path “basically as a scout, but also as a way to get my head around making that journey realistic,” he said. “New Yorkers really pay attention to the detail in the show and I wanted that to feel authentic when people are watching. They had built that into the script and had been really careful about the map.”

He continued, “We shot all over Manhattan on location. We would shoot a scene and walk to the next location or get in vans and move. There was so much ground to cover in those four days.”

The result when filming was a mix of painstakingly detailed material — including a man whose exposed butt crack gets covered by an enlarged peach emoji — and improv from Jacobson and Glazer as they filmed the b-roll footage on the streets. “That’s a hot topic, that butt shot,” said Paley, with a laugh. “That was scripted and he was hired to do that shot. The key was blending the moments. The bar for authenticity is so high, because everyone is so familiar with how we use phones to shoot when walking around casually.” 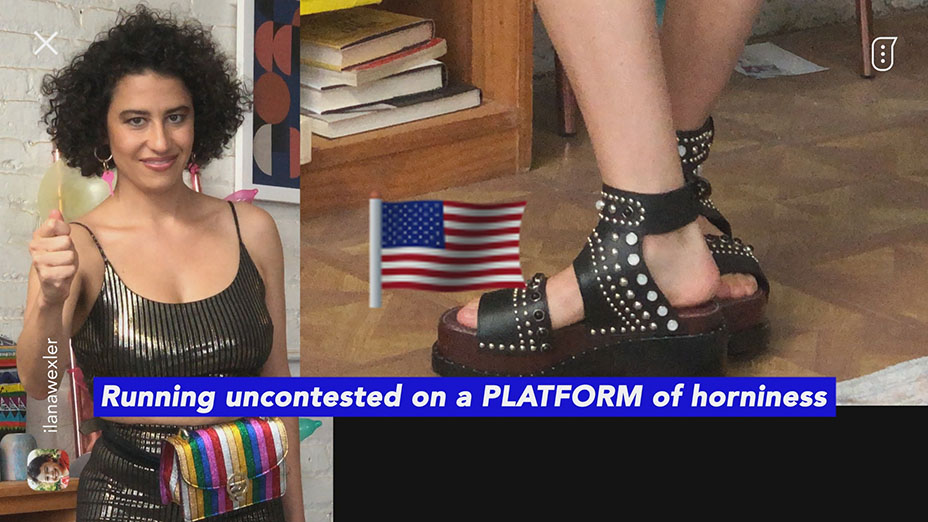 Paley said that while most of the Broad City episodes are scripted, this episode gave him an opportunity to use his stars as the “incredibly gifted improvisers” that they are. One scene that encapsulates that perfect mix was the showing in front of the Trump building on Wall Street, where Abbi and Ilana briefly — but passionately — use their bodies to flip off the site while screaming “Suck it!” and “Everybody’s laughing at you, clown!”

The Trump moment was only one line of action in the script that Paley was hoping would end up being a spontaneous shot.

“I wanted it to feel like a moment where they just happened to be passing by, got their reaction and then were on their way. When it got to the day, they just walked up in front of the building on the street and we were rolling. We hadn’t closed down the street; we had a few background people on set, but it was not a controlled crowd. I told them to do whatever they wanted and they got fully into it and, I think, expressed some legit emotion,” said Paley, who used a real story of Glazer’s for reference as they filmed. “For the crew, it was cathartic to see Abbi and Ilana getting to do that on behalf of them.”

When it came to the edit, Paley said the biggest challenge was utilizing the new language of social media stories to jump from scene to scene in ways that were emotional but funny at the same time. He also had to lean on close-up shots for the selfie footage, when comedy is typically captured in a wide shot. One of the best examples of that was utilizing reaction shots of Ilana to silently question what Abbi was saying as she embarks on a passionate monologue that lacks any self-awareness.

“Reaction shots are so built into comedy as the place where you actually laugh, and finding that little image of Ilana’s facial reaction just makes that joke really land. And at the end of the take, we land on Abbi propelling us to the next scene,” said Paley. “In the edit, I went into it asking, how do you make a joke land and how do you time it? Then I found adding the titles and visuals to be really liberating and a way to add jokes and story beats organically and move the story along. The expectation with social media stories is that time is jumping moment to moment, and that is a gift in terms of storytelling, because it lets you get to the most interesting part of a scene.”

He added, “I ended up loving it. I feel like it could be used a lot of different ways in storytelling in a way that I didn’t understand before we went through that process.” 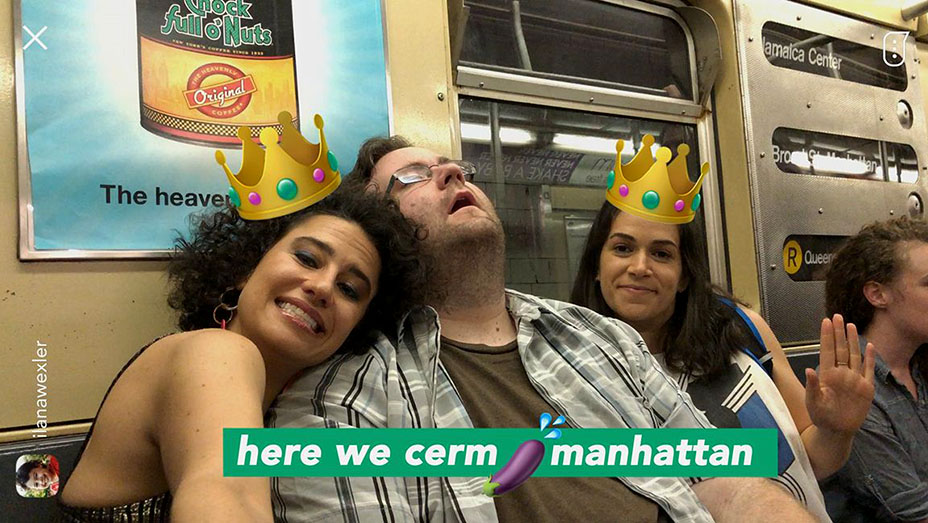 In the end, after both of their phones break, Abbi and Ilana come upon a series of rainbows and realize that they don’t have a way of filming it. At the end of the day, they realized that they didn’t even feel like the adventure was their own because they were so busy capturing it and sharing it instead of living in the moment. In reality, they captured so much footage that the first edit came in at 33 minutes. With the final episode clocking in at 22 minutes, Paley said much was left on the cutting room floor: “There’s a ton of material that was so, so funny. And a lot of scripted stuff that was so funny that was so hard to cut.”

The episode’s commentary on social media was the result of many discussions between the team about their relationships with their phones. And wrapping that takeaway within an engaging adventure is part of what makes Broad City so smart, said Paley.

“This is a fun story to watch and we’re engaged the whole time, and then at the end, they don’t remember anything because they’re filming the whole day,” summed up the director. “Abbi and Ilana have the taste and smarts to know that something as simple as a negative statement about how we interact with our phones is too simple. It’s a complicated thing. That’s why the script was so strong and why I think people will really connect with the episode.”

The final season of Broad City airs Thursdays at 10 p.m. on Comedy Central. Watch the full season trailer, below.