[This post contains spoilers from the Jan. 31 episode of  NBC’s Brooklyn Nine-Nine.]

Chelsea Peretti’s Gina made her Brooklyn Nine-Nine exit during Thursday’s “Four Movements” episode but, to hear the actress tell it, she won’t be gone for long.

Although Peretti is departing the Fox-turned-NBC comedy as a series regular, the timing of her final episode timed up with the actress returning to the show’s Los Angeles set to film Gina’s (as of now) one-off return.

Below, Peretti talks with The Hollywood Reporter about saying goodbye to the cop comedy from exec producers Dan Goor and Mike Schur comedy series, her influence on Gina’s farewell installment — which included the character’s perfectly themed separate goodbyes with her precinct friends — and what comes next.

What made now the right time to leave?

Well, it wasn’t just a solo process. [Laughs.] I wasn’t just like, “I’m leaving!” and I swing my cape. I can’t get into the exact breakdown of how it all transpired, but it wasn’t just my solo decision. I’m friends with Dan, I’m friends with Andy [Samberg], I’ve talked with them about the situation over the years. I think it came together this was the time to do it. It’s not always easy to make changes in life, but I feel like everyone came to a point where everyone was like, “OK, this is the time.” That’s the gist of it.

To clarify, were they looking to also potentially write you out and it came together? Or was this something you came to them with?
[Laughs.] That’s the part that I’m deliberately not clarifying, because I feel like I can’t get into the exact breakdown [of what happened]. I’m just a lowly actor out here without much status. Everyone’s like, “Hey, do a bunch of interviews.” And I’m like, “All right. I don’t know how to talk about it.” But I feel like it’s one of those things … you write about Hollywood all the time. No one can ever fully say the whole story of what’s going on. But the gist is it was somewhat mutual. And it was amicable. That’s the best way I can put it.

How did you tell the rest of the cast?

It was emotional. I talked about it with people in a staggered way. I think it was surprising, and we shed some tears. And then, of course, the week of shooting that last episode, I think like many actors do, you shut off your emotions around it until the very end. Before they said cut on the final scene, there was a weird lag, and I was like, “Oh my gosh, is it happening?” They were assembling people together. It was a Friday night, and normally if it’s your last scene, people are like boom, everyone is gone. It was this weird, “Wait a minute, something is happening?” And then Dan and me made teary speeches to everyone. There was cake. It was a process. It’s still a process, because I felt it all then, and now it’s all airing. So now all the fans are writing to me; I’m feeling all these feelings again. It’s one of these show business things where you have a delay on people responding to [what happened]. So I’m walking through those feelings again. It’s been really moving for me to not only see the fans who became so outspoken when they wanted the show to continue, but are being so heartfelt with me about the character.You really do work in somewhat of a bubble You don’t know how you’re impacting people. I’ve always been surprised by how many teenaged and college-aged women are saying this character inspires confidence in them. That is cool to me.

Was the goodbye celebration show-themed?

[The cake said], “You just drank cement.” The funny thing is no one had any! It was Friday and everyone is generally trying to get out of there. So I wound up having this entire cake at my house. Dan very nicely gave me flowers and framed photos and stills from the show. I’m going to post all of this stuff on Instagram on Thursday. It was a lot of tears. 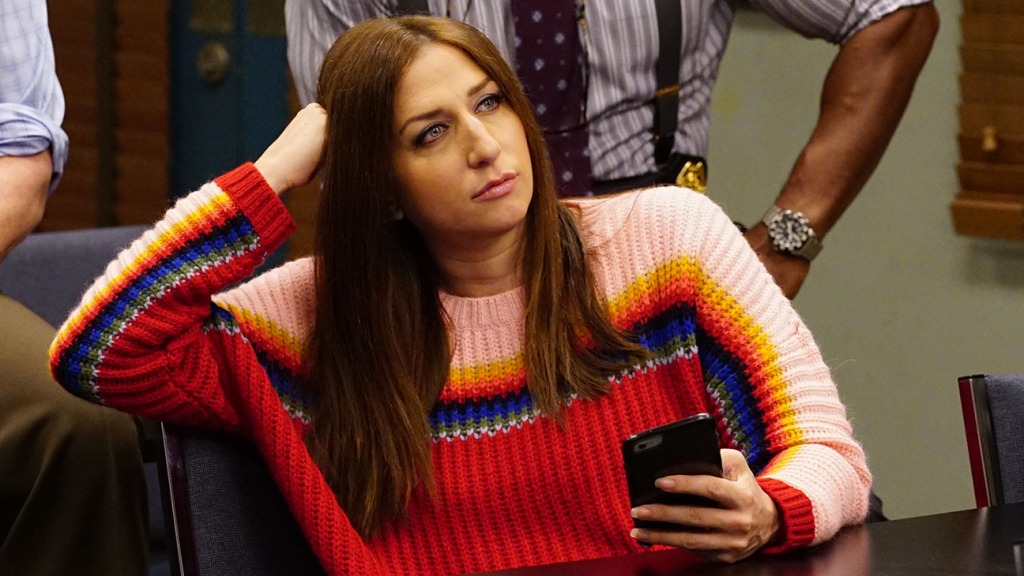 What input did you have in Gina’s exit storyline and the final episode that centered on her core relationships?

I had a lot of input. Me and Dan spent a lot of time on the phone cackling about a variety of different ideas. Not all of them made it in. [Laughs.] But we did have a lot of fun. The thing with Holt, I was saying, “What if we had a secret friendship that was way deeper than people realized?” You already get the sense they have an authority figure and disciple relationship. But what if they closed the blinds in his office and they were reading magazines and facials and talking about people with total candor. That turned into us playing this very serious chess game. That’s what was funny. And chess? I don’t know how to play chess. There was a chess expert advising me throughout the scene. And I had to step away and start crying. Andre [Braugher] is such a serious actor, he was like, “I need to know the proper chess game that is happening.” And I had so many lines, I don’t know how to play chess, and I was like, “This is out of my wheelhouse!” So I had to go step outside and cry in a storage room! The Andy [Samberg] thing, I always wanted [Jake] and Gina to be in a high stakes comedy situation. To me, when the stakes are high, the comedy hits so much harder. Frequently, she’s marooned at her desk. Because she’s a civilian, she’s not able to get up on her feet and do things. She has to be reacting to people or guiding them to action. It’s nice to actually be the first person in action in that episode. And [we also] explore[d] the friendships with Rosa and Amy, which I always wanted to do. I wanted her and Rosa to have an affair, but I guess that’s not happening. But at the very least, I thought her and Rosa would make the most amazing superpowers if they joined forces. People are so scared of them, and they’re so smart and so powerful. I wanted them to take over the office.

All of that is to say, it was cool to explore those friendships more with Jake, Amy, and Rosa. I feel like frequently, a lot of the characters on the show can pair off: Amy and Rosa, Jake and Charles, Terry and Holt, Hitchcock and Scully. And then it’s Gina. I’m sometimes like, “Wait! Everyone’s got a partner on the dance floor.” It was nice to get to feel the deepening of this childhood friendship with Jake and to see that play out in a comedic way. And to get to see the heartfelt connection with the women on the show. And stuff like that. Not to say that women have to be heartfelt and funny; I feel like our characters have a lot of comedy tropes that are available to them.

It’s understandable you had to be detached from the episode as you were filming it, but looking back, was there something about filming it that really stands out?

The one that just aired, I definitely loved the tenderness between Jake and Gina. I wasn’t sure how I would feel watching it. I was definitely moved to see them being genuine with each other. And then at the end, we’re both laughing. It’s such a nice combination. The line between me and Andy [and our childhood friendship], and Gina and Jake is really blurred there.

And then in terms of this episode, the chess game, I was crying in a storage closet. I’m just going to be relieved if it plays well. I just love working with Andre. He’s such a good actor and he has such good comedy instincts, because he makes unexpected choices. I’ve always loved Holt and Gina’s scenes because he’s such a character and makes me laugh. But I also did love dancing. It’s just me trying to make my cast mates laugh. When I think about that moment, it’s so sweet, because what I loved about that show is spending time, all of us together. This is actually making me cry now! [Takes a moment.] Everyone in that break room, so many years of scenes in there, and then doing the stupidest dancing imaginable and talking to my foot. [I was] just looking out and hoping people would be laughing. Doing insane things. That’s a lot of what I did on the show. It was a fitting end. I know a lot of fans would have been disappointed if there wasn’t a dance element in Gina’s grand exit. I saw some of the episode because I did ADR, and I was talking about how the [Gina] statue [she left for the squad] doesn’t look like me. I had to do a full hour-long photoshoot of 360-degree photos. And then I saw it, and it doesn’t look like me at all! So I ad-libbed, and I wrote down some things I wanted to say about the statue, and when I did the ADR, that’s when I found out it made it in. And it was crazy, I had to acknowledge it. [Laughs.] Of course, we also had like a million photos of the cast with the statue.

Gina also got to dismiss Mario Lopez from her goodbye party. What was the genesis of that joke?

I mean, Mario Lopez really came out of left field. But they’re kids of the ’90s, and he was a cultural touchstone. He’s like the guy with the eyeliner on Lost — he doesn’t age. When I saw his name on the script, I was like, perfect. We would be so geeked for Mario Lopez.

You’re back filming an episode of the show right now. Outside of that, how much can fans expect to see you back?

At least [the] one episode. The story for Gina is pretty funny. In terms of other episodes, contractually, I don’t think there’s anything else required of anyone. So I don’t know if it’ll happen or not. It depends on what happens in the writers’ room.

What will you miss the most about playing Gina?

I’m going to miss the fun of getting a script and reading the lines at a table read for the first time. Gina is always a funny accent to these table reads. But one of the things was the camaraderie that developed between the cast. And the inside jokes we have when we want a scene to end. There are so many funny inside jokes we’ve built up over the years. The good news is we have a text chain where we’re always texting back and forth. They didn’t cut me out of that yet, but we’ll see. [I’ll miss] seeing what Gina would do next, and what her potential is. And hanging out with the cast.

What are you looking to do next?

I am running for President of the United States of America. Or a senator. Or I’d like to just keep doing great comedies till I die.

This interview has been condensed and edited for clarity.??