Call it a TV miracle.

Within the span of 30-some hours, Andy Samberg’s Brooklyn Nine-Nine went from canceled at Fox to renewed for sixth season at NBC.

Within that time span, Brooklyn Nine-Nine showrunner Dan Goor never lost faith and remained in communication with the show’s studio — NBC counterpart Universal Television, which owns the cop comedy. Instead, Goor kept hope alive and read thousands upon thousands of tweets — many from a who’s who of celebrities who shared their love of the series.

And speaking of love, Sunday’s season five finale ended with Jake (Samberg) and Amy (Melissa Fumero) officially getting married, thanks in large part to the teamwork of everyone at the Nine-Nine. So while the last episode to air on Fox ended with a wedding, NBC’s eleventh-hour miracle has opened the door for the show’s creative honeymoon.

Below, Goor talks with The Hollywood Reporter about the wave of emotions that followed Fox’s cancellation, the outpouring of support, how the NBC deal came together and what’s next for Brooklyn at a new network (hint: profanity!).

What have the past few weeks been like for you?

It’s been an amazing emotional roller-coaster but ultimately such a joyful, wonderful experience. To see the support of the fans was so wonderful; to be reborn felt so good. It really has been a magical week.

Everyone under the sun tweeted their support for the show and disappointment at Fox’s cancellation — Lin-Manuel Miranda, Guillermo del Toro, Mark Hamill… What was your response to seeing that?

I was blown away. I was so gratified by them but also by just the outpouring of support from all sorts of fans, from so many of our viewers and then from people for whom the show meant something, either because of Rosa (Stephanie Beatriz) coming out as bisexual and that helped them or because it gave them some comfort when they were sad. I feel like I read every tweet and all of it was meaningful and moving. The celebrity tweets were so cool and it felt great that they rallied and were so invested. I was blown away by that.

You have your guest star roster half done for next season, right?

(Laughing] That’s hilarious. There are a lot of people who also have pitched Lin as Amy’s brother, which is also really funny. It could be funny to see him as an archvillain because you always see him as such a good guy. He has such a nice persona that it would be funny to see that. We would love that but they’re all super successful so it’s very hard to make it happen. But we will try.

Walk us through the process of how Brooklyn went from canceled at Fox to renewed at NBC in a span of 30-some hours.

I was hopeful that we would be picked up so it was a hard to get the Fox cancellation call. I love all the writers, the cast and crew and I love telling these stories and making this show. But pretty quickly we were hopeful that there would be a second life somewhere else but you never know so I didn’t want to say anything or feel too confident in that. It was a weird twilight place to exist in. Then on Friday [May 11], shortly before 9 p.m. [PT], I heard [the NBC pickup] probably wouldn’t happen because it was late. Then all the sudden we heard that NBC was a go. And I was ecstatic. I mean I was through the moon. I was just so happy that we got to keep making this show and to be on such a wonderful network.

I contacted the cast and told them what was happening and everybody was blown away. Most of the cast had no idea and didn’t know that there were things being talked about. They felt the lows and the highs even more because they didn’t know there was a chance. The world’s reaction [to the news] was amazing.

It was obviously hard to hear that the show was being canceled by Fox and then the outpouring of support was so heartening. Somebody said it’s like in Tom Sawyer when he goes to his own funeral. You don’t usually get to experience that and it was an amazing experience.

Who called you to tell you that the show was being picked up — and what did that call sound like?

I got a text from the studio or from [3 Arts’] David Miner [who exec produces], who had heard from the studio [Universal TV] and then we quickly all got on the phone together with [Universal TV president] Pearlena Igbokwe and the studio. Pearlena was so great, as was [NBC comedy head-turned-co-president] Tracey Pakosta was great and Bob Greenblatt. It’s not easy to move a show from one network to another. It takes a lot of willpower — and to do it so quickly? All of those people deserve so much credit. I am eternally grateful to all three of them; they are the true heroes of this whole thing.

What were your conversations with Bob and everyone at NBC like in terms of what comes next? Did you have to pitch them the next season?

We did not have to pitch it. Most of the talks were with the studio. The nitty-gritty was all the studio. I have subsequently seen Bob at the upfronts and it’s been such a warm embrace. They definitely know what they’re getting. It’s an exciting challenge to figure out what the first episode on a new network will be. We’ve been around for 112 episodes but at the same time, it’s a new home and there will probably be different eyeballs on it. All of the writers on the show love a challenge so it will be cool to figure that out.

As you talk try to figure out what that first episode on a new network is, have you thought about how Brooklyn changes, if it at all, on NBC?

NBC wants and likes the show and has been so supportive of the show as it exists. I would be surprised if the show changed in any fundamental way going over to NBC. This past season was one of, if not our strongest seasons so what everyone wants is more of the same. We had a mini cliffhanger at the end of season five. Do you start by picking up right there? Or maybe somebody hasn’t watched it since season two and we need to reintroduce more of the world? It’s not worth getting into the weeds, but that’s the level that I’m talking about. I’m not talking about all the sudden it’s a hang out comedy as opposed to a cop comedy or something like that.

Have you thought about things you can do on NBC that you couldn’t do on Fox? Will & Grace is set in New York… and NBC has a great comedy brand with Superstore and Mike Schur’s The Good Place and now Abby’s …

On NBC, you can pixilate and bleep and we are very excited for that. [Laughing.]

You’ve got 13 episodes for midseason. Are you approaching season six as the end of the show?

We went toward the end of season five thinking, “Realistically, if we’re a bubble show, it could be the end.” So when we wrote toward the finale we had that feeling but we did not build season five as if it were going to be the last year. We really have not [thought about season six] because it’s super early and everyone just got home from the upfronts. This whole thing has been such a wild ride, I don’t even know what I would want, what Andy would want, what the network would want.

In terms of Sunday’s season finale, Jake and Amy are officially married — with a very typical Nine-Nine effort to get them there. How will they change now that they’re married and still working together?

Our approach will be what it has always been with them, which is to keep it small and real and not force conflicts that don’t exist between them. We are excited to explore what young married life means for them. What are the challenges of being married? Of combining your finances? Combining your in-laws and extended families? We’ll do stories about their relationship with them and we’ll do stories with them that aren’t about their relationship where their relationship is just background. One of the nice things about the build of their story has been that it’s never been the center of the show. 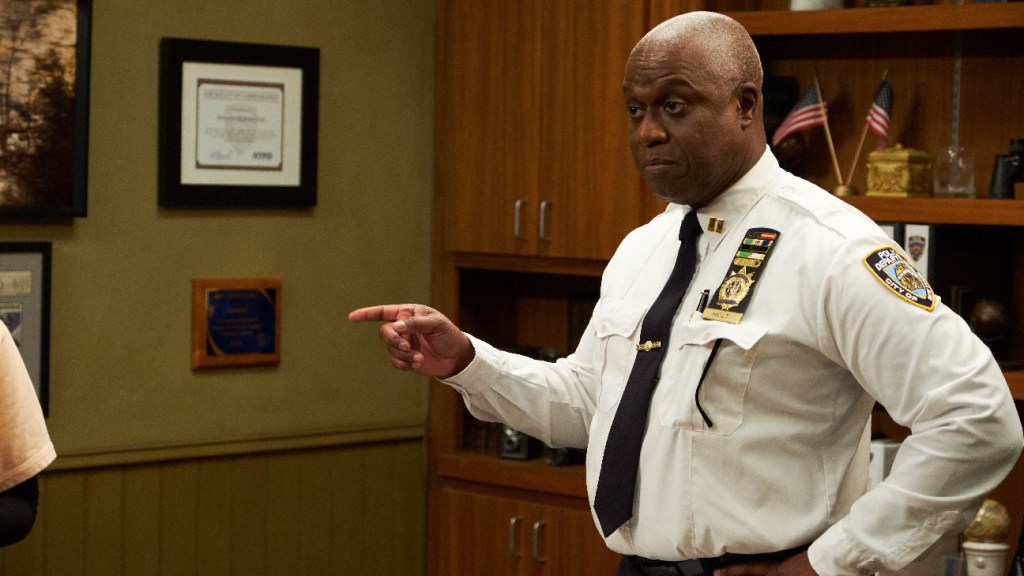 The season ends on a cliffhanger where nobody knows if Holt (Andre Braugher) got the commissioner job. What would you have done if NBC didn’t revive the show and it ended on that cliffhanger? Several canceled or bubble shows ended with major cliffhangers this season, including Lucifer and Timeless…

The season four finale we wrote with a giant cliffhanger and I was very worried that if we didn’t come back it would be a much more cynical outlook on the world than Brooklyn normally has because it would have been Rosa falsely sent to prison. That’s why we did the finale we did this year — and this was the thing we did on Parks and Recreation every year — where it felt like if this is the series finale, people will be satisfied and then there is this little cliffhanger. If it had been canceled and not saved, maybe we would have figured out a way to let people know what the email said.

Fox Cancellations Explained: Why So Many Shows Got the Ax

The dynamic between Gina Rodriguez’s taxi cab driver and Rosa was great. With Jane the Virgin also ending next season — airing, like you, in midseason. Given the scheduling, is it possible to have her back?

It is definitely possible but we’re so early in everything it’s impossible to make any promises. We loved her and she was a joy to work with on set. Their chemistry was great and I would love to have more Gina Rodriguez on the show. 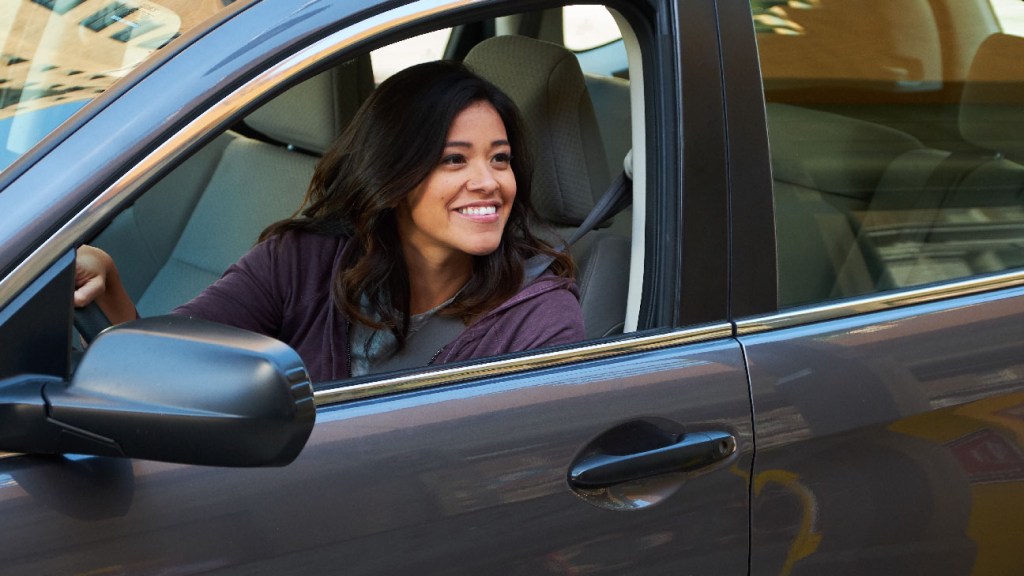 What did you think of the Brooklyn Nine-Nine series season finale? Share your thoughts in the comments section, below.