To those currently binging on Black Mirror, Friday’s massive cyber attack occurring on the same day that the Netflix anthology series released its third season was a noted coincidence.

In fact, amid the massive blackout that affected many popular websites including Netflix and Twitter, the Black Mirror account had a little fun with the show’s ability to predict the future on its own social media, posting: “Twitter is no longer available to users below a 5 star rating. We apologize for the inconvenience.”

The tweet was a reference to the first of six new episodes, “Nosedive,”  in the Charlie Brooker-created series, which stars Bryce Dallas Howard in a near-future society where everyone is rated on a scale of 1 to 5. Dallas Howard plays Lacie Pound, a “4.2” who is obsessed with earning a higher number from her peers and who, ultimately, spirals herself into an exiled oblivion. The rest of the stand-alone episodes of the Twilight Zone-inspired British import explore other speculative perils of technology in society, including cyber hacking and mass tech-terrorism.

“These stories that Charlie and Annabel [Jones, executive producer] have cooked up are really only one click away,” Dallas Howard tells The Hollywood Reporter while appreciating the show’s “on brand” tweet. [The U.S. government is still trying to figure out the culprit behind the attack, as President Barack Obama admitted on Monday’s Jimmel Kimmel Live that they “don’t have any idea” who was responsible.] “I didn’t know that this type of cyber attack, to that scale, would be possible. So it’s like, ‘Oh, those things happen!’ With Black Mirror, it presents this version of reality that is so close to our own. Where it sees new technologies in these new sort of paradigms of thought that we’re already leaning into, and yet just taken a step too far, we lose our own humanity.”

Though the 35-year-old actress (and director Ron Howard’s daughter) has grown up in the public eye, the Jurassic World star only joined social media one month before shooting her takedown episode — which was written by Rashida Jones and her Parks and Recreation creator Michael Shur and directed by filmmaker Joe Wright (Atonement, Pride and Prejudice). Here, the actress talks about Black Mirror’s eye-opening view on the platform and how her character’s imagined reality is already happening today.

'Black Mirror' Creator on How He (Unknowingly) Predicted the Rise of Donald Trump, Season 3

“Nosedive” is a stacked collaboration that, cinematically, felt like a mini-movie. How was filming this episode a different TV experience?

Joe called me in December and just asked me if I’d like to do it and I said yes on the spot, before there was a script or anything. Then when the script came in and it was as strong as it was, it was so exciting. When we shot it, none of the writers — Michael, Rashida or Charlie — were actually on set because when I received the script it was done. At that point it was very fixed in a way that was stabilizing and I think very uncomfortable for TV, which is why it felt like a movie. What the whole algorithm of Netflix seems to be about is that the cream sort of rises to the top. They care most about quality and that’s really what their main focus was.

As someone who uses social media and lives in the public eye, where you can be liked and unliked without your control, what attracted you most to Lacie and the episode?

There were a couple things that really stood out to me. I heard about this for the first time in December and I had joined social media for the first time in my life in November, at Thanksgiving. So I was then a 34-year-old woman who had never been on Facebook, MySpace or any those antiquated systems of the past — and I say that with total respect! But it was something that was so new to my life. And it still does, always, feel awkward and inorganic. I remember trying to come up with what my line was going to be, how you have to describe yourself, and that just sent me into a spiral. I was like, “Well, who am I?” I ended up with “Born to belly laugh” because that is the one constant in my life. But it was really hard! The way that I was raised was to not be very conscious of yourself. I think because my parents were mindful of the fact that there might be a little bit more attention growing up and pressure or focus, that they went the opposite way with us. Myself and my siblings, we’re not self-conscious people. So having to be careful or thoughtful about what I’m putting out there and what I look like when taking a photograph? Having that kind of awareness takes some effort. 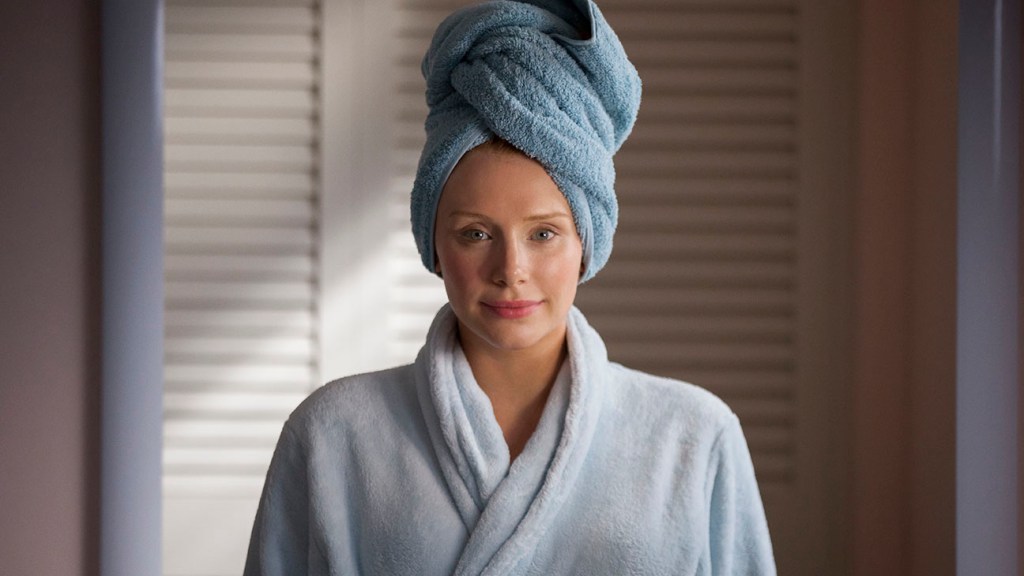 Watching Lacie practice that laugh in front of the mirror was so representative of how hard she tried to maintain her “app” persona. How did you come up with the laugh?

Just like this world of “Nosedive” and Black Mirror is one click away from reality, the Lacie laugh is probably one click away from my real laugh — which I hate to admit! I have a really loud laugh. My mom has this laugh and I would always be really cruel to her about it when she would come and watch my school play. I would tell her, “I always know where you are in the audience and it’s really distracting.” And then, of course, I inherited it. Early on when Joe and I were talking about what kind of signifiers we can have for Lacie getting nervous or trying to gain peoples’ approvals, smiling and laughing is such a common way that we mask what we’re really feeling. So, in the same way that everything is slightly heightened, we thought that would be fun to do. I kept getting really paranoid that I’m now going to shift into this being my authentic, genuine laugh and always seem like a wicked villain.

There are things that Lacie does, like posting a photo of her latte, that people do on social media all the time. Even though the story takes a very dark turn, it doesn’t feel that far from reality. How close do you think we are to “Nosedive”?

It could absolutely happen, it is happening already with Uber and Airbnb and Yelp. These tools, oftentimes, they serve us until we become a slave to it. That doesn’t mean forgo it completely, but it’s ultimately about that impossible balance we’re all striving for. What really signifies to me how close this all is, is that I wish there were more rules as to how to win. We’re figuring out social media and what it means and what it is supposed to represent, if there’s value to it or not. There’s a lot of speculation as to what this all does mean, and not just monetarily, but culturally and in terms of relationships with one another and how we communicate. I wish someone could tell me, “Oh, people like to read things like this and that.” It’s this thing that’s challenging you to be authentic because there aren’t quite rules yet, and you can’t trick people or trick yourself. You can’t not pay attention to it because, still, the only rule is to be yourself and that’s one of the hardest things a person can ask another person to be.

How did it change your own social media behavior?

This interesting thing that is really present in the story is where I try to have some awareness as to my relationship with social media and then proceed from there. But you slip in and out of that awareness. With Lacie, in the scene with Cherry Jones where she basically hands me the keys to the kingdom, saying, “The ratings system does not matter and f— it, just really f— it.” Lacie says: “It’s how the world works. I can’t just kick off my shoes and roam the earth, I have to play the game.” And that’s what’s tricky. Participating in social media actually isn’t being imposed upon us and yet, it feels like it is, because so quickly the relevant voices are the most prominent on those channels. How do we have it not control us or have an inappropriate amount of attention in our lives? Yet, we also have to acknowledge this is playing a large role and that we can’t just ignore it. We can’t totally walk away from it and yet you have to be so cautious in how you engage with that kind of power, which is the power to broadcast anything you want at any moment to absolutely everyone.

In the end, Lacie hits rock bottom after her maid-of-honor meltdown and ends up in jail. But she finally bucks the rules and says, “F— it all.” How do you view the takeaway message?

I think it’s a cathartic ending. There’s some subtleties within the beats of it. For instance, she gets her contacts taken out and she can see the particles and little pieces of fluff in the air that exist around us for the first time. It’s like she’s present for the first time and in that, she’s able to actually be this person with this other person in this very dire situation that is somehow healing for her. Sometimes, the worst thing needs to happen because what’s scarier than the worst thing is being scared of the worst thing. For Lacie, the scariest thing in the world was not being socially accepted and here she is, in prison. She couldn’t feel anymore rejection than society saying, “We want to imprison you.” And then she’s freed by that. She’s naked, she’s not insecure about her body or ashamed of how she looks or comes off and obviously she’s incredibly crude with this beautiful gentleman and she’s just fearless and free.