Continue to The Hollywood Reporter SKIP AD
You will be redirected back to your article in seconds
Skip to main content
November 13, 2019 10:54am
Logo text

When Jimmy Fallon debuted on NBC’s The Tonight Show in 2014, he was watched by more than 11 million viewers. Today his live viewing audience is less than 2 million a night and he’s in the third year of a ratings tumble while CBS rival Late Show With Stephen Colbert builds an audience by mining Trump-era anxiety.

The instability at Tonight was exacerbated Nov. 4 when NBC revealed that Jim Bell would exit as executive producer after one year in the job. A 28-year veteran of NBC Sports and News, Bell left NBCUniversal entirely after producing Fallon’s show from the University of Austin on Nov. 7.

To many observers, the choice of Bell, with his news background, echoed that of Chris Licht, an experienced news producer at MSNBC and CBS News, who was tapped in 2016 to bring order to The Late Show.

There were signs that Bell attempted to inject Tonight with political urgency; he added a live show after the first Democratic debate in June. Meanwhile Sunday editions of The Tonight Show were an effort to capitalize on the large Sunday Night Football audience. But Fallon kept declining in a fragmented content universe where late night shows in particular are increasingly viewed via viral clips.

“As his producers got conscious of what other shows were doing, they tried to reshape him,” says Bill Carter, a former New York Times writer who has authored multiple books about late night. “The bottom line is, let Jimmy be Jimmy.”

Gavin Purcell, who launched Fallon’s show and has maintained a personal relationship with the host, is returning as an interim Tonight showrunner. The Los Angeles-based Purcell may become permanent showrunner, but for now, his family will remain in LA. His success in debuting many of the show’s viral segments — including “slow jam the news” — could help restore Fallon’s appeal.

Meanwhile, The Late Show with Stephen Colbert has drawn the biggest total audience in late night for three straight seasons with 3.44 million so far in the current period. Last season Colbert eked out CBS’ first victory since 1994-95 in the key ad-sales demo of adults 18-to-49. It holds a narrow lead — one hundredth of a ratings point — over The Tonight Show through the first six weeks of the current season.

Like just about all of linear TV, late night has suffered ratings declines. The Tonight Show, The Late Show and Jimmy Kimmel Live! are collectively down about 16 percent in adults 18-to-49 and 7 percent in viewers versus the first six weeks of the 2018-19 season. All three have dropped by at least 15 percent in the demo, but Fallon has taken the largest total-viewer loss, dropping 17 percent compared to 5 percent for Jimmy Kimmel and 1 percent for Colbert. Tonight and Kimmel are in a near dead heat in viewers (1.92 million for Fallon, 1.93 million for Kimmel).

And there are signs that Colbert is encroaching on Fallon’s dominance in digital views. For new content posted to YouTube so far this season, Colbert has notched 206 million views compared to Fallon’s 146 million, with 1.2 billion compared to 921 million, year-to-date. Fallon has had a big head start in producing viral bits and still leads when it comes to all clips posted to YouTube with 2.2 billion views this year.

“Jimmy is still making a good show,” notes a former Fallon producer. “It’s about where the expectations are coming from. Is NBC pushing him to do a more political show or is it Jimmy thinking that’s what he should do?” 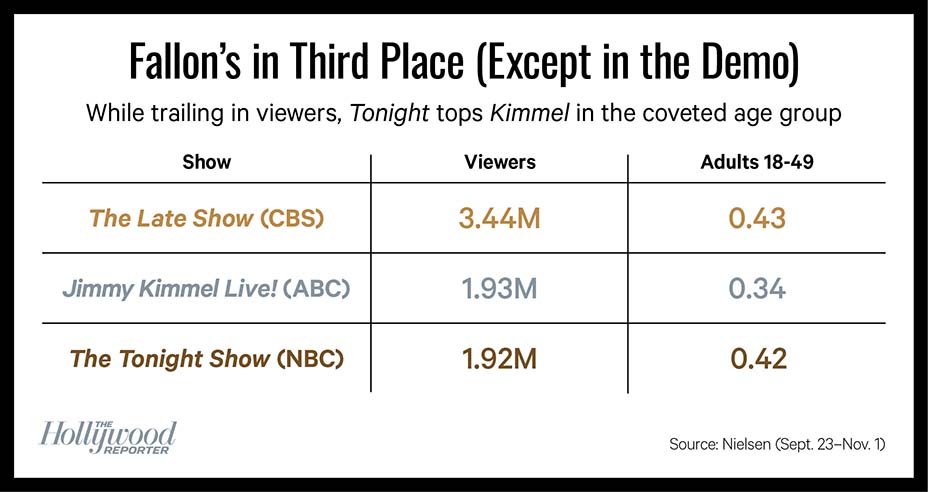 Rick Porter contributed to this report.