Carla Hall, with her winning zeal and perennial smile, has been a food TV fixture since first competing on Top Chef back in 2008. So it’s no surprise she’s among the first back to work since the pandemic halted production, filming the next cycle of Food Network’s Halloween Baking Championship on a closed and sterilized set.

Fans of the chef and best-selling cookbook author don’t have to wait until October to see her in something new. She serves as a judge on Netflix’s Crazy Delicious, which bowed at the top of the summer. But TV judge is a small piece of Hall’s career. The culinary ambassador for the Smithsonian’s National Museum of African American History and Culture, she is one of the conspicuously few Black Americans with “Celebrity Chef” status — and the platform that affords. When Hall spoke with THR earlier in July, she talked about using that platform, the pushback she got when pitching and researching her 2018 book (Carla Hall’s Soul Food: Everyday and Celebration), her dream job (a variety show) and the benefits of owning an air fryer during quarantine.

Your Instagram implies you’re actually in production on something right now.

Yes, Halloween Baking Championship. This is the first time that I’ve flown since the pandemic. I was in a mask, I was in a shield, I was in gloves, I was armed with hand sanitizer. (Laughs.)

What’s set life like with all of the restrictions?

When we got here, we were all required to do a COVID test just to make sure that we can go on set. They have built a tent so that the air can flow through. There are so many precautions. People are staying here on-site, and we’re all sequestered in this beautiful place. It is not bad. (Laughs.) They had to make a few adjustments, but I think it’s going to work. The whole hair and makeup thing is going to be slightly different in how it’s executed, but this could possibly be a model for productions moving forward.

Were you originally supposed to film in July or was it pushed back?

We were supposed to shoot this in March. I was in New Orleans and we were going to do Best Baker in America first and then Halloween. Production stopped after 30 minutes of shooting.

Are you happy to be back in a more normal work environment, or were you in a groove working from home?

I was in a groove. I was never anxious. I have to go home? OK. I’ll go home. I’ll date my husband. I’ll date my house. I’ll date my yard. And then when I got the call, they said oh you can go to L.A. “OK, I’ll get on a plane!” I did that about-face so quickly.

Crazy Delicious has this bizarrely immersive set for a cooking competition. Was it just as extreme on-site?

I videotaped myself stepping onto it for the first time. When you walk in, you smell the dirt and the soil. You’re basically on a farm. And then you open our eyes and you see all these plants. It’s like a Tim Burton movie, like no other set that I have ever seen. We all had that reaction, but I had it every single day that we filmed for three weeks.

The dishes showcased are more extreme than what we’re used to seeing on other food shows. What was the most unexpected thing you were served?

The one that wowed me was this jerk watermelon. I had seen pictures of grilled watermelon, but to actually eat it and to have that umami balance of spice and sweet and juiciness? It was crazy. The cook had also made this simple grilled red cabbage with salt and lemon juice, surprising with the watermelon. We were all blown away. It was just trippy. 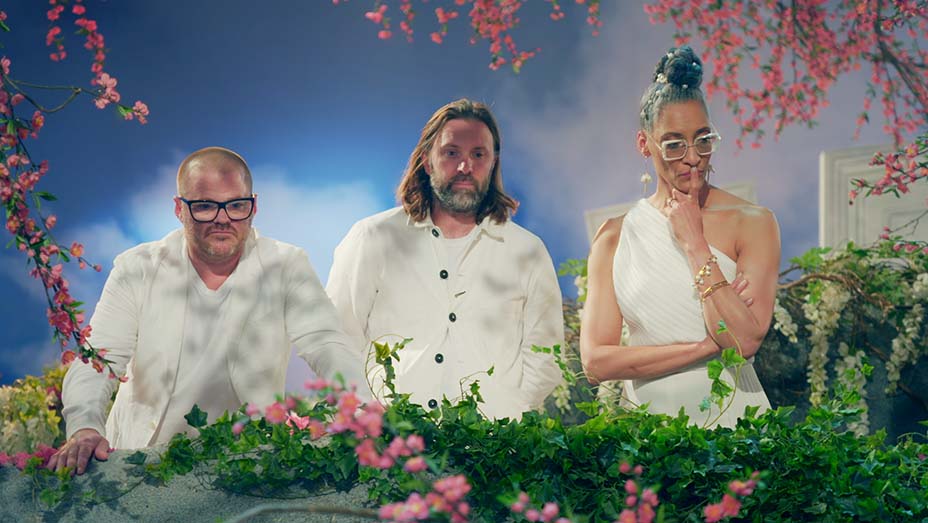 You are one of admittedly few Black chefs with a big platform. How have you been thinking about your job as an ambassador for Black culinary heritage at a time when this country seems to finally be acknowledging systemic racism?

When I did my soul food cookbook — and gosh it’s been two years ago that I was working on it — I had to fight for it. They were like, “But your fans are multigenerational, multicultural.” You don’t say that to people who are Italian or Greek or Chinese or Indian, so why would you say that to me when I want to share my food? Why would soul food be for one group? But when you think about movies, and it’s a Black film, they’re like, “Oh, Black people will go to white movies.” But when it’s a Black film, they don’t think a wider audience will go see it. That is something that we have to look at in this country.

When it comes to food, there are so many people who have written books about this. I’m not the first one. But when I knew I had a platform, I knew that I had to do something that was true to my culture that I wanted to share with people and highlight all of the people who had been doing this. There are a lot of Black people cooking. I just have the platform, so I showed a lot of Black chefs. There are other people, people like Tanya Holland, who don’t have a platform and have been doing this work for years.

But then you look at food TV and publishing, and it is so overwhelmingly white.

Right. The problem with that is you only hear about Black cooks and chefs and people who make a difference in February. That’s when everybody looks for the stories. How often do I hear about your culture?

Nonstop. So if you were in school and you learned something once, for a week or a month, and somebody came back to test you five years later … would you remember it? I think the work here is saying that Black American food is American food and not to separate it. Yes, there’s a difference between soul food and Southern food. But don’t relegate it and, in this climate, don’t make it a specimen. I don’t want to be poked at now that somebody is interested, asking all of these heady questions about what it’s like to be Black. What I do want are the opportunities for more chefs, more producers, more cookbook editors, more of those people coming along so that there is a balance of these stories being told on a regular basis.

Were you happy with how the book was received?

Yeah. And do you know why? Because it was authentically me. Everything about this book came together so organically. I wanted to do this trip in these five states in the South and go back with the intention of really looking at the South. I grew up in the South, but I didn’t look at the South. I was just living it. Even that was “Oh, you shouldn’t do that. It’s expensive.” So, at every turn, I pushed back because I knew in my heart I was supposed to do this. And whenever you feel like that, whenever you feel propelled to do something, you probably are supposed to do it.

When I was on Top Chef, I was 44. I watched some of these young people try to be who they thought they should be on television, but television shows when you’re not authentic. You can’t hide. I think so often people hide behind what they truly are meant to do. You see it all the time.

You did two seasons of Top Chef. And, unlike a lot of reality contestants, you seemed to return very much the same version of yourself the second time around.

I remember getting The Chew and thinking my biggest job is to go on television and be myself. That is harder than people think. It’s also hard when you don’t have storytellers or producers who look like you, but that’s a whole other thing.

A very big, whole other thing.

It’s a whole big thing. But I loved that experience. I learned how to be myself on television. I remember seeing Joanne Stevens, a media trainer, she said, “Whenever you’re looking into the camera, talk to your next boss.” Those words really helped me because we are so often afraid that we are going to be rejected by being ourselves.

You did an interview last year where you said you didn’t want to just be known for food. Given all the time for reflection the past four months have afforded, what do you think you want to be known for?

I do love cooking. But sometimes when people see you in a role, they forget all of the other things you’ve done. Like because of Top Chef, for a lot of people, my life began when I was 44. So if I had my druthers, I would do a variety show that had a little bit of cooking, a little bit of crafting, a little bit of dancing and acting and singing and comedy. That would be my show. And not to say the Black Carol Burnett, because I love her and she is my hero, but if I could have some version of a Carol Burnett Show … that would be my dream. (Laughs.)

Put it out there.

A little lofty, I know. Yeah, that would be my dream. I mean, come on.

At the risk of asking you the millionth home-cooking question you’ve gotten since quarantine started, do you have advice for novices who are experiencing fatigue?

Oh no, I’m fatigued. I am so tired of cooking. And that’s another thing! People don’t expect you to get tired of cooking. So, I get it. Initially people were doing aspirational cooking. Everybody was getting the yeast and making bread. Then they were doing simpler things.  I think the key is to mix it up. I use my air fryer a lot. Just a simpler smashed potato salad, putting those baby potatoes in the air fryer, tossed in oil and salt and pepper and maybe some rosemary. Play with things that take very little effort. If you roast a vegetable and you make your vinaigrette, that’s probably going to be good.

What I am hoping that people have understood, because they’re cooking more frequently, is understanding what they like — understanding their palates. Then it just becomes about taking something very simple, like roasting vegetables or meat, without all the long recipes and condensing it into 30 minutes.

How long have you had an air fryer? They’ve become kind of ubiquitous in the past year.

My air fryer was up in the attic for two years. It is a glorified convection oven, but it’s great. Let me tell you: At least once a week, we do air-fried chicken. That alone is worth it. You just take some chicken thighs — bone in with the skin — season them with paprika, cayenne, maybe garlic powder, salt, pepper and olive oil, and put them in that air fryer at 390 degrees for 17 minutes … what? It’s so crispy. It’s just so good.