Cartoon Network on Thursday unveiled what it’s calling a “holistic slate of content” for 2017-18 as part of its upfront presentation to advertisers.

On the slate are six new series, seven returning shows and more than 20 original mobile games and consoles.

Christina Miller, president of Cartoon Network, Adult Swim and Boomerang, said the network’s strategy aims to incorporate all platforms from the beginning of the development process.

“The strategy of our entire business is really about being multiscreen and multiplatform by design,” said Miller. “It’s about building immersive experiences, end to end, for our audiences. We don’t just create shows; we create worlds. From the beginning, we look at: What is the mobile experience, what is the long-form experience, is there short-form [content] or a game, and if we can do a game, is it for mobile, is it console? We no longer think about single platforms, and we never just cut up the same episode and push it onto multiple platforms. We’ve moved beyond that.”

Among the shows on the network’s slate that have mobile/console game/app components are the recently rebooted The Powerpuff Girls, for which toy-videogame hybrid Lego Dimensions has partnered to add to its roster a new Team Pack and Fun Pack, along with a separate mobile game, “Glitch Fixers,” that features the characters; recently greenlighted series OK K.O.! Let’s Be Heroes, which features an action brawler console game with RPG elements; and Ben 10, the newest series in the long-running franchise that hails from Man of Action Entertainment.

Meanwhile, Cartoon Network also announced several new series and specials Thursday as part of its effort to increase its original content across all platforms as it continues to target kids 4-14 with a particular focus on 6- to 11-year-olds.

The new series include Apple & Onion, which centers on two lovable buddies who are new and naive to the ways of the “big city of sophisticated food” as they go on adventures and make friends. The comedy was created by George Gendi (The Amazing World of Gumball).

Craig of the Creek, another new series, is set in a kid utopia of untamed wilderness where Craig and his two best friends have ventured and tribes of children reign over tree forts and dirt bike ramps. The adventure series was created by Ben Levin and Matt Burnett, formerly of Steven Universe. 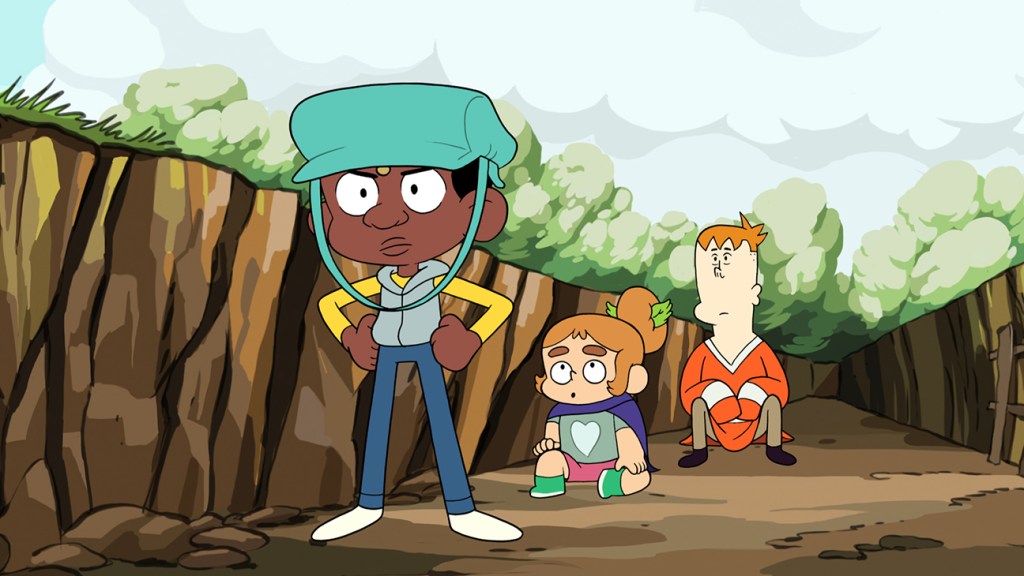 Other news from Thursday’s announcement:

— The network has ordered holiday specials for its series We Bare Bears, with comedian Ron Funches and notable voice actor John DiMaggio among the guest stars set to appear in the third season.

— Adventure Time returns with an eight-part miniseries in which fans (and Finn) learn what happened to the kingdoms of Ooo while he was away at sea.

— Teen Titans Go! will celebrate its 200th episode with a special two-part installment in which Robin, Starfire, Raven, Beast Boy and Cyborg prepare to save the world.

— The Amazing World of Gumball will feature a new Halloween special, as well as an episode with live-action puppets.

In addition to the rebooted The Powerpuff Girls and Ben 10, another familiar property to viewers is Cloudy With a Chance of Meatballs, which is based on Sony’s 2009 feature film and its sequel. The series debuted this month.

Of the decision to reboot Powerpuff Girls and Ben 10, Miller said: “These have tried-and-true audiences, and we had the opportunity to re-create the brands in a more modern way that allows us to tap into total consumption.”

Another new series on the network’s slate is Summer Camp Island, which played at both the Sundance Film Festival and SXSW earlier this year. It was created by Julia Pott (Adventure Time).

And as previously announced, Mighty Magiswords and Steven Universe also have been renewed.