Charlie Sheen has made his mark on Andy Cohen’s new clubhouse.

The actor descended on the new downtown Manhattan set for Bravo’s Watch What Happens Live With Andy Cohen on Wednesday night, joining Craig Robinson, host of Spike TV’s Caraoke Showdown, and an audience of reporters.

The nightly NYC-set aftershow underwent a makeover for 2017, changing its name (formerly Watch What Happens Live) and doubling its 22-seat studio to include a larger bar, performance space, terrace and two original audience seats from the Oprah Winfrey Show, which Cohen and his team bought online, for VIP guests.

“Our control room was the size of a shoebox. Our studio wasn’t much bigger,” Cohen told The Hollywood Reporter ahead of Wednesday night’s show. “Everything’s just expanded. It’s much more user-friendly. And it feels like, almost eight years into this thing, the real deal — it only took eight years.”

The show’s new home, which debuted on Jan. 3, has already attracted big-name guests, including first-timer Stephen Colbert, Jason Sudeikis and, of course, Sheen.

“We went to great pains to preserve the intimacy of the setting and the studio and the clubhouse itself,” said Cohen, who broke a show record on Wednesday when he drank two shots from the resident shotski (a gift from Jimmy Fallon) with Sheen and Robinson. The host, usually seen on TV with a drink in hand, welcomed his audience with a cocktail hour and collected drink orders during commercial breaks. “It’s just a better area for cocktails for the audience. The experience is better for them too,” Cohen said. 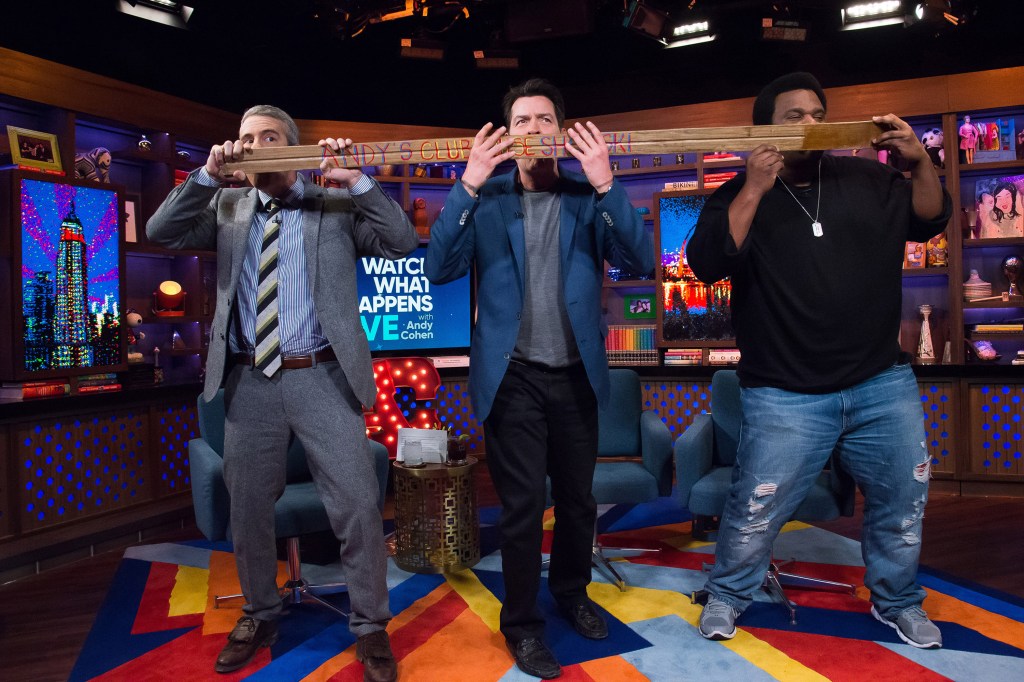 When the cameras began rolling, Sheen, who stars on the upcoming Crackle comedy Mad Families, had the audience laughing and simultaneously shaking their heads — he referred to Rihanna as “that bitch” while discussing their past Twitter feud and knocked his Ferris Bueller’s Day Off co-star Jennifer Grey when he chided, “Talk about a nose job ruining a career.” (Days later, Sheen took to Twitter to apologize to Rihanna: “Pardon my inane self indulgence. let’s have a drink someday (on me),” he tweeted at the star.)

During Cohen’s signature “Plead the Fifth” game, Sheen ranked four of his past female co-stars from best to worst, placing Heather Locklear (Spin City) definitively at the top, calling Lindsay Lohan (Scary Movie 5) a “trip” but naming her second and then said he’d kick Selma Blair (Anger Management) and Jenny McCarthy (Two and a Half Men) to the curb. “They deserve each other,” he said.

When Cohen asked him about his first thought after hearing he was replaced on Chuck Lorre’s Two and a Half Men with Ashton Kutcher, he said, “My first reaction was ‘Who?'”

Charlie Sheen, HIV, a Tabloid and My Insane 2-Year Hunt for a Story

He did, however, say he would be more than open to working with Lorre again, despite their checkered history.

“Of course I would,” he said. “But would he ever consider doing another Charlie Sheen production?”

But it was during the WWHL aftershow, which airs on BravoTV.com, that Sheen, who went public with his HIV diagnosis in November 2015, opened up about his health, saying Hollywood has treated him well since the reveal.

“The closest thing to a cure is en route, and I am the ambassador,” Sheen said of his treatment, an FDA study called PRO-140. “It’s one shot a week; it’s not this hideous cocktail. And most drug commercials these days — the list of side effects are longer than the actual commercial. And ours doesn’t have any.”

Watch the clips below.