Before star Kiernan Shipka arrived on the red carpet for the premiere of her Netflix series, Chilling Adventures of Sabrina, Friday night, one of her co-stars — a black cat — charmed reporters at the event.

The streaming giant’s version of the famous teen witch’s familiar is an actual cat that, sadly, does not speak, but certainly bewitched photographers while it posed for pictures and walked down the red (actually black) carpet. While Salem didn’t stop for interviews, Shipka showed up early and spoke to every reporter on the press line before settling into the theater at the Hollywood Athletic Club for a screening of the Chilling Adventures of Sabrina‘s premiere episode.

The series, born as a spinoff of sorts from The CW’s Archie Comics soap Riverdale, is a spooky take on the Sabrina the Teenage Witch character that originated in the comics in 2014. And yes, Shipka confirmed, it is scary.

“We love horror movies over there and we’re not afraid to pay homage to them,” she told The Hollywood Reporter at the premiere. While it might not be quite as terrifying as another Netflix horror series, the recently launched The Haunting of Hill House, Shipka said the two series are “just different. We love our campiness, too, so a lot of our horror is really crazy.” 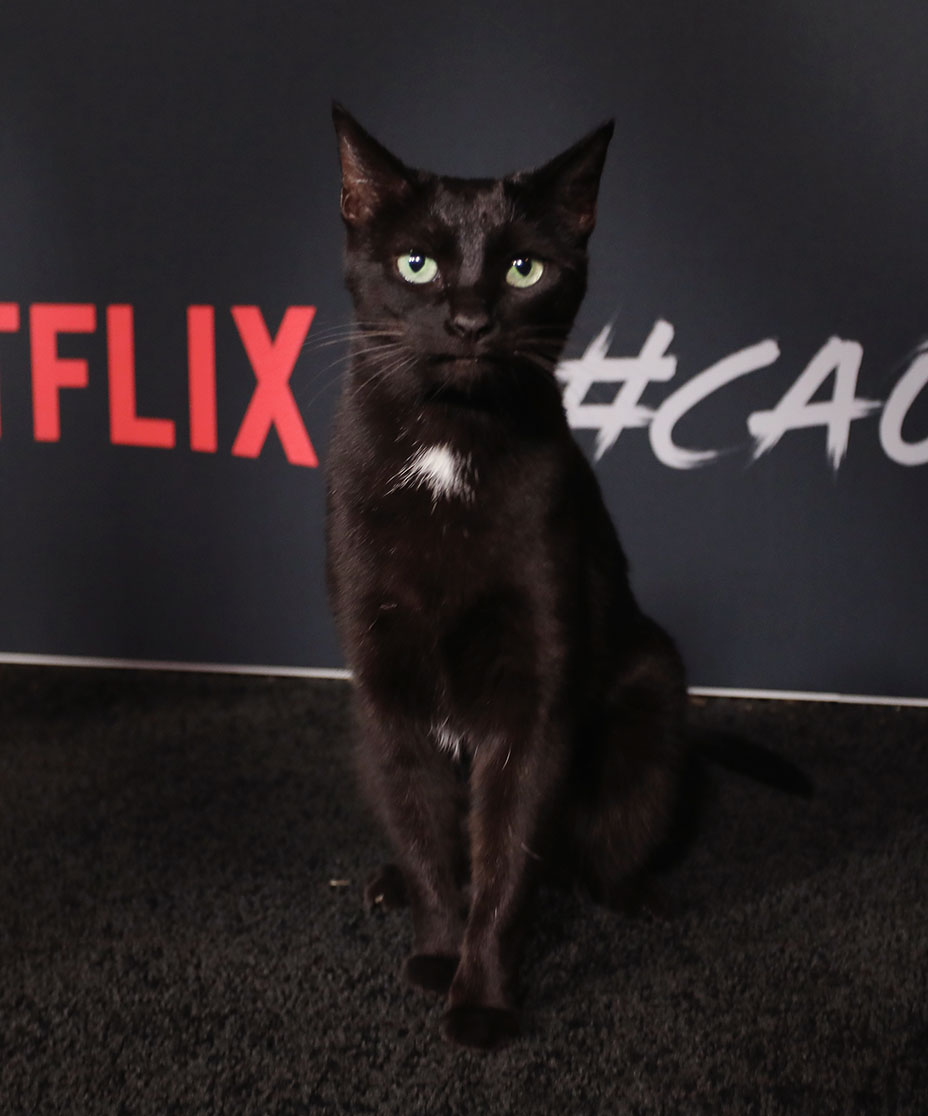 Another show Sabrina is similar to: Riverdale, naturally, thanks to their shared creator and similar out-of-time, throwback worlds. “I think they’re stylistically very different,” Shipka told THR. “Both shows are similar in that they have very specific styles, but I think that Riverdale is a little more noir and our show is a little bit more spooky and a little bit more classical.”

Said Aguirre-Sacasa, “It’s a little more innocent than Riverdale. You know, in Riverdale everyone’s having sex in the showers and there’s gang wars, and strangely Sabrina is a little more wholesome — even though they do worship the devil and there is cannibalism and there is human sacrifice and things like that. So in some ways, it’s similar; and in other ways, it’s very, very different.”

Kiernan Shipka Takes on the Patriarchy in 'Chilling Adventures of Sabrina'

After a screening of the premiere episode, Aguirre-Sacasa, Shipka and her castmates filtered into the Hollywood Athletic Club, which had been transformed into an immersive, Instagram-friendly experience of different themed rooms: a dark forest, an altar to worship the Dark Lord, an homage to the Spellman sisters’ mortuary (where Sabrina lives with her aunts in the new series) and a seance room. An interactive photo booth had a fog machine, fan and rigged lockers that blew open as partygoers walked by, giving them an Instagram-ready slow-mo video to post.

Food and drinks were similarly festive: everything from the cocktails (an activated charcoal lemonade and tequila drink called “The Dark Lord”) to the dinner (braised shortrib on black buns, mini-hasselback potatoes in tiny cauldrons) and dessert (black caramel-coated crabapples, charcoal black cherry pastries) was appropriately on theme. While a DJ played party music all night, the dance floor suddenly flooded with people around 11 p.m. as the 18-year-old Shipka and her co-stars danced to songs by DMX, Lauryn Hill, Britney Spears and other ’90s throwbacks that were released before half of them were born.