Will this be the year that Emmy voters finally give a rose to The Bachelor?

The show — which debuted in 2002 and has spawned numerous spinoffs, from The Bachelorette to Bachelor in Paradise — has managed to stay part of the zeitgeist but has never scored a nomination.

Longtime host Chris Harrison has a theory as to why: “The [reality competition program] category came around about four or five years into us already being on the air, so we weren’t the young, sexy show anymore, and we weren’t as relevant as the new shows. But ironically, the show is so socially relevant now, 16 years later, that we probably have a better shot to be nominated and win an Emmy than we ever have.”

Harrison, 46, spoke to THR about how the ABC franchise — Emmy eligible for the 13th season of The Bachelorette, After the Rose and The Bachelor Winter Games: World Tells All — has stayed relevant, criticism over its representation of people of color and why a season-finale proposal isn’t actually necessary.

Why do you think this franchise continues to dominate watercooler talk so far into its run?

The simple answer is, it strikes a chord about the one thing we all relate to and we can all empathize with, and that’s relationships and companionship. And no matter where you are in the world and what you do, you get that.

Rachel Lindsay made history for being the first African-American star of the franchise. What are you doing to ensure people of color are represented, and how soon might we see another nonwhite star?

Rachel obviously was a great first step, and we do a great job of trying to cast as much diversity as we can so everybody feels like they are represented. But at the same time, we are doing an entertainment show, and the main job we have is not a social one. It is an entertainment one, where we are trying to entertain as many people as possible and get as high of ratings as we possibly can. That’s how the people who work for The Bachelor stay employed. So there’s a delicate balance of, yes, you have a social responsibility whenever you do anything in this world, but at the same time you also have a business responsibility, and it’s a very careful balance. In my opinion, Rachel wasn’t just a black Bachelorette; she was the right Bachelorette. She was the best choice for that season, and that’s how I love to have diversity.

We also saw, in Rachel’s season, that Peter wasn’t ready to propose. Do you feel pressure to give viewers a happy ending each season?

I do think there is self-imposed pressure [from the cast]. I know they want to please us because they see how hard all the producers and crew are working. But the show’s never been predicated on the fact that it works 100 percent of the time because that’s not life. Sometimes marriages break up, sometimes relationships don’t work. That’s what makes the show so relatable: You don’t know what’s going to happen. 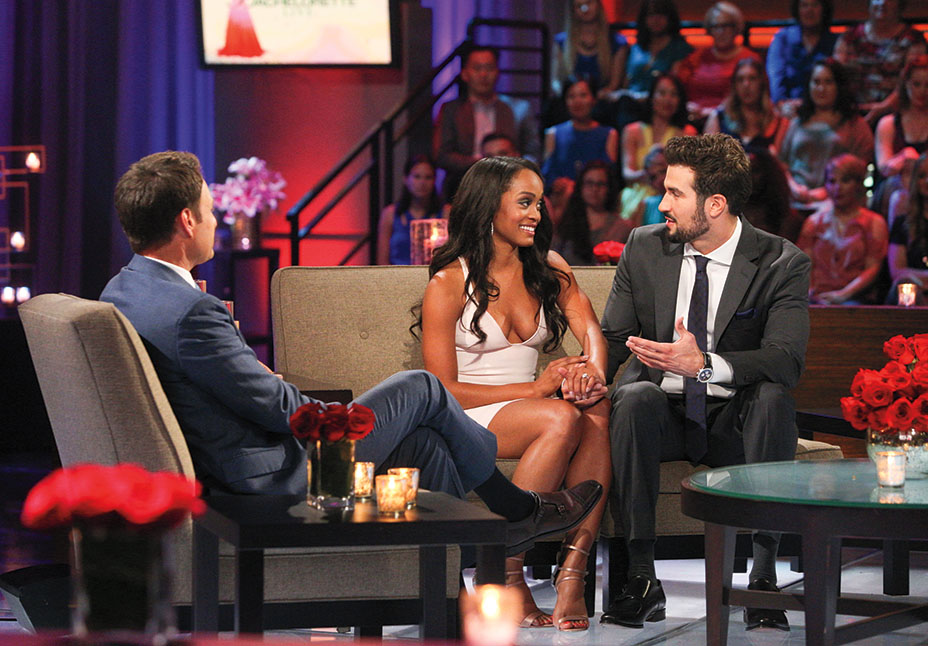 Looking back, how do you view what transpired on Arie’s season?

If I gloat about it, I feel like I’m rolling in the demise of Becca and how sad it was. Our show actually wouldn’t work if it were perfect every time because then why are you watching? People always go, “Oh, you guys made him do that. You wanted him to propose.” No, it really doesn’t matter to us as far as ratings go. Our show is going to survive and actually thrive no matter what happens because that’s what’s so captivating about it: You don’t know, and you’re going to live through this with them, no matter what it is.

Things can get really heated on After the Final Rose. How do you find that balance of letting people vent versus it becoming an attack?

After the shutdown of Bachelor in Paradise last summer because a producer filed a sexual misconduct allegation, what will the conversation be before shooting this year?

It’ll be the same, and honestly, I’ve had a lot of time to think and talk about last summer, and I really wouldn’t have done much different. All you can do is handle situations at that time with the information that you have at that moment. It’s easy to sit back on Monday morning and fix what happened over the weekend. But I thought we handled everybody with dignity, grace and respect, and everybody was taken care of. This summer, we’ll do the same.

If you could host one other reality competition, which one would it be?

Iron Chef. I’m a big foodie and I love the Food Network. I watch it alarmingly too much.