Continue to The Hollywood Reporter SKIP AD
You will be redirected back to your article in seconds
Skip to main content
April 28, 2020 5:45am

CNN has distinguished itself from Fox News and MSNBC in more ways than one in its coverage of the novel coronavirus pandemic.

While all three networks have flooded the airwaves with medical experts and government officials from morning to night, CNN viewers have been treated to on-air testimonials from three anchors who have tested positive for the virus.

Primetime anchor Chris Cuomo has been the star of the show, but Brooke Baldwin and Richard Quest have also talked directly to viewers about their symptoms — or lack thereof, in Quest’s case.

While some have questioned the ethics of having news anchors speak so personally about their health and family life, not to mention Cuomo’s chummy interviews with his governor brother, the network has undeniably offered a mix of content that has been unmatched in the medium. In turn, CNN has received a larger ratings boost than its rivals.

A senior producer at the network, who was not authorized to speak to The Hollywood Reporter, credits president Jeff Zucker’s “wartime” leadership.

“He’s struck a good balance between keeping us working and moving forward and making sure people are physically and mentally healthy, and recognizing when people need to take some time off,” the producer says.

Between early March (when coronavirus coverage ramped up) and late April, CNN has seen a 139 percent year-over-year increase in total primetime viewership, compared to boosts of 48 percent for Fox News Channel and 28 percent for MSNBC. While it still trails both networks in total viewers in primetime, CNN edged out MSNBC in the 25-to-54 demographic and trailed Fox News by only 121,000 viewers. (CNN has also seen a massive increase in online visitors.) 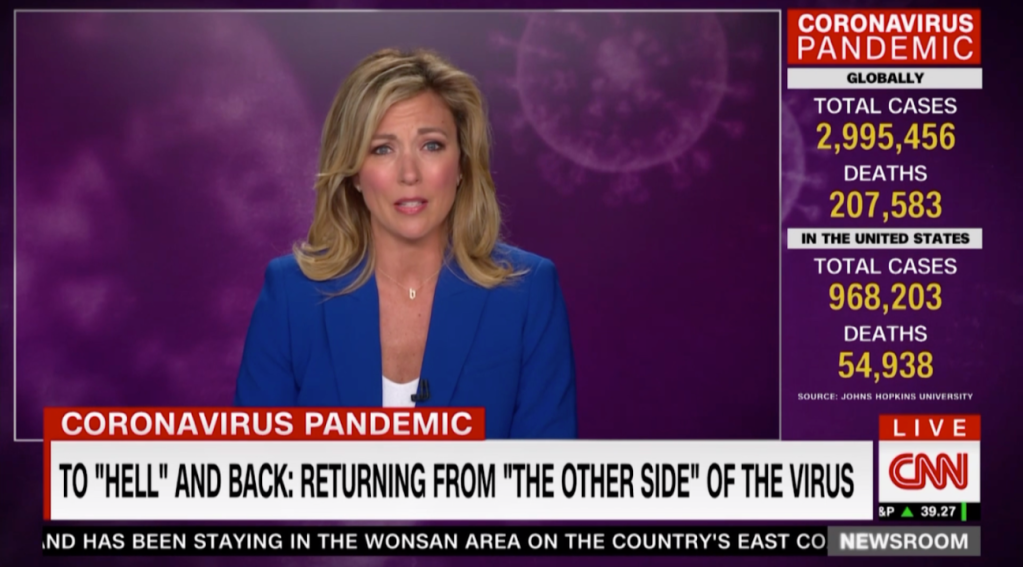 Some of that bump is undeniably a product of the public’s insatiable interest for news about a very pressing public health disaster, but CNN’s “flood the zone” coverage of the virus fits Zucker’s programming strategy of going all in on one particular story. In the past, Zucker’s CNN has faced criticism when that One Big Story was the disappearance of a Malaysian aircraft in 2014 or a “poop cruise” in 2013.

“This actually works perfectly with his one-story strategy,” a former senior producer at the network says. “This is the story. This is the only story. Really, there is nothing else. It’s a very defensible posture.”

CNN brass sees the coronavirus story as an opportunity to put its massive journalistic footprint — including reporting from more than 30 international correspondents since January — to good use and to prove out the brand’s mission.

Says industry analyst Andrew Tyndall, “CNN has built a lasting reputation over the years as a reliable and comprehensive source of coverage when major news breaks and is now reaping the benefit of decades of brand-building by being treated as the go-to channel by marginal viewers.”

The producer currently working for the network says Zucker told staffers that the coronavirus is “the story of our generation.” And, the person adds, moving forward, “The focus is going to be 100 percent on COVID, or at least 99 percent on COVID and the response to it.”

Over the last few years, CNN has faced criticism for its “food fight” political punditry matches, not to mention its stable of pro-Trump contributors. But the spread of the coronavirus has temporarily negated those two points of contention. Over the last two months, the network has mostly scrapped partisan debate — though left-leaning contributors and hosts have taken frequent shots at President Trump’s handling of the crisis — and the network’s ever-shrinking team of conservative contributors has almost vanished.

Duffy’s tenure at CNN has been rocky from the start. Only nine days after he first appeared on the network, he was called out publicly by two CNN colleagues for his comments about then White House national security official Alexander Vindman. But despite his recent absence, Duffy remains a network contributor, per a CNN spokesperson.

Chris Cuomo’s frequent testimonials on the network have been controversial externally, though the producer at the network says there’s been “no groundswell of opposition” to them internally. (“Honestly, it’s good TV,” says the CNN veteran.)

Zucker defended the appearances by saying, “You get trust from authenticity and relatability and vulnerability. That’s what the brothers Cuomo are giving us right now.”

But another current CNN employee who spoke with THR criticized Cuomo’s appearances, particularly the dramatic moment last Monday when he was filmed leaving the basement where he was quarantined to reunite with his family, as “reality TV.”

“Him coming out of the quarantine with the cameras there, that’s all Jeff Zucker reality TV, and that screams Zucker,” the person says, referring to the network president who brought The Apprentice to NBC and helped make Trump a star.

A third current CNN employee says eyebrows were raised when Chris Cuomo beamed into New York Gov. Andrew Cuomo’s April 2 briefing to give an update on his condition. “More people said, ‘OK, we may be going too far,'” the person says.

CNN’s primary industry sparring partner, Fox News, has used the network’s personal involvement against it. Primetime host Laura Ingraham said last Wednesday that CNN has “increasingly become the story” and asked, “What is happening over there at James Earl Jones’ old ‘This is CNN’?” Her partner, Raymond Arroyo, said, “It almost appears as if they’ve launched a series of new reality shows.” 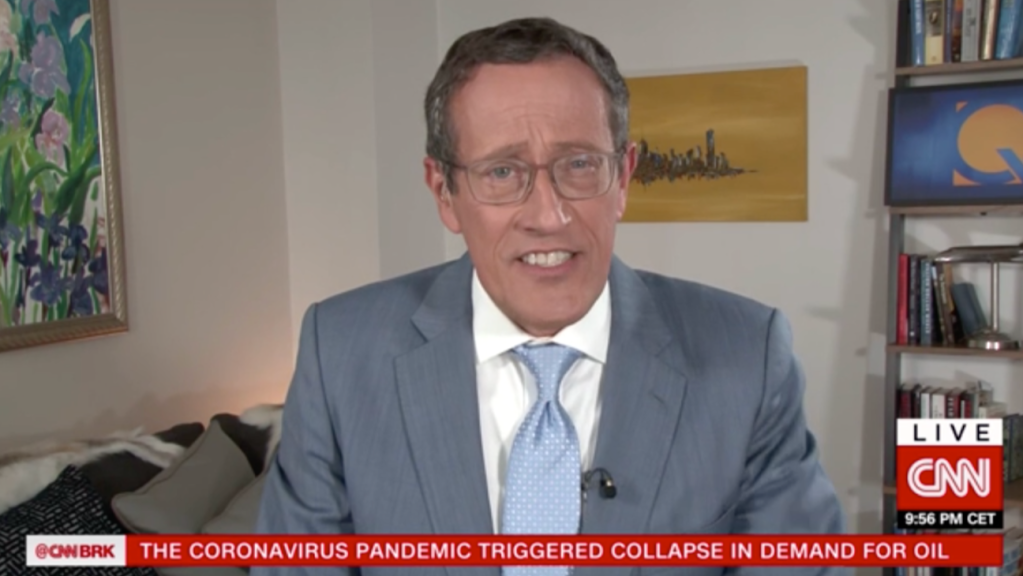 But even Ingraham seemed to pull her punches a bit, acknowledging that Cuomo, Baldwin and Quest are dealing with a deadly serious virus. “Well, we’re glad everybody’s getting better,” she said. “They’re always kind of nasty to us, but … I hope they’re all OK, and I’m glad they’re OK.” (She also sympathized with Cuomo for being confronted by a bicyclist “who tried to COVID-shame him.”)

Dr. Sanjay Gupta, CNN’s chief medical correspondent, has been one of the network’s biggest stars over the last two months. Viewers have been able to watch Gupta flinch during an invasive, nasal swab coronavirus test and stay still during a “just a poke” coronavirus antibody test. “It did not look pleasant,” Anderson Cooper told him.

The duo of Gupta and Cooper have already moderated eight weekly town halls on the virus, which CNN employees see as a massive public service.

“it is such a relief that cable news has reverted to covering news for a change — their original raison d’être — because, frankly, during the Trump years, they have behaved more like politics channels than news channels,” says Tyndall.

CNN employees who spoke with THR also praised the network’s quick action in implementing social distancing policies at the office and then emptying the building aside from a few essential staffers. In a March 2 email to WarnerMedia news and sports employees, Zucker announced travel restrictions and said that “internal meetings should be conducted via phone or videoconference” or canceled altogether. In a memo last week, the network boss told employees that a majority would not return to the office “in any significant way before the end of the summer.”

“They’ve been great,” a current CNN producer says. “I couldn’t imagine them being more on top of it than they are.”

Another element of CNN’s coverage of the crisis has been the continuation of a long-standing beef with the Trump White House, which has attacked the network verbally, pulled a reporter’s press pass, sued them (through the campaign), and recently told campaign supporters — demonstrably falsely — that the network is delaying broadcasts of the president’s daily coronavirus task force briefings by 15 seconds in an effort to “silence him.”

CNN and MSNBC have both faced criticism for airing big chunks of the briefings, but one of the current CNN producers says that most staffers are fine with the network’s editorial choices, which have included increasingly straightforward chyrons, including one that called a briefing “propaganda.”

“I think a lot of people in the network are as frustrated as anybody with how these press conferences are being done, but I think the sense among most people is that the network is striking the right balance right now,” the producer says. “I don’t sense any sort of groundswell of rebellion about how we’re covering [the briefings].”

But, the longtime former employee counters, “I think there’s a very serious journalistic argument that could be made for not carrying these briefings. I think they should be discussing it every single day. I think it’s a sort of tango with Jeff Zucker and Donald Trump, always.”

A CNN executive says the network’s approach to covering the briefings has “evolved” since the early days of the crisis, when there was more public health information given out each day and fewer presidential tangents about the benefits of injecting disinfectants.

“I don’t think attacks on the press or Democratic governors are particularly valuable,” the CNN executive says. “[Trump’s] position and the bully pulpit, it’s a powerful tool, but it comes with a responsibility. There can be no expectation that we would take all of these briefings when the White House has sometimes abused that responsibility.” (The White House aired a “propaganda” video on April 13 and brought a pillow mogul to the podium two weeks earlier.)

According to the executive, CNN’s standard for determining whether to air portions of the briefing is: “Is it newsworthy? Is our audience going to learn something? Is it important for our audience to see this? Is it more important than something else we might put on?”

When to cut in and out of the daily press briefings are “real-time decisions that are made in the control room by the executive producer, but meeting CNN’s standards.”

At this point, CNN viewers are probably used to the president’s trademark animosity toward the network’s White House reporters, Jim Acosta, Kaitlan Collins and Jeremy Diamond. (“They’ve handled themselves professionally and have been extraordinarily effective in their role,” the CNN executive says.)

The network’s ratings suggest that viewers are not turning the channel, even when the president is using the free airtime to yell at reporters and try to escape blame for the federal government’s slow response to the crisis.

The former network producer says that “clash” is “the provocative thing that draws you in,” adding, “I think everyone wants to watch cable news and take a bath in the chaos.”

"I Was Built for the Battle": Chris Cuomo Is Fighting for His Life on CNN