In its first of the #MeToo era, San Diego Comic-Con served as an example of fandom at its best.

Jamie Lee Curtis shared a loving moment with a fan who credited her role in Halloween for saving his life. The casts of The Walking Dead and Arrow praised their new — and first — female showrunners. Yvette Nicole Brown joined Aisha Tyler as the only women of color to moderate panels in Hall H, the biggest at the convention center.

Supergirl made history in announcing that Nicole Maines, the activist whose case provided an important legal milestone for transgender individuals, will play TV’s first transgender superhero. And Ballroom 20, the venue’s second-largest, exploded in applause when the well-spoken Maines made a surprise appearance onstage.

That came two days after Jodie Whittaker, BBC America’s first female Doctor Who in the show’s five-decade history, crushed her debut in Hall H during a panel moderated by a woman, in this case IGN editorial manager Terri Schwartz, who replaced Chris Hardwick.

Comic-Con: Cosplay Community Looks Out for Their Own Amid #MeToo Era 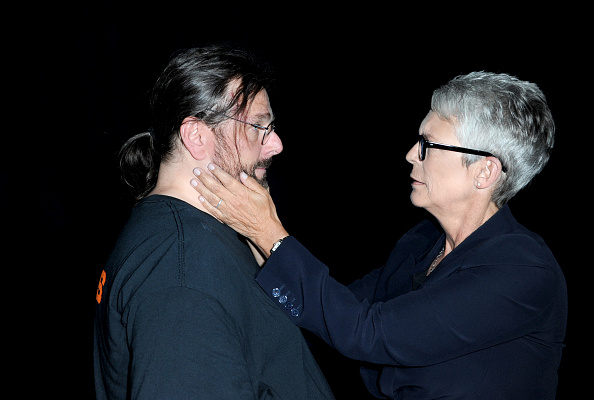 Hardwick, facing allegations of abuse from ex-girlfriend Chloe Dykstra, was replaced at the podium for Doctor Who, The Walking Dead, Fear the Walking Dead and Warner Bros.’ feature film presentations. Brown led two of the four and generated one of the four-day confab’s biggest moments: Andrew Lincoln’s emotional announcement that he was departing The Walking Dead after a 10-year and nine-season run, which received a standing ovation. Brown’s Halloween moderating duties generated the same when a fan emotionally recalled how he came to Comic-Con just to see Curtis to thank her for saving his life. In a rare move that broke down the wall between convention-goers and talent, the actress journeyed off the stage and well into the audience to embrace him. 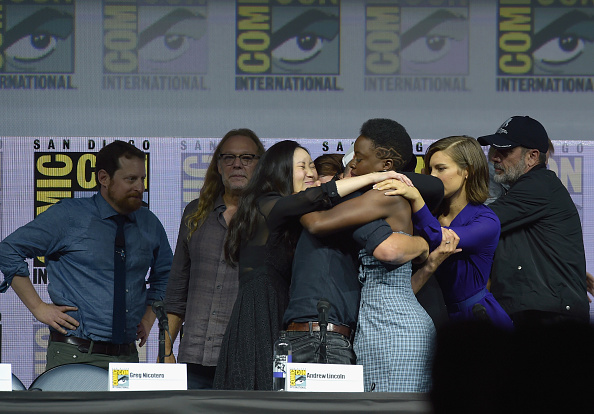 So, what was different this year?

The pop culture festival, where 130,000 people flock annually to see the best of film, TV, comics and more, was expected to be a subdued affair this year. Box-office king Marvel Studios, HBO juggernauts Game of Thrones and Westworld, Netflix’s Stranger Things and Outlander all took the year off.

Maybe it was the lack of the aforementioned juggernauts. But maybe — after getting a black eye when Internet trolls bullied Star Wars breakout Kelly Marie Tran off of social media — just maybe, it was the idea that fandom, when at its best, really isn’t so toxic.

Comic-Con TV Midpoint Report: What Stood Out So Far

Shows on the cusp of going from cult favorite to mainstream were rewarded with more. Syfy’s Wynonna Earp (about Wyatt Earp’s kick-ass great, great granddaughter) and Freeform’s and Marvel’s teenage superhero show Cloak and Dagger earned renewals. Syfy’s Z Nation — quietly now in its fifth season — got a Netflix straight-to-series spinoff (with a female lead). Speaking of more, Comic-Con was also home to multiple reunions this year, with 10-year anniversary sessions for AMC’s Breaking Bad, Star Wars: The Clone Wars (which came armed with news of a revival series) and Dr. Horrible’s Sing-Along Blog (a one-shot sequel is in the works). 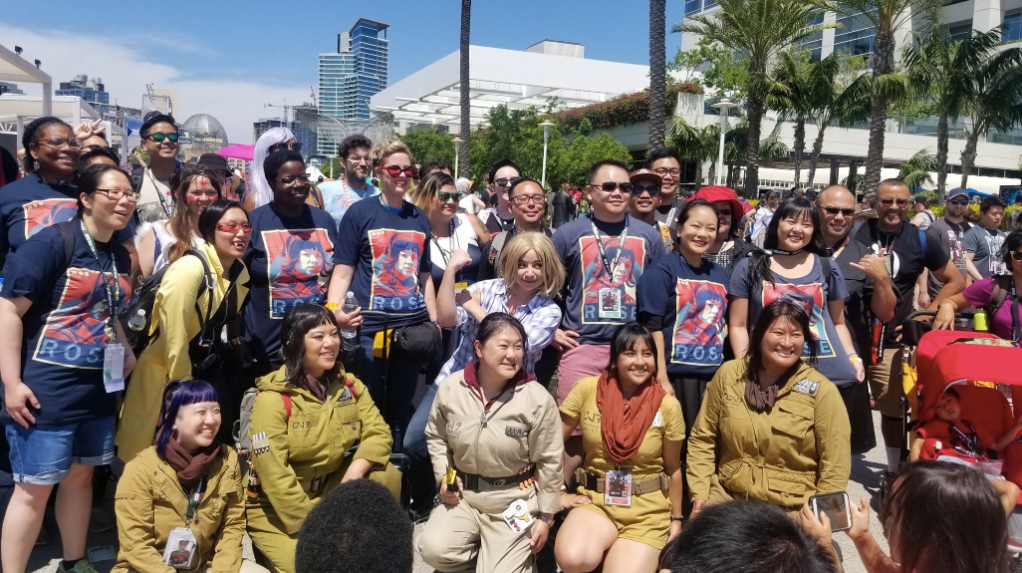 Star Shameik Moore wowed the crowd by introducing footage from Sony’s animated Spider-Man: Into the Spider-Verse, in which he voices Afro-Latino teen Miles Morales, and he spoke about the powerful image of seeing a Spider-Man of color on the big screen. Wonder Woman 1984 director Patty Jenkins and stars Gal Gadot and Chris Pine brought early footage from the sequel to raucous applause, and with a Q&A filled with young girls talking about the character’s influence, further proving that the superheroine has become Warner Bros.’ most impactful onscreen star.

On the comic book front, the convention showed that the future of the medium is more diverse, inclusive and interesting than just superheroes. Creators spoke repeatedly about the importance of seeing all readers reflected in their stories. The Eisner Awards, voted for by comic industry professionals, was dominated by women, with Emil Ferris’ My Favorite Thing Is Monsters and Marjorie Liu’s and Sana Takeda’s Monstress ending the night as its big winners. Liu’s victory for best writer made her the first woman to ever win in the category.

The most memorable speech came from writer and editor Taneka Stotts, who accepted the best anthology award for Elements: Fire, a collection of work by creators of color. More than any other, this was the year when Comic-Con pointed toward a medium by everyone, for everyone.

Elsewhere, a group of women united for a rally Saturday outside the convention center in which they cosplayed as Tran’s Star Wars character Rose (in a showing that was praised by director Rian Johnson).

But the convention also made for some uncomfortable moments that were glossed over rather than used as starting points for productive conversations. On Friday, Disney fired Guardians of the Galaxy director James Gunn after a series of 10-year-old offensive tweets. (Gunn’s planned Comic-Con appearance in Hall H for an upcoming mystery Sony horror film was pulled.) A day later, Warner Bros. brought Lego Movie star Chris Pratt out to promote the movie. The actor, who also stars in the Guardians films, did not address Gunn’s exit, and a planned press appearance from Pratt and co-star Elizabeth Banks was canceled.

On the Ground at Comic-Con: Inside the Activation Hits (and Misses)

More glaringly, Fantastic Beasts: The Crimes of Grindelwald star Johnny Depp made a brief appearance, in character, during the end of panel for the Harry Potter spinoff, his first major public appearance since a widely read Rolling Stone profile that painted a portrait of a star in crisis. His continued involvement in the franchise has been controversial following allegations of domestic abuse levied by ex-wife Amber Heard, who dropped the claims as their divorce was settled in 2016. Just minutes after Depp’s Hall H appearance, Heard came to the stage as part of the Aquaman portion of the presentation, and while the footage rocked the house, the narrative online quickly became about the juxtaposition of the two stars. While Aquaman director James Wan and stars Jason Momoa, Patrick Wilson, Nicole Kidman and Yahya Abdul-Mateen II participated in a press event after the panel, Heard was notably absent. 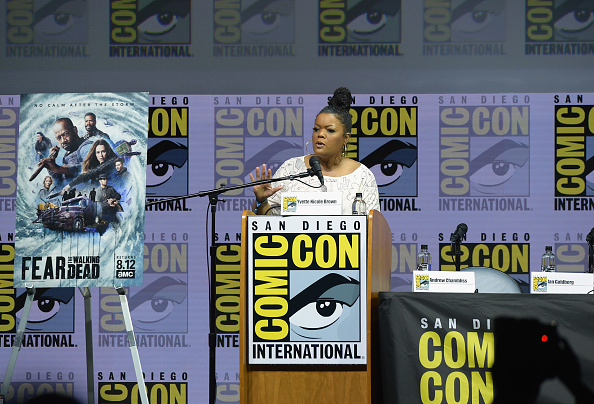 Of course, a moderator-less Dr. Horrible panel meant only fan questions for Joss Whedon, the one-time Buffy favorite who is rebooting the cult hit with a black lead and whose ex-wife called him a “fake feminist” in a scathing essay. He escaped the panel without so much as a mention of the growing backlash against him, signaling the complicated relationship fandom has with someone it can revere and castigate at the same time.

A perfect example was Batman comic book writer Tom King, who showed up to Comic-Con with a bodyguard in tow. King is one of the most popular writers in comics, and over the weekend won an Eisner for his work with the Caped Crusader. But he also penned the controversial (non-) wedding of Batman, which engendered death threats, forcing his agents to hire protection.

“We’re aware of the comments directed at Tom King on Twitter and are supportive of  his decision to engage security to ensure a perfectly safe environment in San Diego,” DC said in a statement. “We take any and all threats against DC talent and employees seriously. Comments such as these go against everything our company and industry represents.”

Even as creators and fans debate the future of geek culture, and even as Comic-Con may still have a way to go, if this year was any indication, it is certainly heading in the right direction.