Actors are usually overjoyed when their shows are renewed, but Fresh Off the Boat star Constance Wu had a very different reaction.

“So upset right now that I’m literally crying. Ugh. Fuck,” she tweeted Friday afternoon, followed by “Fucking hell” less than an hour after ABC announced that the family comedy was returning for a sixth season. When another Twitter user congratulated her on the renewal, calling it “great news,” she replied, “No it’s not.”

The actress also made her feelings clear on the series’ Instagram post about its renewal, commenting with a single word: “Dislike.”

ABC declined comment. Representatives for Wu and Disney-owned producers 20th Century Fox TV have not yet responded to THR‘s request for comment. Wu later clarified her comments via Twitter, saying her initial reactions were not about the show renewal and “on the heels of a rough day.”

Wu skyrocketed to fame as the breakout star of Fresh Off the Boat, which at the time of its 2015 premiere was the first Asian American comedy on broadcast television in two decades. Last summer she starred in the first Asian American studio film in a quarter-century, Warner Bros.’ Crazy Rich Asians, and she recently wrapped on STX Entertainment’s stripper movie Hustlers opposite Jennifer Lopez. Arguably the most currently in-demand Asian American actress of her generation, Wu has been eager to take advantage of the momentum in her movie career, and the demands of a broadcast series schedule could interfere with that, insiders tell THR.

Roughly one hour after she started tweeting, Wu tried to explain her initial comments in one post, saying that people were making “assumptions” about the meaning of her previous tweets. “That was not a rampage, it was just how I normally talk. I say fuck a lot. I love the word. Y’all are making a lot of assumptions about what I was saying. And no, it’s not what it’s about. No it’s not..what this is all about. Stop assuming.”

Several of her initial tweets were also then deleted, before she tweeted again: “Todays tweets were on the heels of rough day&were ill timed w/the news of the show. Plz know, Im so grateful for FOTB renewal. I love the cast&crew. Im proud to be a part of it. For all the fans support, thank u & for all who support my casual use of the word fuck-thank u too.”

On Saturday, Wu posted an essay on Twitter, offering more clarification about her initial reaction to the news of Fresh Off the Boat‘s renewal. “I love FOTB. I was temporarily upset yesterday not bc I hate the show but bc its renewal meant I had to give up another project that I was really passionate about,” she wrote. “So my dismayed social media were more about that other project and not about FOTB.”

Added Wu: “But I understand how that could feel interconnected and could get muddled.”

She also said that her “words and ill-timing were insensitive to those who are struggling, especially insensitive considering the fact that I used to be in that struggle too.”

Toward the end of her post, Wu reiterated how much she appreciates her role on Fresh Off the Boat. “People ‘assumed’ that I meant I don’t love and enjoy FOTB. But I do love and enjoy it. I hope you believe me.”

These words are my truth. I hope you hear them pic.twitter.com/l6SvbFcUlj

Fresh Off the Boat was renewed Friday for a sixth season. The renewal arrives after the 20th TV-produced single-camera comedy transferred ownership to Disney following Fox’s $71.3 billion asset sale. The series had been a perennial bubble comedy — shows produced by outside studios typically are more expensive, and FOTB is not a ratings juggernaut — but its ownership this season actually helped the comedy score a renewal. 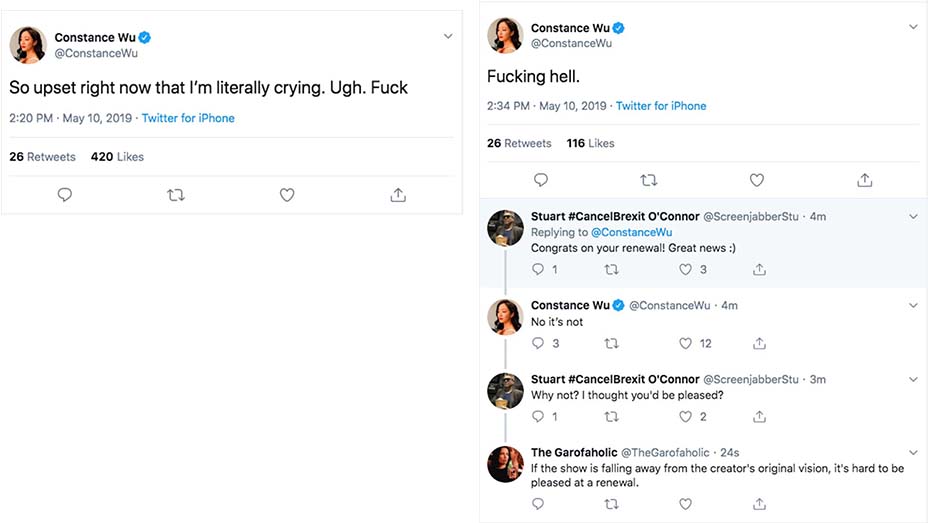 Still, there are changes coming to FOTB after showrunner Nahnatchka Khan departed her longtime overall deal with 20th TV for a lucrative four-year, eight-figure pact with rival studio Universal Television. 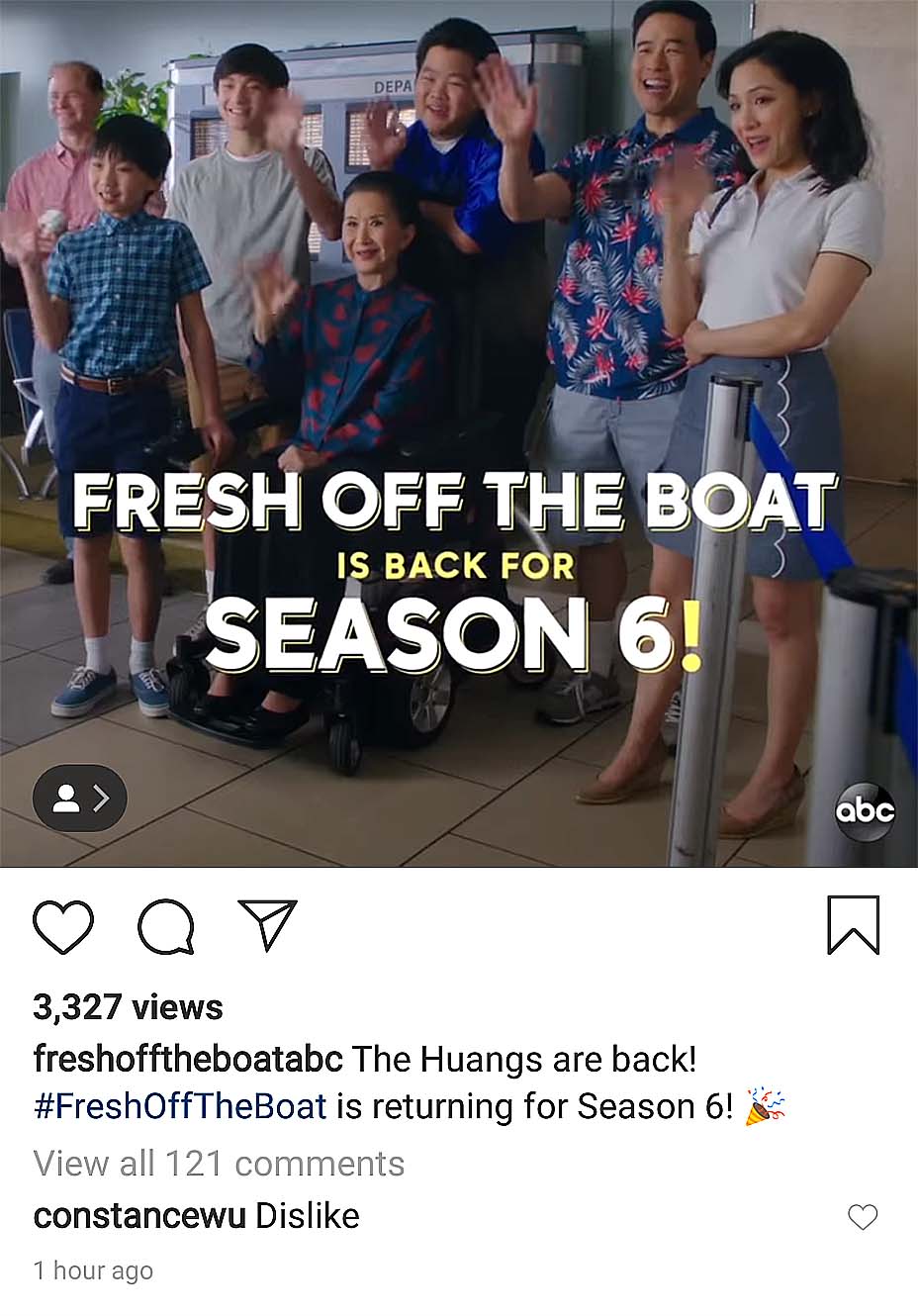 Keep track of all the renewals, cancellations and new show orders with THR‘s scorecards for ABC, CBS, Fox, NBC and The CW and with all the latest pilot pickups and passes with our handy guide. For complete coverage, bookmark THR.com/upfronts.

May 11, 9:30 a.m. Updated with Wu’s Twitter essay, offering more clarification about her initial reaction to ABC’s renewal of Fresh Off the Boat.