[This story contains spoilers for “Crisis on Infinite Earths, Part 1” on The CW.]

As soon as it was announced that The CW’s DC Comics shows would make Crisis on Infinite Earths its next big crossover event, viewers with even a little bit of comic book knowledge knew this would be a big deal. The original 1980s DC storyline resulted in a massive shake-up when it came to its pre-established continuity, and The CW shows, in launching a five-part crossover event that would encompass not just all of the existing series but also many other versions of these beloved characters, made it clear that the aim was for something equally epic.

The event kicked things off Sunday on Supergirl by doing the seemingly unthinkable: At the end of Part 1, Oliver Queen (Stephen Amell) sacrifices his life as the people of Earth-38 attempt to escape the destruction of their world, fighting to his last breath to save a billion others from dying as a result of an antimatter wave rippling through the multiverse.

'Batwoman' Canceled After Three Seasons on The CW

Arrow, as led by Amell, has been the flagship series of the Arrow-verse, and so killing off the star is, needless to say, is pretty significant given that the drama helped to reinvent an entire network. But as executive producer Marc Guggenheim explained at a recent press screening of the crossover, it felt like the right choice — especially because they had given viewers more than just a warning.

Hints that Oliver would die in the epic crossover began a year ago, first during the “Elseworlds” crossover trilogy, then in the Arrow season seven finale in which the Monitor (LaMonica Garrett) flat-out told Oliver what would happen to him during the upcoming cataclysmic event.

“The dilemma that we presented to ourselves was that we spoiled our own story,” Guggenheim said. “So if Oliver dying isn’t the surprise, what is the surprise? The timing of him dying?”

Killing Oliver in the first episode, he said, was a decision made to circumvent the expectations of viewers. “We’ve kind of figured that the audience is expecting that Oliver will die in the climax in the fifth hour,” Guggenheim said. “So if we went in the exact opposite direction, and killed him off at the end of hour one, we accomplished two things — we hopefully do surprise the audience. That’s absolutely the intention. And we also really establish the stakes that going into the next four hours, if Oliver Queen can die, then no one is safe.” 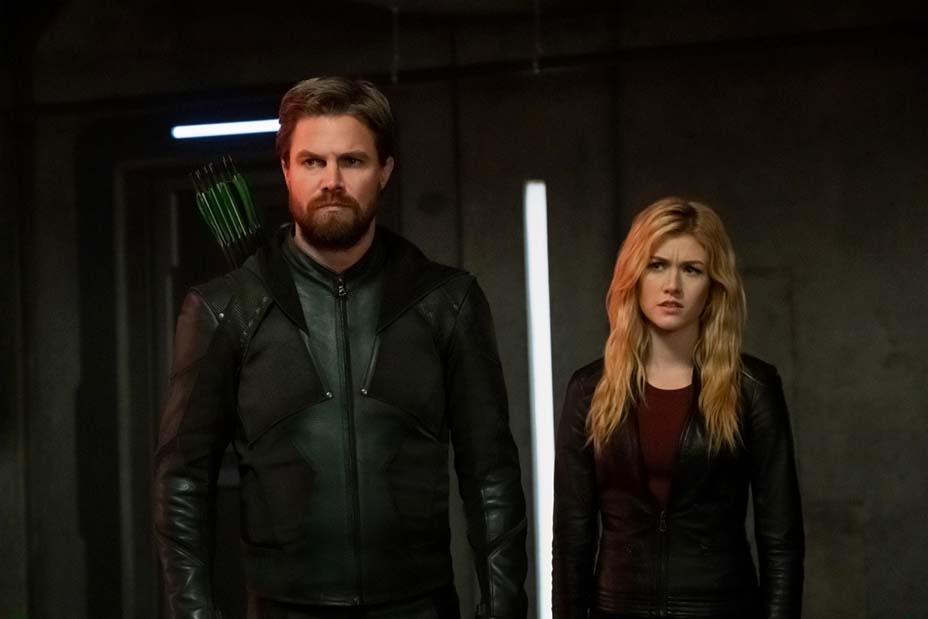 Death in the DC universe, of course, is rarely a permanent thing — there’s also the power of the Book of Destiny, which is one way that the events of the first hour could be reversed. In addition, the mystical Lazarus Pits have been used more than once on Arrow and other shows to bring people back (albeit without their souls), which is how Sara Lance (Caity Lotz) was able to return to life after ostensibly drowning on the fateful voyage that marooned Oliver on the island of Lian Yu.

In the context of “Crisis,” Batwoman showrunner Caroline Dries told reporters that Oliver’s death will impact everyone differently. “The leads [of the various shows] all have a different take on how to grieve or handle Oliver’s death,” she said. “Some believe it’s over, and some of them believe that ‘we can fix this.’ Some of them are not wanting to even think about it so there’s everyone has a different approach to it and that helps generate the story for the episodes.”

Added Arrow showrunner Beth Schwartz: “You get to see all the leads of these different shows all grieve together in a really compelling way.”

Whatever Oliver’s fate might ultimately be, the fact is that Arrow is ending this season, and after its contribution to the crossover event — “Crisis on Infinite Earths, Part 4” is officially an Arrow episode — there are only two more installments left.

This, according to Schwartz, meant that when all the Arrow-verse writers were working to establish what would happen in the crossover, it was with the knowledge that it would “change literally everything” for the final episodes of the show.

The producers were tight-lipped on what Oliver’s seeming death during Sunday’s Supergirl episode actually meant for the Arrow‘s legacy, but as Legends of Tomorrow executive producer Keto Shimizu said, what mattered was that because of how big an event “Crisis” would be for all of their shows, “it needed to feel emotionally significant for everybody.”

“You can have all these incredible cameos from all these fun, different versions of the DC characters that we know and love,” Shimizu said. “But at the core of it, we really wanted to keep track of the main characters from all of our shows and have them go through something really incredibly significant.

“I think that honestly is what grounds it and makes this crisis important,” she continued. “On a very deep, heart level, you feel for these characters as they’re going through this amazing adventure together and it brings them all closer together. Which I think, in terms of the relationship that all these shows have with one another, is the definition of epic.”

“Crisis on Infinite Earths” continues with Part 2, on Monday at 8 p.m. ET/PT during The CW’s Batwoman.