Skip to main content
April 2, 2017 7:00pm
Logo text
HBO’s Big Little Lies ended on Sunday (April 2) night and perhaps we should begin by addressing the pachyderm in the room.
My partner-in-reviewing-crime Tim Goodman was NOT a fan of Big Little Lies. His review questioned its realism, its dramatic stakes, its mystery structure and its lack of subtlety.
Having now completed the seven-episode miniseries, I can accept many of the flaws that Tim saw and I can acknowledge them with an enthusiastic, “Sure, but…”
Big Little Lies was absolutely the most Rich White People Problems of Rich White People Problems shows. Sure, but… Behind every impediment and all the sadness lurking in these swanky coastal mansions was a core issue that offered something more universal to discuss or experience.
Not everybody’s freshly leased apartment to escape a psychotic spouse is going to be an airy pad with floor-to-ceiling windows overlooking the ocean, and not everybody’s marriage counselor is going to have the gravitas of Robin “Calamity Jane” Weigert, but Big Little Lies offered as harrowing a portrait of the scary allure of an abusive relationship as I’ve seen on TV recently. No, Alexander Skarsgard’s Perry was not subtle in his menace, but Nicole Kidman’s performance was filled with doubt and self-hatred and arousal at his extremes. He was easy to fear and, enough of the time, possible to be attracted to. Kidman made her character more than just a free-and-clear victim, always clinging to aspects of Celeste’s strength, letting us root for her to do the right thing, but avoiding making her exclusively pitiable.
Not everybody’s kids get dropped off in fancy new cars at a hippy-dippy elementary school with seemingly endless resources buttressed by major fundraising galas, but I can still recognize that wealthy and disadvantaged parents alike worry if their kids are being victimized inexplicably; worry about their kids making friends; worry about how their decisions are impacting their kids; and worry whether certain undesirable traits might be passed through nature and not nurture.

And even if I can’t relate to being told by the mayor of my town “We can’t have puppets f—ing in Monterey,” it’s less about the puppets f—ing or the potentially wasted production of Broadway smash Avenue Q, and more about anything we’ve invested our time and effort into getting thwarted by puritanical forces outside of our control.
I couldn’t relate directly to much of anything in Big Little Lies, but I could relate conceptually to all of it and every single performance reinforced sympathy, if not always empathy.
And Big Little Lies was really not a great mystery.
Sure, but…
[Finale spoilers coming, obviously.] 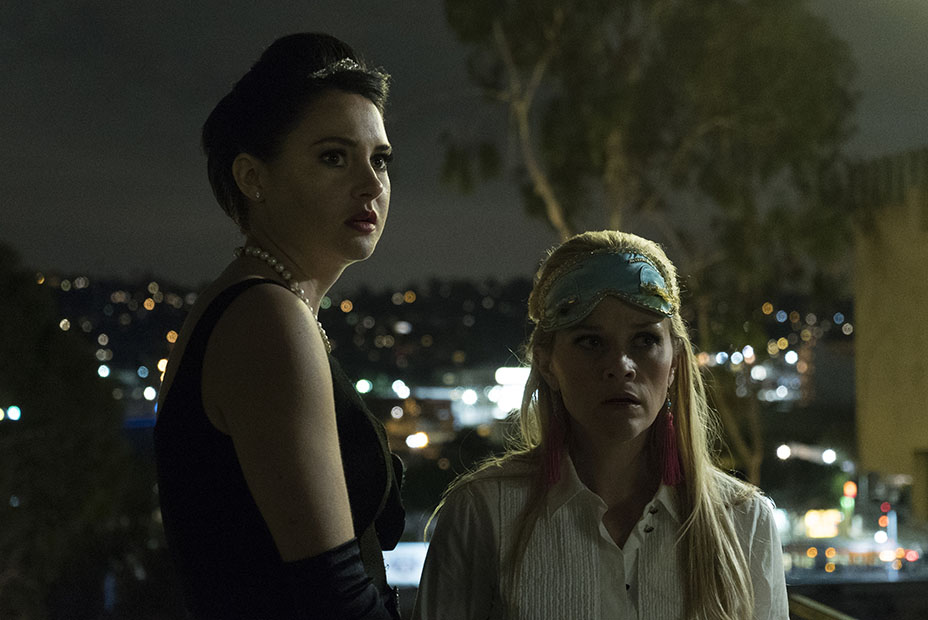 I don’t have a counterpoint to this. We went into Sunday’s finale with basically four open questions:
1) Who was the victim of the murder being investigated by the police?
2) Who was the culprit in said murder?
3) Who was bullying poor Amabella and why were they biting and grabbing her rather than just chiding her for having a fake name?
4) Who was the father of Jane’s (Shailene Woodley) (wrongfully accused) son Ziggy (Iain Armitage)?
I’m neither lying nor being smug when I say that of the four answers provided in the finale, only one was even a slight surprise.
Perry had to be the body because Perry needed to die because Perry was awful. Skarsgard was great at being awful and he was utterly chilling in the finale, especially in his Elvis leather. I saw a couple of stories saying that critics who called Big Little Lies a soap opera were being condescending and I don’t buy that at all. It’s only condescending if you believe soap opera exclusively means, “Not very good and directed exclusively at women.” I’ve never used it that way and Big Little Lies is, to me, absolutely a soap opera or a melodrama in the vein of Douglas Sirk. But Douglas Sirk made great movies, so who is being insulted? I never felt it was a tragedy. In a tragedy, somebody other than Perry dies. In this kind of story, it’s gotta be Perry.
I couldn’t have guessed that Bonnie (Zoë Kravitz) was the “killer,” such as it was. I’ve been told that in the book, Bonnie has a backstory involving her own abusive past. That wasn’t really here. Instead, as the series came to an end, the men and their petty grievances became irrelevant and the women, more sensible, recognized the importance of solidarity over all things. So if Renata (Laura Dern) and Madeline (Reese Witherspoon) and Jane could bury their respective hatchets, why couldn’t Bonnie lend a hand toward this unity? Jane and Celeste both had better reasons to kill Perry, but they probably couldn’t both do it simultaneously, so might as well let a third party join in and keep their hands clean.
I knew without question that Max was Amabella’s tormenter because once Amabella had bite-marks and director Jean-Marc Vallée was drawing attention to Max’s teeth, it was game over. I already had suspicions because the dramatic irony of Ziggy, raised in adorable, violence-free empathy by Jane, getting blamed for a crime committed by his half-brother was just too obvious/delicious.

And once we heard Jane’s story of Ziggy’s conception, complete with teasing flashbacks, I guessed that Perry was Ziggy’s father. This is more about thin writing than anything else. If you make something a mystery, I’m going to look for suspects and if somebody was raped by a seemingly tall, lanky man with a propensity for sexual violence, I’m going to assume you’re pointing my expectations toward the show’s only tall, lanky man with a propensity toward sexual violence — especially once I thought back and realized that Jane and Perry had yet to share a scene. Is Jane’s friendship with Celeste then a big ole coincidence of the sort I don’t really love? Sure. But it’s also a genre convention, or at least a twist made more acceptable with a genre in which such things are commonplace. And do I fully understand what went down with the real Saxon Baker? No. Is that something I might have understood more or better in a book? Probably.
The finale had limited mystery to me, but it still had suspense because Vallée built a threatening mood of tiki torches and Elvis impersonators and people singing eerily arranged Elvis covers. [Or, rather, people singing or lip-synching eerily arranged Elvis covers. I’ve been told that Zoë Kravitz did her own singing, but Adam Scott and James Tupper did not.] Nothing Vallée did was all that subtle, especially when he resorted to cross-cutting between waves beating on the shore and Perry beating on Celeste, but sometimes a lack of subtlety is also a way to build urgency and by the end of the finale, I was very much ready for Perry to get offed.
The show was never subtle, but I don’t expect subtle from Vallée. I expect camerawork of uncomfortable urgency, slightly-on-the-nose editing and performances of sufficient intimacy to compensate for whatever emotions were muted by his other choices.
Performance-wise, Big Little Lies was utterly top-notch across the board.
The showdown between Kidman and Witherspoon for the Emmy best actress trophy might have been intense enough without Jessica Lange and Susan Sarandon from Feud and whichever Fargo actresses are categorized as leads. Kidman had the arc that Emmy voters love, and spent the time in tears, but Witherspoon got to start from a position of viciousness and then gradually let us understand Madeline’s insecurities related to parenting and sex and control. With those two Oscar winners towering above her, Woodley could have gotten lost, but I think her mixture of earthiness, compassion and pushed-to-the-edge intensity would be worthy of recognition as well. It would be more honest for Woodley to go as lead, but it might hurt her awards chances, while also boosting the hopes for the great Laura Dern, who excelled playing a personality type even more tightly wound than Type-A. Dern and Witherspoon also got to be the most darkly funny and Big Little Lies was often most successful to me as a black comedy.
I appreciated that Adam Scott broke my heart several times in the last couple of hours with his love for Madeline and his growing awareness of an estrangement he hadn’t even noticed previously. The shaving of his beard was a huge mistake, but I hope it doesn’t keep him from being in the awards conversation. I thought Tupper and Jeffrey Nordling were good in parts where you weren’t supposed to like them very much. I already mentioned Skarsgard and it’s not surprising that Vampire Eric can play a scary, charismatic dude.
And among an ensemble with a dozen kids, there wasn’t a dud performance, so kudos to casting director David Rubin.
Even when it delivered only real estate porn and superb acting, and I wasn’t invested in the beats of the plot, Big Little Lies kept me watching. By the end, those performances, from big and small names alike, were fueling the drama and my investment.