[This story contains spoilers from season three, episode three of Netflix’s The Crown.]

Among the standout episodes of The Crown‘s third season is “Aberfan,” its depiction of the 1966 Welsh mining disaster that killed 116 children and 28 adults, and its impact on both the monarchy and Queen Elizabeth (Olivia Colman) herself.

After unusually heavy rains, a mountain of waste removed from the coal mines collapsed and slid into the village of Aberfan — hitting a nearby elementary school, killing more than a hundred people.

While her family members — including Prince Philip (Tobias Menzies) and photographer brother-in-law Antony Armstrong-Jones (Ben Daniels) — headed to the small village to show their support, Elizabeth is torn about how to handle the situation. Worried she’d be a distraction, she stayed home — and was roundly criticized for that decision. Ultimately, she arrived for a visit with the surviving families, but the response seemingly turned an invisible tide against the royal institution.

'The Crown' Primer: Everything to Know Before Starting Season 3

It’s a profound tragedy that people in the U.K. might remember, but is certainly not well-known around the world — which makes creator Peter Morgan’s decision to focus on the tragedy all the more interesting.

“I think some people of a certain generation won’t remember, and I imagine there’s lots of people outside of the U.K. who won’t even have heard of this event,” star Tobias Menzies told The Hollywood Reporter. “And what’s interesting is it happened either two weeks before or two weeks after England won the World Cup. Such a well-known event is not articulated, and something that’s much more interesting [is what] he uses to then investigate the Queen’s relationship with emotion and what it is to relate emotionally to her people. That absolutely is central to what the drama is — the events Peter chooses to concentrate on. They’re rarely the ones that you would normally expect.” 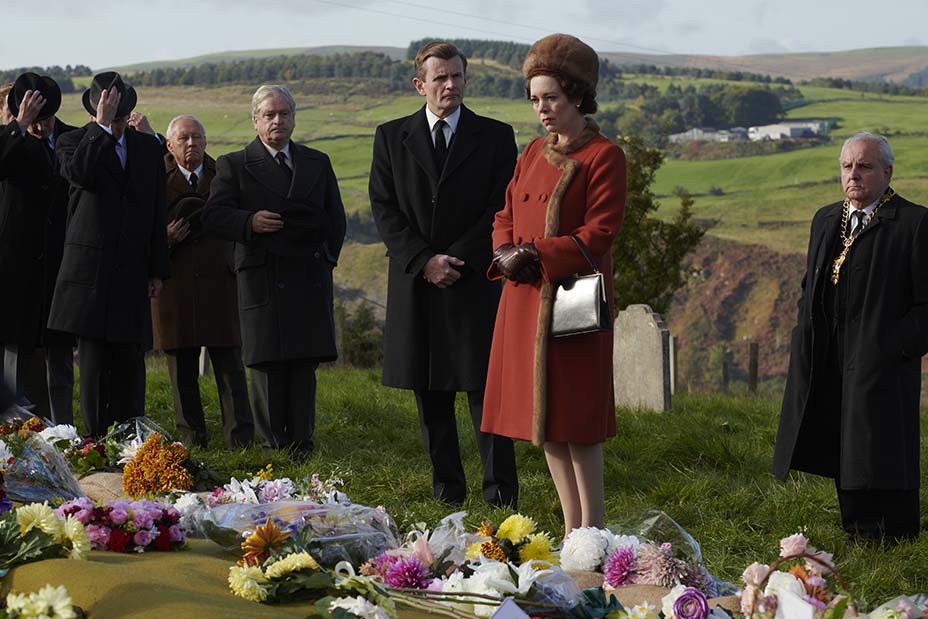 Helena Bonham Carter told THR that after she signed on for the series she was sent a massive document outlining each historical event the season will cover.

“It’s like the briefing I’m sure [the royals] get every time they go out,” the actress said. “We get briefed on all the facts and then we’re told maybe they fudged an event for dramatic purposes, or the timing. It can’t be that inaccurate, but no one was taping these conversations. It’s not documented. It’s not a documentary.”

In crafting their performances, the actors use the well-researched scripts and insights from Morgan, though ultimately they’re putting across what Bonham Carter describes as the “essence” of each character rather than a rigidly historically accurate reenactment.

“They do a lot of the work for you,” said Menzies. “It’s not hard to imagine yourself in it [with] the work that the set designer is doing, the work that the costumers have done. All those teams are so talented and contributing so significantly to the show. Partly what Peter’s doing is putting the human individuals inside these large governmental institutional structures, and seeing what it’s like to be in them.”

That visual language helps tell the larger story, like at Aberfan: How does the Queen deal with such an emotional event, and how would the public want her to react?

The Crown season three is available to stream on Netflix.