[This story contains spoilers from the season three finale of Netflix’s The Crown.]

While Princess Margaret (Helena Bonham Carter) stayed on the sideline for much of The Crown‘s third season, her relationship drama came to a head in the finale of the Netflix critical favorite. With her marriage seemingly irreparably damaged, Margaret overdosed on sleeping pills.

While reporting at the time of Margaret’s death in 2002 hinted at rumors of a suicide attempt, it has never been confirmed in the press. Instead, the royal said she’d taken a handful of drugs because she couldn’t sleep, but her staff were unable to wake her.

“Friends have always denied that it was an attempt at suicide,” according to The Telegraph. “She would later explain: ‘I was so exhausted because of everything that all I wanted to do was sleep … and I did, right through to the following afternoon.'”

Bonham Carter knew that The Crown creator Peter Morgan had done exhaustive research into the matter, since every event depicted in the series has a kernel of truth.

“I didn’t think they would have put it in if there wasn’t enough [proof],” the actress told The Hollywood Reporter. “I think she suffered from real depression, Margaret. I think her friends pretty much confirmed that. She had a total breakdown when her marriage went bust, and I think she took the sleeping pills. I don’t think she particularly was thinking straight. We had a longer version to the scene and that was in, but a lot was cut. What she wanted was the pain to stop because she was in such a dark place. It is shocking to know that, but I think it’s a real admission of vulnerability. People who are that conspicuous are as vulnerable as anybody.”

That vulnerable state allowed Margaret to reconnect with her sister, Queen Elizabeth (Olivia Colman), after strife surrounding her romantic relationships and her duty to the crown. It is a long-overdue moment for the sisters, who were close as children, and one of the most moving scenes of the season comes when they reconnect.

“The Queen found fit to say to her, ‘You are the most important person in my life.’ I found it so moving when Olivia delivered that. That’s all Margaret needed to hear,” said Bonham Carter. “She felt totally rejected by her husband. She felt useless, obsolete, as if she had no role. To be told by her sister, actually you, not her husband or her mother, are the most important person — that’s what she needs to carry on.” 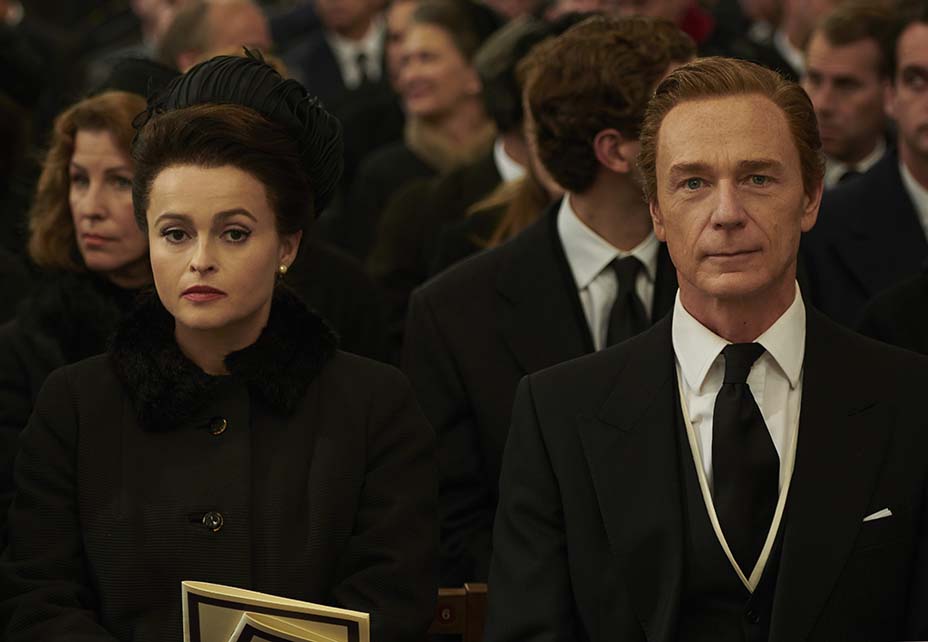 Margaret’s season-long arc “was a great journey,” said the actress. Following her charm offensive in episode two, “Margaretology,” which showcased Margaret’s biggest strengths (her way with people), her biggest weaknesses came into play (her jealousy, her need to be in the spotlight). When combined with the demise of her marriage, Margaret was in a low place.

“She had personal charm and she knew she could seduce. She’s a highly seductive character. So we had to have the high before we had the low,” Bonham Carter said. “They also had huge chemistry, those two [Margaret and her husband]. Huge fun, but they were very competitive and they weren’t a great emotional support, ultimately.”

The relationship between Margaret and her older sister will continue to play out in the drama’s previously announced fourth season, something that was both new and exciting for Bonham Carter.

“I’ve never been on something which has shot for quite so long, but it means we have a real opportunity to get to know our characters and also each other,” she said. “So in some ways we’re better this season [four, which is currently in production] because it’s had time to invest, and we get to know the characters. It’s one of the best-run productions also. It’s seamless. When I start to reflect, I’m so appreciative of the lack of stress and the efficiency of everybody. It’s been a gift, and I’m enjoying every bit.”

The Crown is the actress’ first major TV series, but it’s a medium she’d happily revisit in the future.

“What I love about TV is all the time to develop a character,” explained Bonham Carter. “It’s so character-led, you know? For years we’ve had impoverished characterization for film because you don’t have the time to develop, quite apart from the fact that for most of my life [film] has been men-led. Now we’ve got proper women and women of age on telly. So of course I’d be open to it. It all comes back to the writing, and that’s what makes me give up my life. I go to work, it’s the writing. And you’re only as good as that, frankly.”

The Crown season three is now available on Netflix.

Hear more about the season-three finale of The Crown during Friday’s episode of TV’s Top 5, when series creator Peter Morgan  joins the podcast for a Showrunner Spotlight interview.