[Warning: This story contains spoilers from Sunday’s episode of Curb Your Enthusiasm, “Namaste.”]

When Larry David faced backlash over his recent “controversial” Saturday Night Live monologue, many viewers took to social media in his defense to ask, “Have you ever watched an episode of Curb Your Enthusiasm?” Sunday’s episode of David’s HBO comedy proved that point.

When dealing with a broken thermostat, TV character Larry went into another Holocaust-themed bit with his technician (Will Sasso) upon asking him if he’d prefer to only live with heat or air conditioning. “I have no preference at all, it’s like children,” said Sasso’s character. “OK, so it’s like Sophie’s Choice,” said David, referencing the classic film. “You have two children: Heating and Air Conditioning. You have to pick one, the one you have an affinity for, and the other one goes into the concentration camp. Which one are you going to keep?” Answering the analogy, Sasso’s character decided to keep Heat.

“That was a wonderfully timed accident. If you didn’t like it before? Here it is again!” Curb executive producer Jeff Schaffer tells The Hollywood Reporter of the response to David’s concentration camp bit on NBC’s SNL. “This episode, especially, we’re talking about things that many people are afraid to talk about.”

Even more aptly timed is the introduction of Larry’s new romantic interest, foul-mouthed NBC censor and single mom Bridget, played by Lauren Graham. Below, Schaffer talks to THR about Graham’s role — another “lucky coincidence that one week after he made NBC censors’ lives miserable on Saturday Night Live, we got to see him actually dating one on Curb” — and what’s ahead for the budding pair.

Why did you want to set up Larry with an NBC censor?

Larry’s had a long history with NBC censors. It’s just a lucky coincidence that one week after he made NBC censors’ lives miserable on Saturday Night Live, we got to see him actually dating one on Curb. Larry thought it would be really funny to be dating a censor and to get turned on by all of the foul language that she says “no” to all day. We shot the scene and it was great, but in the editing room we realized that it wasn’t as much about him getting turned on by it as it was a wonderful, romantic moment. So we put the romantic Parisian music under it and made this very sweet moment for Curb. That’s as romantic as we get: Larry falling for someone as she’s talking about pussy.

Is the real Larry David acting out his own funny fantasy by writing Bridget in as an NBC censor, having dealt with many throughout his career?

It’s a very strange, sweet revenge fantasy for all of the censors. Instead of hating them, what if he actually fell for one? I can say without hesitation that Lauren Graham is playing the coolest NBC censor you will ever meet.

How did you go about casting Graham — were there others who tried out for the role?

The character, Bridget, is going to be around for a while and we knew it was going to be a pretty big part for the final half of the season. So it was important for us that Larry had someone who he felt super-comfortable with. But it had to work both ways. He had to be comfortable saying anything in front of her, and we also had to make sure that it was someone who would be comfortable saying all of these foul things, too. We didn’t actually audition this part. We just talked about who would be great for this, and Larry thought she would be perfect and she was. He can say anything around her and she rolls with it. She was comfortable saying anything on the planet in front of Larry.

What about Graham did David think would work, and what was it like when they shot their scenes?

Lauren and Larry have an effortless connection. She walked in and it felt like they had been dating for a long time, it was so easy. The very first scene of her story was the first time she was on set, and she had to say the filthiest things on the planet. She was laughing and saying, “Oh, my dad was going to be so happy that I was on Curb.” Larry knew her a little bit socially and just got the great vibe that Lauren gives off. She is an incredibly giving and receptive actress and a great listener, so it’s very easy for him to improv with her.

Why did you want to give Larry a romantic interest, someone that he can actually stand, at this point?

Bridget is attracted to the fatwa, so Salman Rushdie was once again right. Larry is still surrounded in the sexy pixie dust of the fatwa and there are beautiful women who are attracted to that. So that’s working great for Larry. But she has this kid, and that’s an issue. It’s like that old analogy about Hollywood — that people come to Hollywood and Hollywood presents you with this beautiful plate of food and there’s just a little piece of poo on the plate. And everyone says, “Eh, I’ll eat around it.” So Larry is going to be eating around the kid at the moment. He really likes Bridget and he’s just going to have to deal with this kid. But he’s quite sure that this kid does not have Asperger’s. He, in fact, just think that the kid just has Asshole-perger’s.

What does this mean for Larry and Cheryl David (Cheryl Hines) — is there no future for them?

Hasn’t Cheryl suffered enough? Can’t she be happy with Ted Danson? Cheryl is always going to be in Larry’s life and Larry, sadly, is always going to be in Cheryl’s life. They’re always going to have to deal with each other but right now, Larry is trying to find happiness with someone else. When we see them next week, Larry is still going to be very into Bridget and very not into her son. There are a few more episodes to go and Larry is now seeing someone who is excited about the fatwa, so the fatwa has been working pretty well for him recently. But it will come roaring back in the final episodes.

Is Larry using Asperger’s the worst excuse he has pulled out of his pocket to try to justify his behavior?

At the heart of this episode is L.A.’s Westside guilt in action. Larry feels terrible admitting the worst thing you can say — “He didn’t sound black over the phone” — which predisposes so many uncomfortable things: Do black people sound different than white people? Do Jewish people sound different than non-Jewish people? Those are issues that people are very uncomfortable talking about, so of course we wanted to talk about them. This show will offend the people who are trying their hardest not to offend people — that’s what we do. It’s a bodily function for us. While political sensitivity to everything has been gaining gravity across the country, I think the Westside of L.A. is the black hole of sensitivity, the hell’s mouth of hypersensitivity. We wanted Larry to hit that head-on. There are so many labels for every kind of behavior now and maybe, just maybe, this kid wears no other label than “asshole.” Sometimes, people are just assholes. 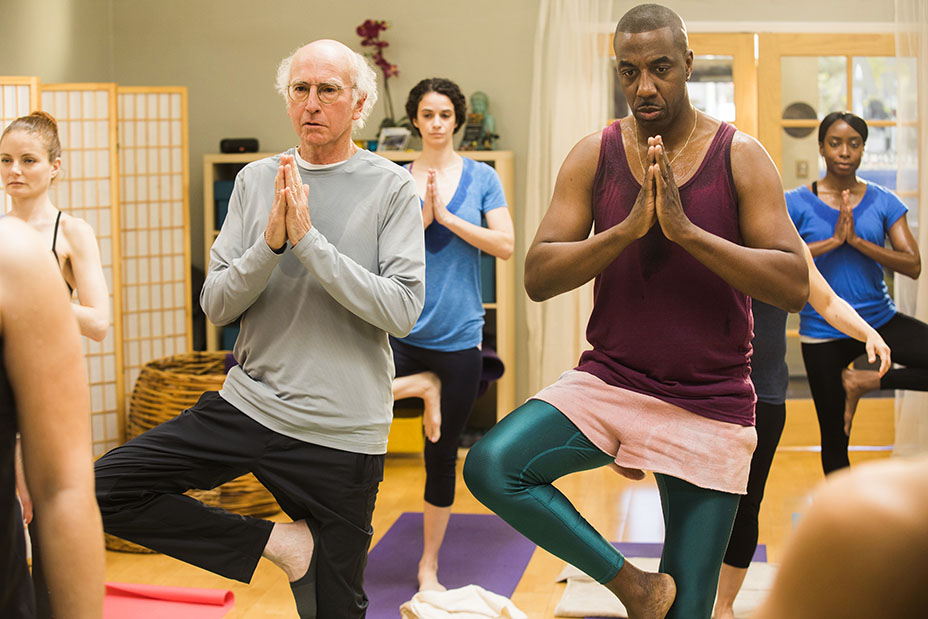 A trend this season has been that Larry gets banished from everywhere he goes. This episode, it was yoga, the bus, Uber, Susie Greene’s (Susie Essman) boudoir and almost a body shop. Do you try to come up with surprising places for Larry to get thrown out of?

One of the first premises of this show was Larry not saying, “Namaste.” We never thought, “Oh, let’s make sure he gets kicked out of yoga.” It’s just that as that argument progressed, it seemed like there was no way he was going to come back for another class. Larry was in a lot of places this week that he usually isn’t frequenting. Real Larry has taken many Ubers, I can’t speak to how many UberXs he’s taken, however. There was also a lot more that we filmed of Larry on the bus, the art of the delicate transfer and him being a clueless passenger. We had Larry being asked why he was taking the bus and saying, “It’s a long story, but suffice it to say, a woman was involved,” and everyone else going, “Oh, yeah, we’ve been there.”

Larry and Susie have long provided fan-favorite scenes, and this season their relationship seems to continue to evolve. Is a bigger plotline coming up with those two?

Larry and Susie are very good friends that don’t like each other much, a lot of the time. I think if everyone looks inward, they will find that with a lot of their friends. They’re just yelling their displeasure, whereas most of us swallow it. There are some Susie surprises coming later in the season for sure, maybe a side of her that you wouldn’t expect.

David returned to SNL on Saturday to poke fun at himself over last weekend’s monologue. Did you talk to him about doing that?

They asked him to come on and he was happy to. I think it was great that he was able to go back as Bernie Sanders and actually make fun of the entire thing from the week before — because it’s such a non-issue. And by the way, those people who were upset about concentration camp lines on SNL got treated to a whole bunch of concentration camp lines on Curb this week. I guess it just worked out that way. We edited this episode pretty early on, so I had actually forgotten about it and when I was watching the show again, I was just laughing. I forgot how funny that scene was — Sophie’s Choice between heating and cooling.

Which scene in this episode made David break up the most?

The UberX scene may be up there for the most Larry has laughed in a scene. The actor, Gregory Tuculescu, is American and has no accent, but his father is from Romania, so he just slips into it. That scene took about three times as long as it should have to film because Larry could not stop laughing. There was also a lot more that we had to cut of Larry and Leon [J.B. Smoove] doing yoga. Like Leon explaining to Larry what Shavasana meant — that it was Pig Latin for, “Meet me in a hotel room and get on top of me.”

'SNL' Has Special Message From DNC: "We're Back"

What did you think of the episode? Tell THR in the comments below and check back in with Live Feed for weekly chats with Schaffer as Curb Your Enthusiasm airs Sundays at 10 p.m. ET/PT on HBO.