[Warning: This story contains spoilers from the season nine premiere of Curb Your Enthusiasm, “Foisted.”]

Curb Your Enthusiasm is about finding the funny in subject matters most others wouldn’t dream of touching. After Sunday’s long-awaited season nine premiere, consider that mission accomplished.

Larry David returned as TV alter ego Larry David and in one jam-packed episode, the HBO comedy caught viewers up on what Larry has been doing for the past six years since he’s been away, while launching him into uncharted territory for the remainder of the season: Larry David is now a wanted man.

Curb aired its last episode in 2011. The season eight finale saw Larry and pal Leon Black (J.B. Smoove) taking their shtick to the streets of Paris, a move Larry initiated to avoid an invitation to Michael J. Fox’s charity event. Sunday’s premiere filled in that missing time, as Larry has been working on a Broadway musical during the six-year hiatus. Inspired by the story of novelist Salman Rushdie and The Satanic Verses controversy, Larry drops his script titled “Fatwa! The Musical!” with manager Jeff Greene (Jeff Garlin). When promoting the play on Jimmy Kimmel Live!, however, Larry’s impression of Iran’s Ayatollah ends up backfiring when the Muslim cleric issues an actual death sentence, delivering the Islamic religious ruling and calling for the Seinfeld creator’s head. The controversy sends all potential “Fatwa!” investors running, leaving Larry back in Los Angeles without an impending play and with the edict following him around.

“The idea that Larry gets a fatwa is perfect,” executive producer Jeff Schaffer tells The Hollywood Reporter about the season-setting idea. “It permeates the entire season, but not in ways you’d expect. But even knowing the surprise of the first show, you are never going to expect where the season ends.”

In short, the fatwa is not a one-episode gag. In fact, Schaffer says the idea inspired enough of a story arc that when they came up with it in the writers room last year, Schaffer knew it would clinch the official and long-awaited return of the always second-guessing David. HBO announced the show was returning shortly after. Schaffer, who is back to executive produce the season alongside David and Garlin, says the unpredictable and supersized 10 episodes end in a way that has the potential to set up a tenth run.

The premiere episode also saw Larry foisting his inept but disabled assistant (Carrie Brownstein) onto Susie Greene (Susie Essman) after Jimmy Kimmel first foisted her onto Larry, breaking up a lesbian wedding by insisting the bride wasn’t “bridey” enough to be the one wearing the gown and reuniting with many of his old pals, including his ex-wife Cheryl David, who is played by Cheryl Hines.

In a chat below, Schaffer explains why they are so fearlessly not politically correct, teases the surprises in store — including unannounced guest stars — and weighs in on some of the seeds that were planted in the premiere.

'Curb Your Enthusiasm' Boss on Unpredictable New Season: Larry David Was Sitting on a "Gold Mine"

How did you come up with the premiere concept of issuing a fatwa against Larry David?

It was very important for us to address what Larry had been doing in the last five or six years since we last saw him. We kept thinking about what he could have been doing and landed on him working on something. The idea of Larry writing a musical called Fatwa seemed funny, and then the idea of Larry getting a fatwa for writing a musical about a fatwa seemed really funny. Once we had that, I knew we were coming back. We had a season arc and I saw where it could go. Larry still didn’t know we were coming back [when we were working on the season]. We had outlined six or seven episodes before it was like, “Are we going to tell HBO we’re doing this, or not?” The back end of the season ends in a way that you would never know going from where we started.

The fatwa keeps him in L.A. because it ruins the play. How does it set up the rest of the season and will the fatwa continue to hang over his head?

The fatwa doesn’t just go away. Once Ayatollahs give one, it kind of sticks! So Larry has to deal with being a wanted man. We see how that impacts his social life, his friends. It permeates the entire season, but not in ways you’d expect.

At the season nine premiere event, you screened the first episode and the fifth episode, because the fifth is a standalone that you said doesn’t give away any more of the season arc. Why are there non-related episodes in the middle?

There are real reasons for why Larry is normal in [the fifth episode], which is why we screened it during the premiere. We wanted to show you what the season was about, but we didn’t want to tell you any more about what is going to happen. Lots of stuff happens between the first and fifth episode that makes the fifth episode make sense. Right now, we look schizophrenic by saying it is a big deal and then in five, it’s not a big deal. But once you see the other ones, you will understand. That’s not the end of it. It permeates the entire arc of the season.

When Curb aired years ago, it was a much less politically correct world that didn’t have social media. In the premiere alone, Larry is antagonizing the Islamic community, lesbians, his disabled assistant with a history of molestation and he also questions PTSD. Are you worried about how people might react and was that something you spoke about when making the season?

I can honestly say, and I speak with full confidence and I speak for Larry also, he has never once taken the audience into consideration. Not once, not ever. We are just working on a show that we think is funny, and that’s that. Larry is still great at finding things that he feels are universal and relatable, and these tiny minutiae things. It’s either one side or the other. It’s, “Oh my god! I know someone who did that to me!” Or, “Oh, I’m so happy Larry is saying that. That happened to me.” So he gets to play both sides of that. Larry’s genius is that he knows innately when to really step on the gas and when to throttle up and down on a subject and how to hit it.

Have you ever said, “That’s too far. We have to dial it back”?

The joke I always say is that we know where the line is — because we can look back and see it. It’s back there in the distance, somewhere over there! No subject is off limits, it’s all how you do it. It’s finding the funny way to do a subject that most people wouldn’t touch. 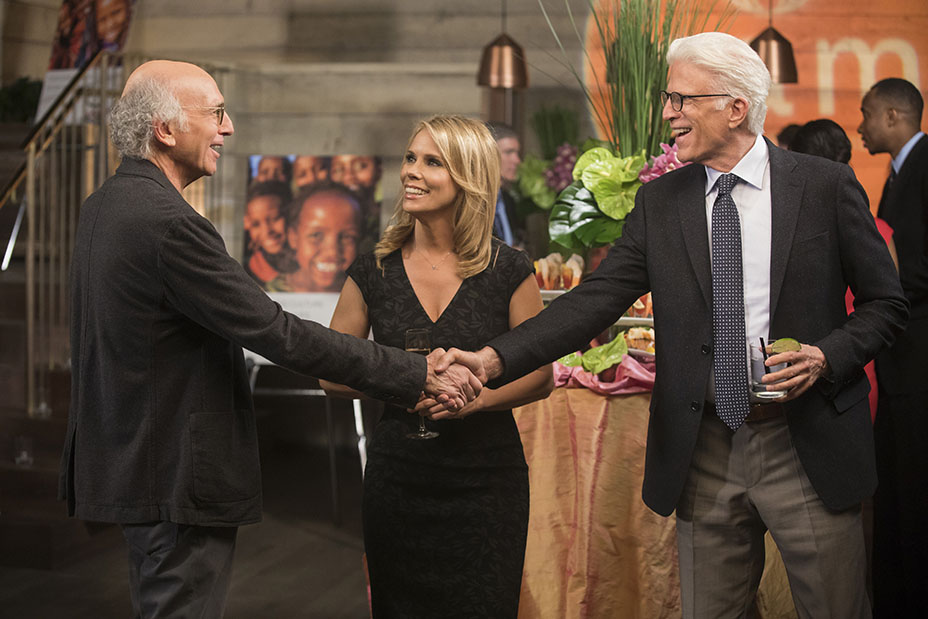 That status of Cheryl and Larry’s relationship is a big burning question heading into the season. We know Lauren Graham is going to enter later in the season as Larry’s love interest and that Cheryl will have a romance of her own. What do Cheryl and Larry look like in 2017?

Ted Danson also returned for the premiere and told Cheryl and Larry that he and wife Mary Steenburgen (they also play loose version of themselves) are separated. Was that a seed you guys were planting for a potential Ted and Cheryl courtship?

The first episode sets up the major story arc for Larry, but there’s a lot in the episode that is setting up a lot of other plot points and stories that are going to be going on throughout the season. There are a lot of things in there that seem innocuous but are really step one of a story that is going to be a story in episodes two, three, four or five. There are a lot of things where you will look back and say, “Oh, that’s where that started.”

In today’s world, keeping the season a secret is also a tougher task. David isn’t even sending out screeners to press. What was he like during the HBO hack?

We spent the last six years making three dummy seasons — so I don’t even know if they got the right ones! (Laughs.) Anyone can put anything on IMDB. I remember seeing something wrong and I just said, “Let it stay up and be wrong. That’s great.” The thing with Larry is that we worked hard to make these surprises be surprising and he doesn’t like people who ruin a surprise party. So that was the biggest thing. It wasn’t about ratings. He just wanted people to enjoy the show the way he wanted them to enjoy the show. But this is also a guy who will run out of a movie with his hands over his ears if there is a trailer for a movie that he wants to see. He takes it to the extreme!

How did you keep the Jimmy Kimmel Live! taping in the premiere a secret?

We filmed it with a closed set and brought in the audience. The audience was actually our crew.

Jimmy Kimmel is just one of the many celebrity guests this season. Are there more that you haven’t announced?

We had a great time with celebrity guests this season. Bryan Cranston does a great job as Larry’s therapist. There’s Lauren Graham, Elizabeth Banks, Nick Offerman and Elizabeth Perkins, who is amazing and plays Marty Funkhouser’s (Bob Einstein) girlfriend who he is in love with and a little afraid of. She and Larry just went at it — amazing. All these great people came into the show, but there are a few very special guest stars that we are not telling anyone about that you are just going to have to watch and see. We needed these very specific people for these very specific reasons and we wrote the episodes never asking if they were available or interested — because we are the dumbest people on the planet. We wisely had no plan B. Through some scheduling back-flips it did work, and it came out even better than I could have thought.

You also directed the premiere. How did you go about setting the vibe for the entire season?

The vibe really comes from Larry and these guys being together for so long. Everyone is so happy to be together. The set of Curb is one of the most fun places on earth because it’s a bunch of really funny people making each other laugh. You just make sure you are covering it. It’s like covering a live-comedy sporting event. You just let them go.

Larry David on Why 'Curb Your Enthusiasm' Hasn't Changed

Tell THR what you thought of Curb Your Enthusiasm and Larry David’s return below. Keep up with Live Feed for weekly show coverage as Curb airs Sundays at 10 p.m. on HBO.