[This story contains major spoilers for the first season of Netflix’s Cursed.]

King Arthur and the Knights of the Round Table are nowhere to be found in Netflix’s Cursed, at least not in their classic incarnations.

Many of those legendary characters populate the streaming service’s violent new fantasy series, from creators Frank Miller and Tom Wheeler, based on their novel of the same name — but in many cases, they are radically reimagined, and in all cases, they take second position to the star of the show: Nimue, the fabled “Lady of the Lake,” played by 13 Reasons Why and Knives Out star Katherine Langford.

With all ten episodes of Cursed season one now available on Netflix, The Hollywood Reporter sat down with Wheeler for a closer look at the series, its origins as a book, and some of the bigger twists along the way.

Final warning: major spoilers lie ahead. Only read further after watching season one. 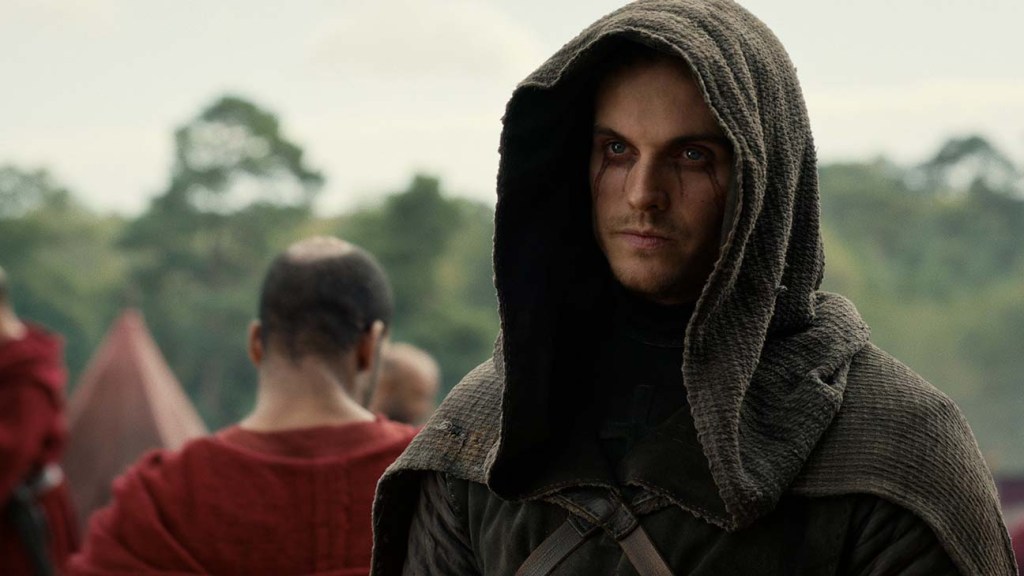 Let’s start with one of the final reveals: the identity of the Weeping Monk (Daniel Sharman), who stands revealed as your version of Lancelot. How did that come together?

Just for context, I’m a lifelong Frank Miller fan. When we were throwing ideas around and worlds around in hopes of a possible collaboration and seeing if there was something to work on, we both just lit up over the idea of the Arthurian mythology. And yet, this had been a heavily mined mythology for a thousand years. So there is an obligation and a sense of duty to bring something new to the table.

But I will say as it relates to the Weeping Monk into Lancelot, one of the really fun and kind of intriguing parts of this for me in working with Frank and almost thinking about Frank’s aesthetic toward these characters, that was one of the things that got me very motivated to write this and for us to do this together. And part of it was like, “What’s a Frank Miller Lancelot like?” I mean, he’s so just deft with darkness and light and just shadow and putting characters in their darkest, deepest, most tortured places. And to us, Lancelot is a tortured character. He’s one of my favorite characters, of course, but he’s so innately conflicted. And in this case, because of the fact that we were focusing the story around Nimue, the Lady of the Lake, we had an opportunity to introduce these characters through her point of view. It’s almost a prequel in some cases to the origin story, the legend that we know.

We suddenly found this freedom to start to throw toys around in the sandbox and try to both present these legendary characters in a new way while staying as truthful as we could to what we thought of their core, because we hold this mythology as very sacred to us both. We grew up with it. I can’t remember a time in my life when I didn’t know about the sword in the stone, or know about Merlin, whether it’s Camelot music my mom would play growing up, or John Boorman’s Excalibur, which is just burned in my brain. So this is definitely holy ground for us, but we wanted to take some radical swings at these characters and give them journeys. They all needed sweeping arcs, because this was an epic we were planning to tell revolving around Nimue and how she influences this legend and impacts these characters.

You mention how this is almost a prequel to the origin story, but there are also ways in which this almost reboots the classic mythology as well, looking at the Lancelot/Weeping Monk as an example. What’s the balance in how much you have to stay faithful to Arthurian legend versus taking bigger creative swings? For example, does this story have to end with Arthur (Devon Terrell) as king and the Sword of Power in his hands?

Well, I don’t want to give away the ending of the entire series!

Sure, but just as a frame of reference.

No, it’s a totally valid question. I would say is this is our way of showing how the Lady of the Lake influenced the legend we know, and I would say what was kind of critical to us was making sure that we were truthful to the interior life of these characters. We knew we were going to be presenting them in very new ways so that we had a distance to travel to get these characters back to their origin point, if that makes sense. So that is the undertaking and that’s the mission. So it is not to utterly scramble all of these things around and see where they fall in kind of new places. It really is to just kind of pull the lens out and see the story starting from further back then we’re used to starting and seeing how this one young woman acted as mentor, leader, really held the sword before King Arthur. 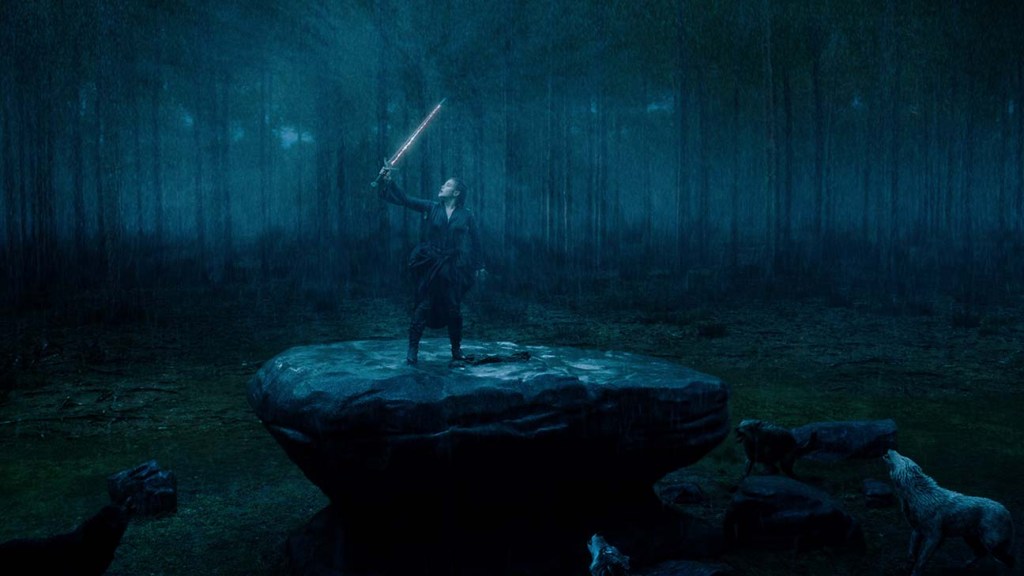 At the start of the season, Nimue comes to possess the Sword of Power. By the end of the season, she’s the Lady of the Lake — at least insofar as she’s been gravely wounded and was last seen falling into a lake!

The inspiration for [Nimue’s story] starts from this really evocative image of this young woman’s hand reaching out of this lake and offering the sword to Arthur, so that image is what captivated us. And it’s a really mysterious, magical, sad image, and it begged all of these questions: Why is she giving the sword to Arthur? What was their relationship? Why him? Why does she have the sword?

The process of unwinding those questions led us to this young woman who is in a world that is magical, but we wanted to present her in this very grounded, relatable way. And I think that was something that really interested us: seeing this world, with all of this beautiful magic and mythology and great characters, but trying to ground these characters a little bit to give them that kind of flesh and blood emotional life — to give Merlin (Gustaf Skarsgård) a richer emotional life — so that they aren’t just icons, they are breathing, flawed, vulnerable characters.

We looked at Nimue as this kind of restless teenager, in this terrible jeopardy with this incredible responsibility that her dying mother gives to her and just see a young woman in the role that we traditionally see the male characters of this mythology in, which is sort of the quest, see her walk in Arthur’s shoes a little bit and put her at the center of all these legendary characters. And in the process, fill out the world of magic a little bit more, define the enemies and also see her make a lot of mistakes, as we all would under these circumstances.

She often surprised me as a character. She would do impulsive things. She was really alive as a character. And of course, Katherine Langford is a phenomenally talented young woman and actor, and she truly brought Nimue to life in all ways. The emotion, we knew about, but we weren’t aware of what a fantastic kind of action hero she would be and how much she would enjoy that process, so that was very exciting to see. 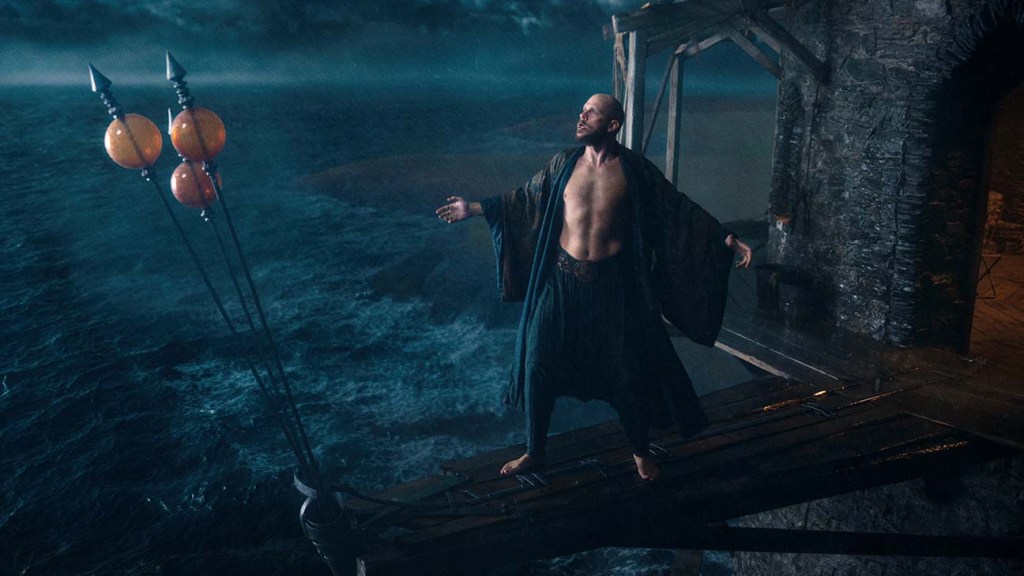 Merlin spends most of the season without his magic, only to regain it in the final moment, after watching what happens to Nimue. What did you want to explore about this legendary character without his most legendary asset: his magic?

It was another early decision we made. We wanted this Merlin to be volatile and passionate. Frank always describes him as “elemental,” which you can take in a number of ways. He controls the elements, but he’s also a wild man. We saw him as a very primal creature, as opposed to the robed and contained version.

I love Gustaf so much. He’s a terrific human being who brought so much commitment and passion to the role. He has this agelessness, this sense of the centuries he’s carrying with him, but also this kind of rage. I really wanted to get under his skin, with his connection to Nimue as his daughter. He’s lived for so long. He’s seen so much loss. To see him care for this young woman, to care about his daughter, it really interested me.

Then, of course, we’re saving up to this moment where we didn’t give him magic until then… it scared me. It was a big swing. People want to see Merlin, but Merlin without magic? It was hopefully delivering that final moment, to have people anticipate and fear it. He’s been trying to hand his power off to others because he obviously has a sort of addiction problem within him — but in this final moment, it’s the only thing that’s going to save him. What doors does [the return of Merlin’s magic] open? I’m really itching to find out. 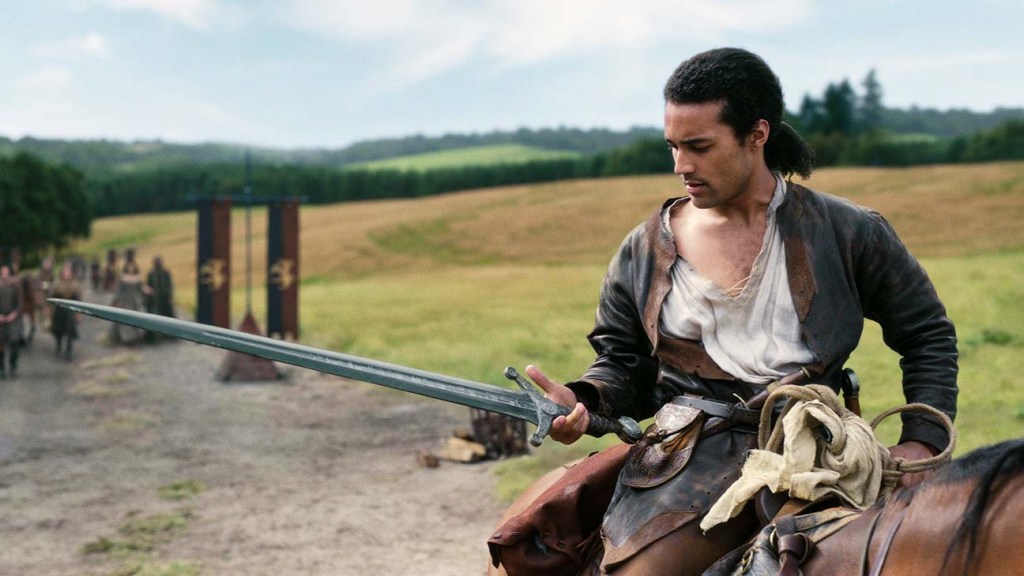 Two of the season’s biggest breakout characters aren’t rooted in Arthurian legend, at least as far as we know: Pym (Lily Newmark) and Sister Iris (Emily Coates), two young women who could not be more opposite from one another.

Lily got the part as soon as she entered the casting room. She was so Pym from the start. Things were confused. She lost her phone. (Laughs.) She was just a whirlwind of funny confusion. By the time she sat down, and before she gave this wonderful reading, we were all feeling very much like, “Okay, Pym is here. She’s arrived.” She’s a cool drink of water in this story of heavy consequences and stakes, in terms of her humor and her approach. She has such great takes. One of my favorite moments of the season is episode eight, when she meets the vikings, and she’s tapped on the shoulder and lets out this incredible squeak. I don’t know how she managed that sound. It was a very Pym-like moment. Lily brought all of these incredible moments to the role.

As for Emily, she was so chilling, even in rehearsals when she was in character. You would see big, burly camera guys backing away from her, because of this wonderful aura she brought, this great sense of menace coming from a place of deep, deep conviction. She made that part her own. It’s clearly a very important part, as we saw at the end [when she attacks Nimue], and it’s one that’s going to grow.

I would also say this about both of them: as much as Frank and I love exploring these existing Arthurian characters and building out that world, we were always going to include other characters and new characters to build it out: the magical world, and the world of the Fey. There is more of that to come, potentially. And we also know this: some of these characters aren’t always who we think they are.