Before she was on The Bachelor, Dancing With the Stars or her current syndicated talk show Morning Dose, Melissa Rycroft was a Dallas Cowboys cheerleader from 2006 to 2008. The 34-year-old now keeps up with the storied squad by serving as a mentor — or, as she calls it, “the happy face in a sea of serious ones” — on CMT’s long-running series Dallas Cowboys Cheerleaders: Making the Team, which will air its 100th episode Sept. 28. (The show is on track for its most-watched season to date, averaging 1.9 million viewers.)

You didn’t cheer in high school or college. Why did you join the team?

I was going through a really bad breakup right as I was graduating college. I was sitting around at home, and there was a two-hour special about the behind-the-scenes of the auditions, and I went out and thought, “Well, I can do that.” I just wanted to do something for myself, so I signed up. The year I auditioned was season one. I didn’t even realize there was a show until I saw people signing waivers.

What’s the biggest misconception about cheerleaders?

Oh, that’s easy — that they’re stupid and pretty. What I love about this show is that it lets people know that these girls have to be intelligent and articulate to make the cut. Most of them have jobs or are full-time students. One girl [who unsuccessfully tried out] this season didn’t know who Sean Spicer was. Another wasn’t sure how many yards are on the field. Kelli Finglass, director of the team, says, “You can’t fix stupid.” How can you trust somebody out there with the press if they can’t complete a sentence? 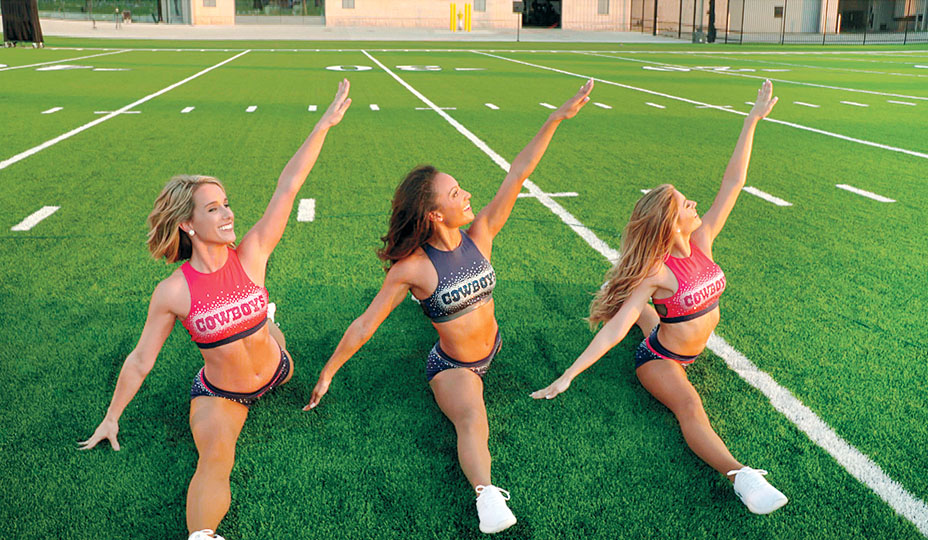 Raising a family in Dallas, how do you feel about your own kids potentially getting involved in football or cheerleading?

My husband can’t wait for the day the two boys are old enough to play football. I’d prefer they go out for soccer or baseball. Football scares me. My daughter is 6, and this is the first year I’ve noticed she really understands what I did [when I was a cheerleader]. She’ll go through my box of Dallas cheerleading stuff, and she loves it. I could be creating a monster, but I’m not going to be a hypocrite about it.

Do you keep up with The Bachelor?

I took a bit of a Bachelor hiatus for a few seasons, but I’m back on. It’s so cuckoo. How can you not? It keeps reinventing itself. I co-hosted Bachelor Pad years ago, so I’ve seen the other side — how all the strings work, which was eye-opening. I now watch knowing how moments are produced. My husband and I watch with a very cynical eye.

What’s your take on the trend of Bachelor castmembers making careers out of paid posts on Instagram?

I’m so glad I didn’t have social media when I was going through it. A lot of people go on the show now in hopes of staying long enough to build a social media following of a couple hundred thousand, and you can sell vitamins and [weight loss] tea and get an income that way. Whatever works. You can’t knock ’em for taking advantage of it.

Sarah Shahi
The Fairly Legal and Person of Interest actress, 37, got her start cheering during the 1999-2000 season.

Jill Marie Jones
The Girlfriends star, 42, most recently of Ash vs Evil Dead, cheered for the Cowboys and NBA’s Dallas Mavericks.