Dancing With the Stars returns to ABC Monday for its 24th season, and this time around Mr. T, Olympic gymnast Simone Biles, Glee grad Heather Morris, The Bachelor‘s Nick Viall and more are stepping into the ballroom for the first time.

While most of the ensemble represents the show’s standard mix of actors, reality stars and pro athletes, there is one notable exception with the addition of Morris. Long before she became a household name as Brittany S. Pierce on Fox’s hit musical comedy, Morris was a professional dancer working for Beyonce. She danced backup on The Beyonce Experience world tour, and danced alongside her on Saturday Night Live, the American Music Awards and The Ellen DeGeneres Show, among others.

Season 24 also marks the show’s first since the departure of showrunner Rob Wade. Wade, who had been with DWTS since 2014, was tapped as Fox’s new reality chief in February.

Ahead of the premiere, The Hollywood Reporter spoke with longtime executive producers Joe Sungkur and Ashley Edens to find out what’s in store for the season, whether or not they think Morris has an unfair advantage, the reason behind the lack of Bachelorette stars and their dream contestants.

Following Rob’s exit, when did you know you were going to take over the reins this season?

Ashley Edens: Joe and I have been executive producers with Rob for several seasons. Once Rob’s departure was made official, it was just obvious that we would step into that role.

Will there be any changes to the show this season?

Edens: We want the show to be ever-changing, ever-growing and trying new creatives, but inherently the heart of the show will be the same.

In there anyone in the cast this season that the show has been trying to get over the years?

Joe Sungkur: Mr. T is someone we have wanted for years. Ever since season one, he has been a celebrity that’s been very high up on our list. He’s someone everybody knows, he gives you a warm feeling and someone you’d love to see in this environment and how he would do in the world of ballroom dancing.

How do you think he will do?

Edens: He’s going to be super entertaining. With the nostalgia audience, he’s definitely going to put a smile on everyone’s face.

Sungkur: He’s the person that epitomizes the heart of the show. He’s someone who’s never ballroom danced before and it’s going to be really exciting for the viewers to see him on this journey. He is going to be dancing to the [The A-Team] theme from the ‘80s so that’s going to be a very special performance come Monday. 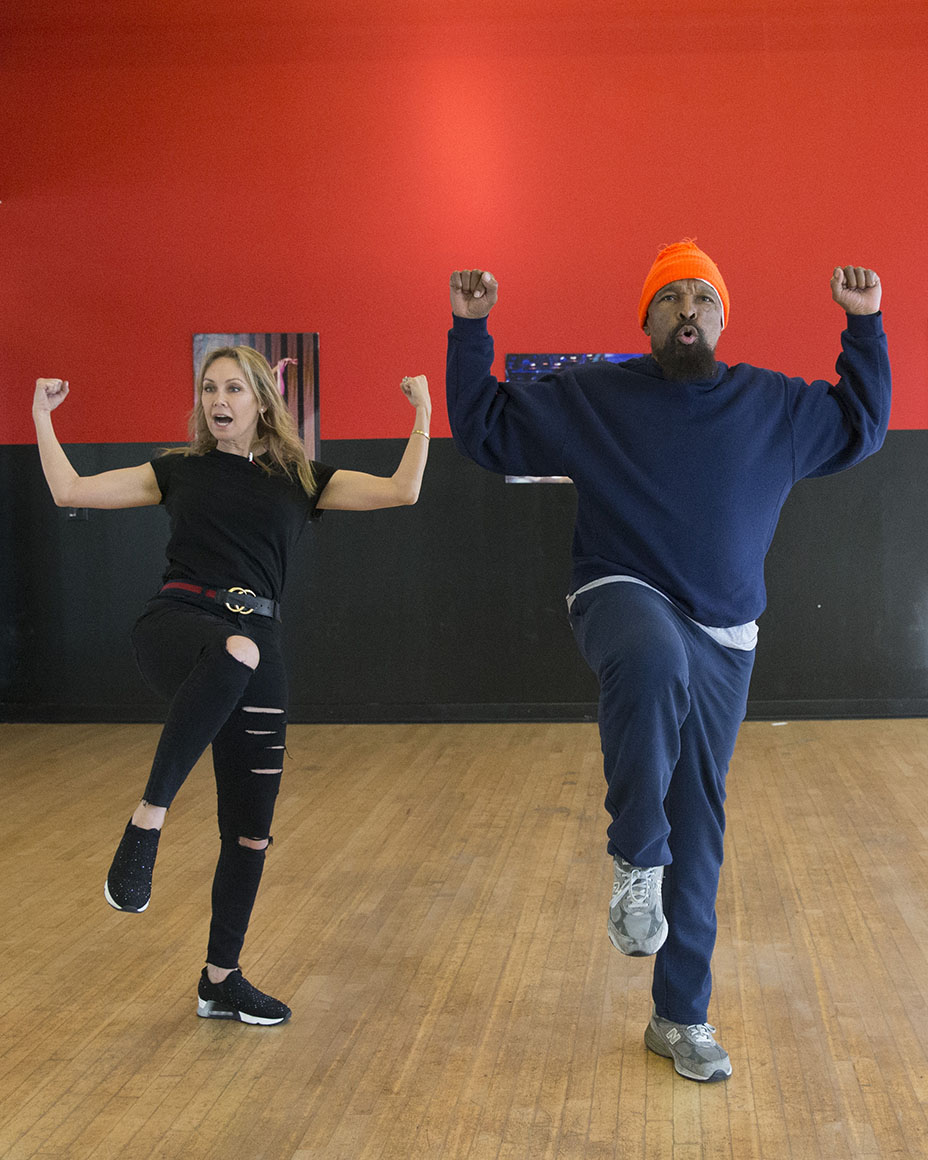 What’s the process like when pairing the stars with the professional dancers? What were the conversations for this season like? How much say do the dancers have in who they dance with?

Eden: There’s no real science or a perfect formula behind the pairing process. The dancers don’t have a say in who they’re getting. Joe, myself and [casting director] Deena [Katz] who books the cast. Deena will know the celebrities a little bit more. Joe and I work with the dancers day in and day out so together we try and make the best pairings based on height, personality [and] dance ability or lack there of. We try not to always put predictable pairings together. You’re not seeing Witney [Carson] with the exact same type person every single season. That’s a challenge. And ultimately we want everyone to be happy whether it’s the celebrity or the dancer. That’s at the forefront in making the strongest pairings.

Sungkur: It’s like we’re matchmakers. We’re constantly looking for new stories. Having the opportunity to partner Keo [Mostepe] with Charo for example felt like a story we’ve never seen before. Throughout the whole casting process we really look forward to that and are trying to make new stories and bring a new dynamic to the show.

You have had Marla Maples on the show. Would you ever consider President Donald Trump’s ex-wife Ivana Trump?

Sungkur: We’re always open to exciting bookings, for sure.

So, you’re not trying to shy away from any future Trump affiliations?

Sungkur: At heart, we’re an entertainment and family show. Politics isn’t something we think about when we’re casting. We want to make this a family show where people can switch off the news and enjoy the show and the entertainment value.

Maksim Chmerkovskiy and Peta Murgatroyd just had a baby and are engaged. How much will their storyline be a part of this season?

Edens: While we will document it, the story is about Peta and Nick, and Maks and Heather. Those are the stories that we have to capture. We have to keep the focus on the couples.

Sungkur: This season is a wonderful season for us because we have so many of our talent that are getting married. Not only do we have Peta and Maks, we have Sasha [Farber] and Emma [Slater], Julianne Hough, Erin [Andrews], and Carrie Anne [Inaba]. It’s wedding season. I’m sure our viewers will be interested in those stories as well as the stories of the couples and their journey in the competition.

Would you ever have a wedding on the dance floor?

Sungkur: That would be exciting.

Edens: Peta and Maks are well into the planning of their marriage Maks and Peta style.

How will Fifth Harmony’s tour schedule impact Normani Kordei’s rehearsals for the show?

Edens: She has an insane schedule for the first three weeks of the show. She’s flying back and forth from Asia and obviously Val Chmerkovskiy will be going back and forth with her as well. In terms of how it will affect her, we’ll have to wait and see how she can withstand the pressure, the time change, their rehearsal time will be limited due to how they’re losing a day each way. But Normani is great and Val’s a great teacher. If anybody could handle this, it’s the two of them.

Sungkur: It just shows how committed she is to the competition that she’s combining her tour with Dancing With the Stars. The first few weeks are going to be particularly hectic for her, but after that it’s going to settle down.

Edens: Val just came off last season with Laurie [Hernandez] where they were in a different city and state almost every day. Val has accepted that that’s part of the job.

Sungkur: He’s excited about getting to travel to the Far East as well. 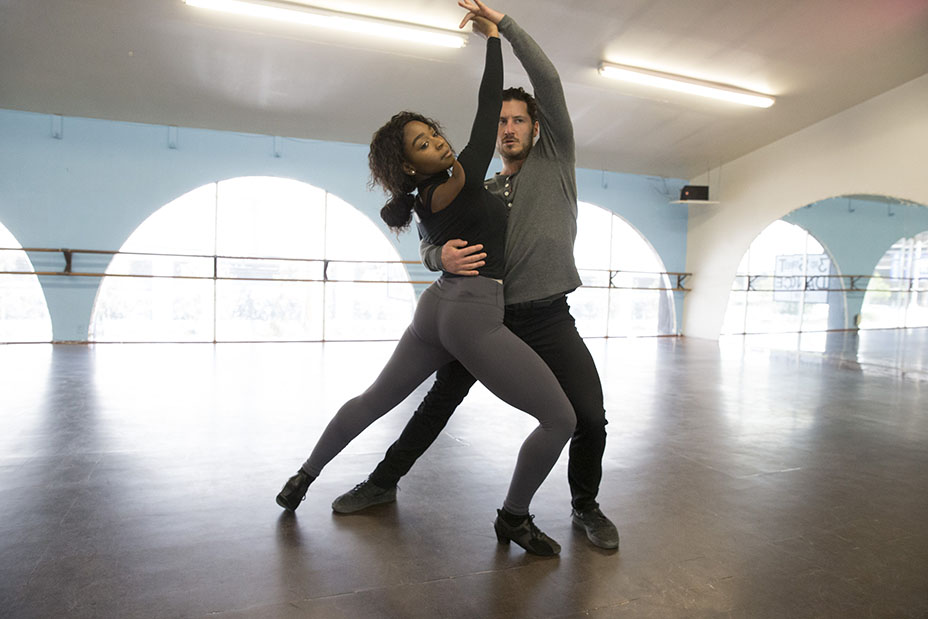 Who are some of the early frontrunners this season?

Sungkur: There are some obvious people that have dance experience that you would look at in the beginning, but often as you’ve seen in the show, the person with the best dance experience doesn’t necessarily win.

Heather is a professional dancer, so does she have an unfair advantage?

Edens: No. We looked at that a lot. Does she have an advantage? Yeah. Is it unfair? No. She has never had a ballroom lesson. She’s never partner danced. That is a skill in and of itself. Does she know how to count music and have rhythm? Yes. But the expectation because she’s a dancer is going to be very different than someone like Rashad Jennings, who is an athlete coming into this. But Heather is finding it challenging because it’s like learning a new language. It’s foreign to her. She has not ever partner danced. It will be interesting to see the dynamic between she and Maks.

Do you have anything else to say to fans of the show on social media who are saying it’s an unfair advantage?

Edens: We’re not shying away from the fact that she 100 percent has dance experience. Because of that, she will be judged on a higher level and there will be higher expectations on her.

Sungkur: In the past, we’ve had people like Zendaya and Corbin Bleu and people said they had an unfair advantage, but they didn’t end up winning the show.

Former Bachelorette star Kaitlyn Bristowe spoke out recently about almost doing the show, but claimed Bachelor creator Mike Fleiss wouldn’t allow her to compete. Nick Viall is going to be on this season. There have been four Bachelor leads on the show and there has only been one Bachelorette and she was on the very first season. Why haven’t the Bachelorette leads gone on to do the show after their season?

Can you see why the fact that there have been more Bachelors on the show than Bachelorettes is troubling to viewers?

Edens: We had Trista [Sutter]. [It’s] based on when we’re casting and the whole cast we’re pulling in and what other reality stars we already have in place.

Sungkur: Who knows what could happen in the future.

What can you tease about what fans can expect in the premiere?

Sungkur: We’ve been seeing the performances coming through, and as producers we’re particularly excited. We got something special lined up for all of the baseball fans.

Edens: We’re doing a massive opening number that’s very ambitious from a creative and technical standpoint. We’re never just trying to repeat what we’ve done in the past.

Sungkur: With the cast this season, one thing that’s very apparent is we’ve got some hilarious contestants like Chris Kattan and Charo. Not only is this season going to have amazing dancers, but we’ve got some brilliant personalities.

Who is your dream contestant?

Have you ever reached out to them about doing the show?

Edens: We’re always talking to people about whether it’s the current season we’re in or future seasons. We have a couple of exciting things locked in for the fall.

Dancing With the Stars premieres March 20 at 8 p.m. on ABC.

What are you looking forward to seeing in the premiere? Who will you be rooting for? Do you think Bill Clinton knows how to tango? Sound off in the comments section below and stay tuned to The Live Feed for all things television.