[This story contains major spoilers for the final season of Netflix’s Dark.]

In a time where new genre television content feels rare and must be savored at all costs, one specific rabid fandom has a show to sell you on: Dark, Netflix’s German time travel thriller from creators Baran bo Odar and Jantje Friese.

Describing the premise of the series feels almost impossible. One must watch it. Even after watching it, there is no such thing as a cursory consideration of its events; each and every character who lives in the fictional town of Winden, Germany is greatly impacted by one another, whether it’s because someone is secretly someone else’s time-traveling father or, weirder still, their own time-traveling granddaughter. (Seriously, if someone can please step in and explain the Elisabeth / Charlotte Doppler effect, slide in right here.)

So, in moving forward, let’s assume you have watched all of Dark. Doubtlessly, you have questions on your mind, about the two new worlds introduced in the final season, how the Dark production team put the parallel universe into reality, what Jonas and Martha’s final sacrifice meant, the logic behind the final dinner scene, and most importantly this: is there more to the story? Is the final season truly the final season, or will the cycle continue, as it does ad infinitum within the context of the story? For answers to those questions and more, The Hollywood Reporter turned to Odar and Friese for a closer look at the final season of Dark. 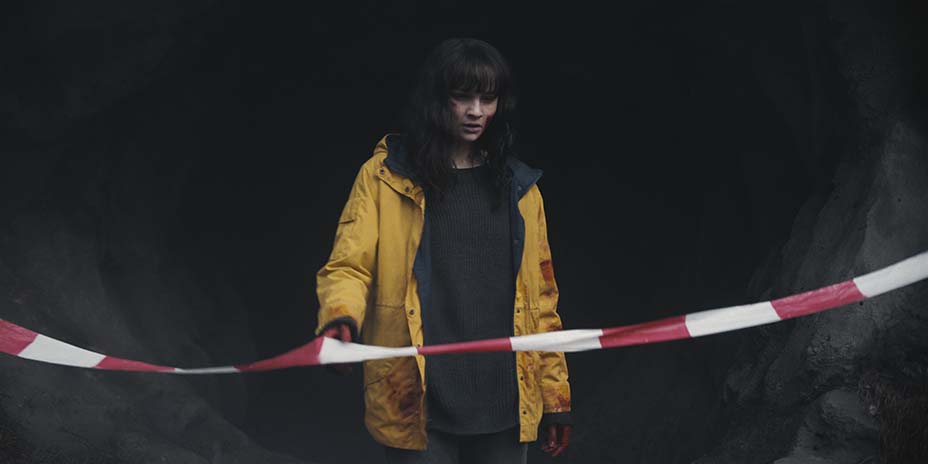 Was it always your intention to introduce multiple worlds from the outset?

Jantje Friese: We wanted to introduce the parallel world in the second season. That was the initial plan. When we got to the second season, we changed it again. We thought it better to shift the puzzle pieces around. There were a lot of [directions] we knew we wanted to go, but didn’t necessarily know at which points in the narration we would address them. As you know with Dark, you don’t have the straightforward narrative where you can go from one thing to the next. We’re going back and forth. That was the biggest structural issue: when do we reveal what? Some of it, we knew. Some of it was something that we developed throughout the process.

Do you wish there were more than three seasons to explore the story?

Friese: It was absolutely the perfect amount. Anything else would have felt like stretching it unnecessarily and making it more complicated on a narrative level. We love symbolism and we believe you have to be true to the symbols you lay out. The triquetra and things coming in three is one of them. It would have felt like selling our souls and not delivering on what we wanted to do [if we had more seasons]. It feels quite right and satisfactory.

What were the biggest challenges in establishing the parallel world?

Baran bo Odar: As we have so many different timelines and characters, we would figure out things like, if we use a certain color in this decade, we won’t use it in another one. It was really challenging for us in the third season to establish another world with maybe even other timelines, too. In talking about a mirror world, though, we wanted to use that trick and actually mirror the images. To mirror the world we know, we could either do that by rebuilding all of the sets. For example, if a stair goes from left to right, in the other world it would go from right to left. If a door was on the left side, it would then be on the right side in the other world. We realized that was insane to do on costs. We already have so many timelines; revamping them for other timelines and then building them for the mirroring? Insane.

How did you pull it off?

Odar: We mirrored the image in the camera. The actors had to act like they are in a mirrored world. If they are right-handed, they had to act with their left-hand, though it would appear as though they are right-handed. I love challenges, and I get bored very easily, even on set. That was a challenge I really loved. It was something to give to the actors. At first, they were like, “Really? We have to do this?” But then they loved it, too. It was such an interesting challenge. Very simple things like opening a door, you have to do it with your left hand. You can try that for a day, and it’s really awkward to do if you’re not left-handed. We had to get cars from England for some shots where the steering wheel had to be on the other side. It was really fun. Sometimes on set, the actors would deliver a really great performance, but they used the wrong hand. They would go, “God damn it! I used the wrong hand!” (Laughs.) That was very fun.

Friese: Some people have already found a lot of the imagery and paintings we used [throughout the series]. The idea of the three worlds is constantly shown in the second season, through the picture in the book young Elisabeth is reading. There’s a picture with three worlds in it. You see Adam blowing wind on the one world, and on the other, you see Eva blowing wind on the other world. Then you have the world of origin in the middle. There are all of these images, and even in dialogue, hints that give it away. But you can only read it once you see how it ends. Once you rewatch it, it’s obviously great fun to find all of those little things. 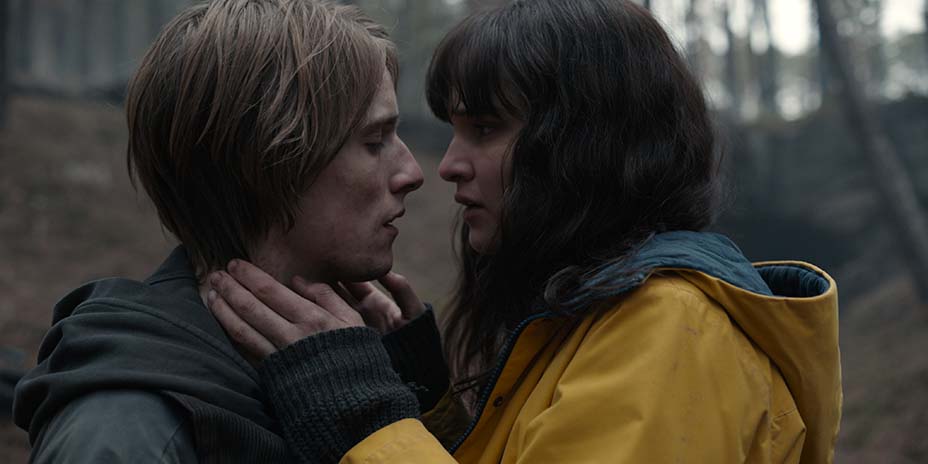 Jonas and Martha sacrifice themselves and their own worlds in order to stop the loop and save the origin world. Do you view it as a happy ending?

Odar: I definitely view it as a happy ending, though you can also interpret it as a suicide mission, of course. I always liked the idea that there are two components who are opponents, fighting each other all of the time, actually having to realize that they are not important. They have to realize that, yes, we suffer and we have pain and desires, but we two are not so important that we must exist so someone else can’t be happy. For me, it’s a very happy ending, realizing it’s not just about you all of the time. You can actually do something good by not being there so someone else can be lucky and happy. It gives this other world a huge chance. I always loved that idea. That’s why, for me, it’s a very happy ending, even though it feels very sad.

Friese: I completely agree. What resonates with a lot of viewers is this feeling that we also sometimes have: do we matter? Can we change anything? Do I actually have free will? How does it feel to be almost in a prison, because you can’t get out of yourself? How can I get over always reacting in the same patterns to certain situations? How do I free myself from my reactions to certain impulses? Letting all of that go, for me, feels very satisfying.

The series ends with a dinner party in the origin world. Was this scene always part of the plan or was it something that developed in the writing?

Hannah reveals she’s thinking about Jonas as a name for her unborn child. Is this a hopeful note in your mind?

Friese: We are big believers in ambivalence. We don’t think there’s only one answer to a thing. That relates to everything. It’s both hopeful and ominous at the same time. In other [projects] we’ve done before, we don’t like to end on a dot. We put a dot, wait a little, and then we put a question mark at the end. It’s just a nice nuance with which to end.

Odar: It’s really up to the audience to answer it. I have an answer, but it’s very personal. You might have an answer, and it’s very personal. That’s the beauty of storytelling. You will have something very personal toward the story. It’s the same with Blade Runner, and how there are still people thinking Harrison Ford is not a replicant; where I’m thinking, “How can you think he’s not a replicant?” That’s the beauty of that story, that there’s a question amrk.

Friese: It’s a good thing because it helps you see who you are yourself. By making this choice and what you read into it, you’re learning something about yourself. 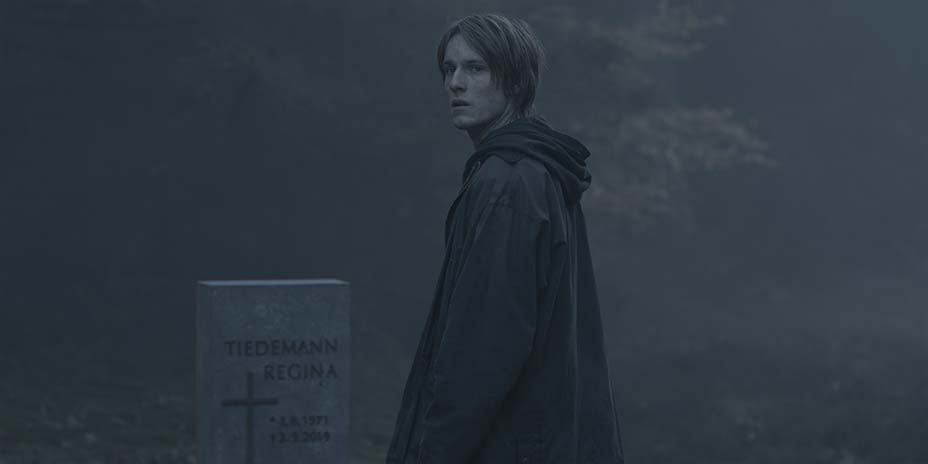 How did Woller lose his eye?

Odar: The question about Woller’s eye is the question about, is there a god or not? That, for us, is a metaphor. You can never give a satisfying answer. You will never know the answer. It’s what we love about this thing. We know people will be going insane about it, but we always knew this would be our answer: we don’t have an answer, because we do not know if there’s a god or not.

Friese: There was supposed to be a scene in season two that got cut out. There are some stories that live on when there are still questions left open. That’s why we decided against showing it.

With that being said, is there still a story to tell in the universe of Dark, or do you feel closed at this point? Do you feel you have said all there is to say about these characters and this world?

Friese: I think there is a lot to tell. I love that there’s so much fan fiction out there. I think it’s great. People write stories about the relationships between Aleksander and Regina, and stuff like that. I think that’s awesome. If you leave enough open for people to pour their own creativity into it… in that way, it lives. But I don’t want to fill those gaps.