Darren Criss has unboxed his wigs for Hedwig and the Angry Inch, a role he played on Broadway last year. On Wednesday night, the Glee breakout begins the production’s run in Los Angeles, as part of its nearly year-long national tour.

“I get to bring Hedwig to cities where I have a lot of family and friends that maybe didn’t have a chance to go see it when it was in New York,” Criss, who shares the stage with Tony winner Lena Hall, tells The Hollywood Reporter. “I’m excited to see how L.A. audiences take it. And it’s a way for me, personally and professionally, to hang the heels up and pass it on to the next person.”

Criss, 29, goes Off Script to talk discouraging Californians from attending tonight’s opening at the Pantages Theatre (running through Nov. 27), crafting election-related jokes and making it through the show with a bit of coconut oil.

How is this version different from the Broadway production?

[On Broadway], I was inheriting four or five people’s different Hedwigs, so we got to do a hard reset. The cool thing about this show is that it shifts and modifies to wherever it goes. There’s this fabulous immediacy and lack of fourth wall-ness to the show that makes the audience feel like what they’re experiencing is for the first and last time, right before their very eyes in that moment. There’s a reason people coming back. It’s a living, breathing thing that makes it endlessly fun to jump into every day.

What’s the toughest thing about traveling with a musical?

Opening nights are a pain in the ass — that’s when everybody goes because they think that’s the time to go. It’s actually the worst time to go because when you’re on tour, we have to figure out that theater. You’re basically watching our second rehearsal there. 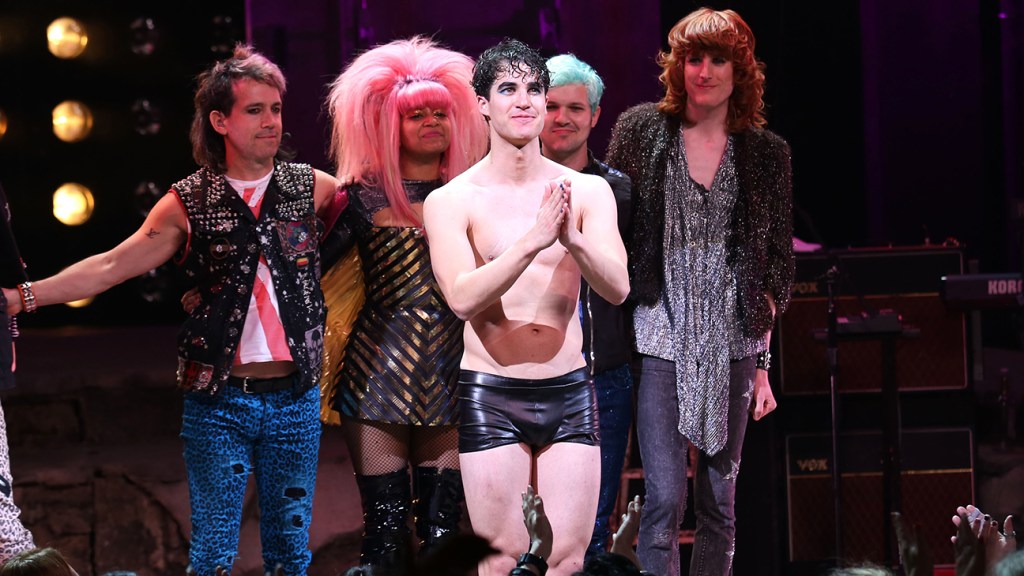 That certainly is a variable that’s fun to be involved in. The Pantages is just ripe with a lot of great Hollywood history, and I would say Hollywood and Los Angeles has a history of its own, so of course, a lot of that will be in there.

Election night is also during the run — any punch lines there?

[Laughs] Luckily, we have a show that lends itself to a bit of satire and a bit of fun, so we take the good, the bad, and the ugly and try to use it to our advantage on stage.

How do you stay in shape on the road?

I’m a big fitness class junkie, especially when I travel. And I like hiking — I realize that’s such an L.A. cliché. People always say, ‘What are you going to do: go to L.A., eat kale and go on a hike?’ Yeah, that sounds awesome. Why is that a negative thing? But Hedwig itself is like an extra workout. I joke that it’s “P90-Hedwig” because if you know the show well, it’s kind of structured like a 90-minute workout.

'Hedwig and the Angry Inch': From Cult Favorite to Broadway Star Parade (Photos)

It’s really more just so I don’t puke onstage. The fun thing about Hedwig is you can really eat anything because you’re just burning everything all the time. But I cut off eating anything by a certain time of day because it’s going to slow Hedwig down. The other day, I went to my friend’s restaurant in San Francisco, Cotogna, and it was so good that I just stuffed my face [a few hours] before my curtain at 8. That was definitely playing with fire.

What do you like to do during the day?

Spending time with friends, as normal and boring as that sounds. And I can very well just stay at home all day, read and hangout and play my piano.

In New York, we had such a fabulous dressing room that all the guys before had gussied up; now it’s just a white room with light bulbs. But I’ve got to have a jar of coconut oil. That’s like my life juice: I’ll just eat a spoonful or two to fuel me up, and it’s good for your skin. It’s the miracle, all-in-one ambrosia.