Netflix’s holiday series Dash & Lily is based on a pair of successful young adult books, but it also boasts a major figure in the young adult world as one of its executive producers: Nick Jonas. It’s the musician and actor’s first project with his production shingle, Image 32, and the lighthearted 30-minute series will also feature a cameo from Jonas as well as a performance from the Jonas Brothers in a later episode.

The YA audience is one that Jonas, who has years of history with his brothers as teen heartthrob musicians-turned-Disney Channel stars, knows well. And while that’s certainly not the main focus of his production company’s slate, it was a logical place to start.

“We’re covering a range of different genres and things that haven’t been announced just yet, but things we’re very excited about,” Jonas told The Hollywood Reporter by phone in late October. “One of the main areas that we were most excited to explore was this YA/new adult space because it’s certainly a group of people that I have been speaking to for quite a while now and have that shorthand with, in a way.”

Jonas and Image 32 joined the project, which was created by showrunner/exec producer Joe Tracz, thanks to his longtime relationship with EP Shawn Levy (Stranger Things) that began when he and his brothers appeared in Night at the Museum: Battle for the Smithsonian. Levy has stayed friendly with the actor-singer since, and brought Jonas into the fold for Dash & Lily.

“Once I knew that Nick had producing aspirations, this felt like an organic collaboration because he’s a fan of the romantic comedy form. He is a true romantic in his heart, and it’s the way he lives his life,” Levy told THR. “He had really strong points of view as a producer and musical tastes and points of view that I felt would benefit the show. So Nick worked alongside Josh Barry and I, who works with me at my company 21 Laps, and everyone contributed to script notes, editing notes, song choices, marketing choices, so it’s been a very organic, ego-free partnership.”

Their partnership wasn’t originally going to include a cameo, but that, too happened organically — in a very rock and roll way. Levy took his daughters to meet Jonas backstage after the Jonas Brothers concert at the Hollywood Bowl last year, and after they all chatted in his dressing room for a while the men decided to write a cameo for Jonas — and a performance by the Jonas Brothers — into the series.

“Nick and I started kicking around what at the time seemed like a crazy idea,” Levy said. “The scripts were written. We were already making the show, and Nick and I were like, ‘Hey, wouldn’t it be fun if we invented this sequence where they go to see you in concert, and then somehow they end up in your dressing room?’ and the whole idea was hatched backstage at the Hollywood Bowl in the middle of production, and then everyone scrambled and made it happen a month later.”

Dash & Lily stars Austin Abrams and Midori Francis as two Manhattan teenagers who embark on a whirlwind holiday romance as they write to each other in a notebook they pass back and forth at locations all across New York City. Filmed in the winter of 2019, the series features the hustle and bustle of the Big Apple during the holiday season — which will look quite different in 2020 thanks to the pandemic.

Below, Jonas discusses his involvement in the series, the kinds of projects he’s been writing and developing with Image 32, and how his busy 2019 turned out to be extra special following the events of 2020.

Why did you decide you wanted to get into producing?

A lot of that started because I started self-generating ideas and IP. These things have not been announced yet but there’s a lot of movement on some projects that I’m incredibly excited about. Knowing that I wanted to get into this side of things, because I’m constantly looking to evolve and grow as a creative person, Shawn was really thrilled to talk about this show specifically as a starting place. And I’m really grateful to him and his team for letting me jump on board and contribute whatever capacity I could, because it really has set the tone for the kind of partners I want to find as I continue to build out my production company and the kind of projects I want to get behind.

What kinds of projects do you want to work on with your company?

Obviously this year has been kind of a whirlwind for everyone and it’s been hard to see silver linings, if there are any at all. But one of the things that happened when lockdown first started is that I suddenly had all this time on my hands to spend on writing, so I popped up my laptop. I’ve had a few years of experience writing but but never really had the time to dig in fully. And so out of that, in this time I’ve written three or four pilot episodes for TV projects, which are moving forward, and kind of half-baked a bunch of really exciting starts for features. The genre is all over the map. I’m a real fan of just telling stories, and of film and television in general. So I love this moment of just being able to create and let the project dictate the path forward and who those potential partners or studios might be. It’s everything from psychological thriller to a romantic comedy to bigger epic love stories. So there’s quite a few different lanes, but I’m really enjoying the process of being able to shift my creativity from just one lane, whether that’s music or acting, and expand that to this new creative horizon.

Do you have visions of yourself starring in some of these projects, or you just want to be behind the scenes creatively?

Well, I think that looking at someone like Mark Wahlberg as an example of the kind of path I’d like to take is probably the right thing — working with great creative partners to kind of bake things out, and then get it to the point where I decide if I want to be in it or not, or or just come on board and produce if I really believe in something and want to see it through. So I think it’ll be a combination of both. And it’s just going to be a case by case basis.

Dash & Lily is based on existing IP. Is that something you’re hoping to do to, or was this just a good way to dip your toe in the water?

That’s certainly something I’m looking at, and have already optioned a few things that I really, really liked and felt like there was a story to tell there. So I think yeah, it’s just a matter of what the right thing is for each project. But with this one particular, I was thrilled when I got the call and the 21 Laps folks sent it to me. Once I heard their vision for it, it was just a no brainer and something that I felt made perfect sense for me to come on board and help in whatever way I could. 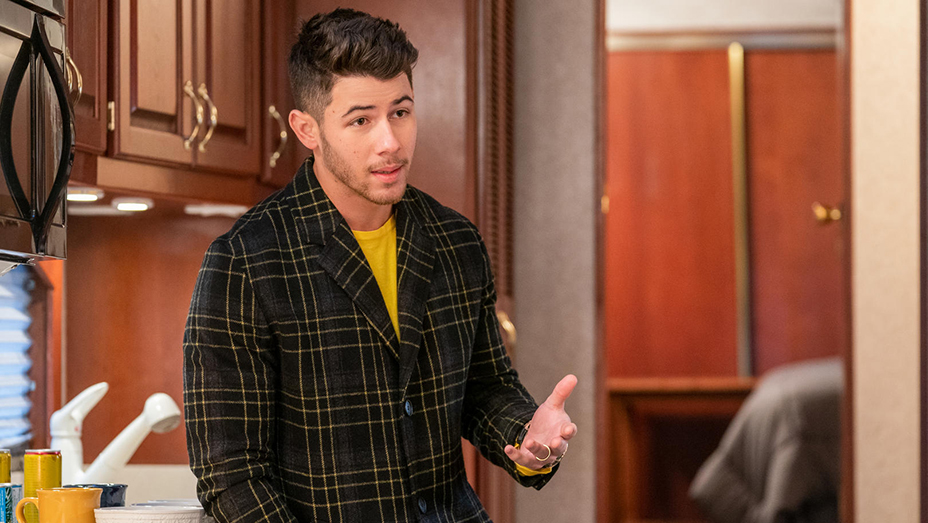 Shawn Levy said that the idea for your cameo was hatched backstage at the Hollywood Bowl.

I think he thought I was kidding at first, or maybe that it was the tequila talking. But I just felt like, Yeah, why not? I mean, I’m a part of it already. So it would make perfect sense to figure out the scheduling and it was actually not an easy thing to accomplish because the tour was already pretty busy. And then to make that happen was a difficult thing from a scheduling perspective. But I think it was a really nice thing to get to do and to have the brothers open up their schedules too throughout the day we were shooting to go and do it meant a lot and I’m glad it all came together.

It was not supposed to be that long. But you know, it’s a good problem to have. We were really grateful, especially, you know, none of us could have known what this year was going to hold. So to be able to go and play I think it was 95 or 96 shows last year was was really, really special and certainly something I don’t take for granted.

Has writing TV and film been your main focus this year, or are you writing music as well?

I feel fortunate to be in a spot where I haven’t really had to pick just one. I’m definitely writing music. I’m always writing music. And I’ve been working on some other things, which, again, I feel bad I can’t speak about yet. But there are a number of things. You’ll see some of those soon enough. But yeah, I’ve stayed very busy and also have been enjoying, after the year we had, some time at home. I’m grateful to have now had time with my wife that I wouldn’t have had otherwise with how busy our lives are, and so that’s definitely a silver lining as well. We’ve been collaborating a lot together in this time, and it’s kind of became a family business in a way.

Is there anything that you’re going to begin production on now that the world is opening up a little bit?

We have a number of things which are in, I would call them early stages of development. So still a little ways out from from starting shooting. But there is one of the projects that is able to be accomplished in a COVID-safe way, which we’re already in production on and there’ll be an announcement about that soon. And when there is Alexis will be the first to fill you in. But yeah, it’s been a really fun moment of just exploring and looking at the limitations and saying, Okay, how can we press forward? And that’s what I’ve been focused on.

Watching Dash & Lily is almost a bit nostalgic knowing that New York definitely won’t look like that this year. Have you thought about that aspect of the show at all?

It’s unbelievable, actually, when you really think about it. We could not have predicted last year that we would be in the situation we’re in and to have this in the can, ready to be launched in a time when obviously content is key and is really needed to be able to fill that slot is really exceptional. Especially with something I think so beautifully represents and romanticizes New York City, a place that looks very different today than it did last year. So I was watching it wishing I could be back in New York in the wintertime and that things would look kind of like they did then. But obviously it looks different. So hopefully this can provide people with some joy and a little bit of nostalgic energy and feelings. I just can’t wait for people to see it.