David L. Lander, who played Andrew “Squiggy” Squiggman for all eight seasons of the popular ABC sitcom Laverne & Shirley, has died. He was 73.

Lander died Friday at Cedars-Sinai Medical Center in Los Angeles of complications from multiple sclerosis, his wife, Kathy Fields, announced. The actor was diagnosed with the disease in May 1984 but kept it a secret for 15 years.

Lander and McKean, who had been doing raunchy comedy in an act known as Lenny & Anthony since they had met as freshmen at Carnegie Tech in Pittsburgh, were hired as writers on Laverne & Shirley after the show sold to ABC in 1976.

Producers realized the pair also could be used in a pinch if the script “ever needed two funny characters to go out and get a bag of sauerkraut,” Laverne & Shirley co-creator Lowell Ganz said in 2011 in a chat for the TV Academy Foundation website The Interviews. “We put them in the very first episode and then put them in every episode. We closed up their writers office, and they were part of the cast.”

On Twitter, McKean posted this picture, with no text:

Laverne & Shirley, of course, revolved around the exploits of the wisecracking Laverne DeFazio (Penny Marshall) and the idealistic Shirley Feeney (Cindy Williams), two romantically challenged brewery workers and roommates in Milwaukee in the late 1950s.

Squiggy and McKean’s Lenny Kosnowski (his last name was Polish for “Help, there’s a hog in my kitchen”) were the knuckleheaded greasers who drove trucks for the brewery and shared the apartment above Laverne and Shirley’s.

“Squiggy is a combination of people I knew and despised. You have more freedom playing people you hate. There are people like them who haven’t outgrown their silly dreams,” Lander told People magazine in 1978. “Squiggy looks in the mirror and thinks he’s the handsomest guy in the world.”

Lander and McKean went on to record Lenny and the Squigtones, a 1979 album from Casablanca Records — featuring Nigel Tufnel (Christopher Guest) of Spinal Tap on guitar — and even market a line of Lenny and Squiggy dolls.

The younger of two sons, David Leonard Landau was born on June 22, 1947, and raised in the Bronx. His parents, Sol and Stella, were teachers.

After graduating from the High School of the Performing Arts in Manhattan, Lander met McKean in 1965 when both were freshmen at Pittsburgh’s Carnegie Tech. Working on their act and too busy to attend classes, they were “not asked to come back” for a second year, as McKean once put it.

Lander moved on to NYU and wrote one-liners for columnists Walter Winchell and Earl Wilson before heading for Hollywood in 1968. Albert Brooks, a Carnegie Tech classmate, put him in touch with Rob Reiner, and they wrote for a 1968 NBC special Romp!!! that featured Steve Allen, Jimmy Durante and Cream.

In 1970, Lander did his best Lewis impersonation for the ABC cartoon Will the Real Jerry Lewis Please Sit Down, then appeared on episodes of Barney Miller, Rhoda and The Bob Newhart Show. Meanwhile, he had reunited with McKean in The Credibility Gap, a comedy troupe that worked in clubs and on the radio. 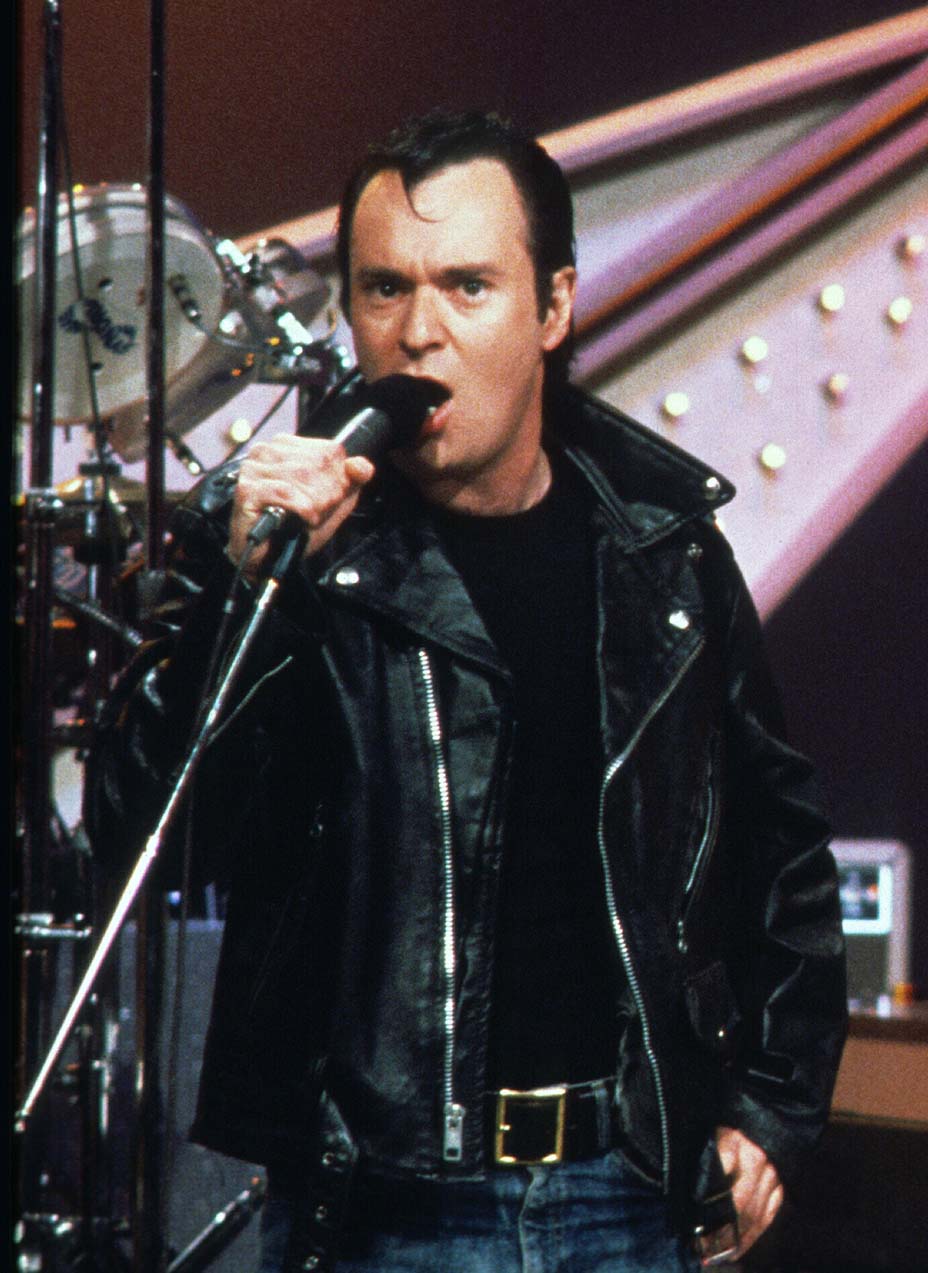 The two were invited to the home of Marshall and then-husband Reiner for a party meant to celebrate the greenlighting of Laverne & Shirley, a spinoff of Happy Days. The actress “had them perform like you would see on The Dick Van Dyke Show when Rob Petrie would go to Alan Brady’s house and people would perform,” Ganz recalled.

“They were really funny, the kind of funny where I had pain in my ears. They were really dirty, as vulgar as you could be. That was part of the comedy, it was sewn in. … Then, your only sense was, ‘Is there any way you could put them on television?'”

“If it’s a fifth as funny as it is this way, it’s still funnier than anything else on TV,” Mark Rothman, who created Laverne & Shirley with Ganz and Garry Marshall, Penny’s brother, recalled answering.

Harry Shearer, who also was in The Credibility Gap, was hired for the writers room along with Lander and McKean, who conveniently put Lenny and Squiggy into the premiere.

At the start of the show’s sixth season, after Laverne and Shirley lose their job as bottle-cappers at the Shotz Brewery, the boys drive them to Burbank, then stick around to open the Squignowski Talent Agency. The series came to an end in 1983.

Lander also appeared in Steven Spielberg’s 1941 (1979), voiced the character of Smart Ass in Zemeckis’ Who Framed Roger Rabbit (1988), played a baseball announcer in Penny Marshall’s A League of Their Own (1992) and showed up as Principal Squiggy in Keenen Ivory Wayans’ Scary Movie (2000).

His résumé included stints on the CBS soap The Bold and the Beautiful and the short-lived Lynch ABC comedy On the Air and voice work in Jimmy Neutron: Boy Genius (2001), 101 Dalmatians: The Series and Teenage Alien Fighters From Beverly Hills.

A fan of the Pittsburgh Pirates since childhood, Lander owned a piece of the Portland Beavers, a onetime Pirates’ minor-league affiliate, and scouted for the Seattle Mariners and Anaheim Angels.

Asked in 2001 why he kept his health problems hidden, Lander said: “I was afraid that too many people didn’t know what MS was, and I wasn’t in a wheelchair, I wasn’t having cognitive problems, so I thought as long as I wasn’t showing, why tell anyone? I just felt they wouldn’t hire me if they knew I had MS.”

In addition to his wife, whom he married in 1979, survivors include daughter Natalie Lander, an actress. (His father-in-law was the late Hollywood agent Freddie Fields.)