DC Universe, the forthcoming SVOD platform, is starting to come into focus.

The $7.99 a month service officially launched Sept. 15 (aka Batman Day) in the U.S. and will be a destination for new scripted originals (both live-action and animated), library content (both films and classic TV series), a curated selection of digital comics, a hub for breaking news in the DC Entertainment world and other fan-focused offerings.

The first scripted original to bow on DC Universe will be Titans, the drama that was announced back in April 2017 along with plans for the larger platform itself. Titans will debut Oct. 12, with episodes released weekly for 12 weeks. The series will have its world premiere Oct. 3 in conjunction with New York Comic-Con.

Here, The Hollywood Reporter has rounded up all the details to know about the platform.

Launch and pricing | DC Universe launched Sept. 15 at 5:59 a.m. PT. Subscriptions cost $7.99 per month or $74.99 per year. Membership includes access to all the content on the platform as well as opportunities to win prizes, earn rewards and connect with others in the community.

Doom Patrol | Due in spring 2019, the live-action series is based on the DC Comics title of the same name. Jeremy Carver (Supernatural) is serving as showrunner on the 13-episode drama and exec produces alongside Berlanti, Johns and Schechter. The drama revolves around superhero outcasts Robotman (Brendan Fraser), Negative Man (Matt Bomer), Elasti-Woman (April Bowlby) and Crazy Jane (Diane Guerrero), who are led by modern-day mad scientists Dr. Niles Caulder (Timothy Dalton) and Cyborg (Joivan Wade). Alan Tudyk rounds out the cast as Mr. Nobody.

Swamp Thing  | The live-action drama based on DC characters created by Len Wein and Bernie Wrightson, the project was picked up to series after a brief time in development. Mark Verheiden (Battlestar Galactica, Daredevil) and Gary Dauberman (It and its forthcoming sequel) are attached to co-write the script and serve as showrunners. James Wan (Aquaman) will exec produce alongside his Atomic Monster banner topper Michael Clear, with the company’s Rob Hackett set as a co-exec producer. Verheiden and Dauberman will also exec produce. The drama follows what happens when CDC researcher Abby Arcane returns to her childhood home of Houma, Louisiana, in order to investigate a deadly swamp-borne virus. There, she develops a surprising bond with scientist Alec Holland — only to have him tragically taken from her. But as powerful forces descend on Houma, intent on exploiting the swamp’s mysterious properties for their own purposes, Abby will discover that the swamp holds mystical secrets, both horrifying and wondrous — and the potential love of her life may not be gone after all. Swamp Thing is due in June 2019.

Young Justice: Outsiders  | The animated series, due in 2019, hails from producers Greg Weisman and Brandon Vietti and serves as the third season of the Young Justice franchise. The first two seasons of Young Justice will be available on DC Universe’s launch day. The series will return in January and again in June.

Harley Quinn | The 26-episode half-hour animated series is due to launch on the service in late 2019. Powerless trio Justin Halpern, Patrick Schumacker and Dean Lorey are behind the show, which is based on characters from the DC Comics universe. Harley Quinn was most recently played by Margot Robbie in the Warner Bros. feature Suicide Squad. Robbie will be asked to voice the DC platform animated series, though it’s unclear if the in-demand actress will do it. The comedy will also feature Poison Ivy and a cast of heroes and villains — old and new — from the DC universe. The series follows Harley as she breaks things off with the Joker and attempts to make it on her own as the criminal “queenpin” of Gotham City. The effort is described as an adult animated action-comedy. (Powerless, for its part, was DC Comics’ first live-action half-hour comedy.) The Big Bang Theory star Kaley Cuoco voices Harley Quinn. The rest of the voice cast includes Lake Bell, Alan Tudyk, Ron Funches, JB Smoove, Jason Alexander, Wanda Sykes, Giancarlo Esposito, Natalie Morales, Jim Rash, Diedrich Bader, Tony Hale and Chris Meloni.

Stargirl | Johns will write and exec produce the 13-episode live-action scripted drama alongside Berlanti and Sarah Schechter. The series is slated to bow in October 2019. Stargirl follows high school sophomore Courtney Whitmore, who inspires an unlikely group of young heroes to stop the villains of the past. Nickelodeon grad Brec Bassinger (Bella and the Bulldogs) will play Stargirl. The project reimagines Stargirl and the very first superhero team, the Justice Society of America, in a fun, exciting and unpredictable series. Johns and Lee Moder created the character, who was named after the former’s sister, Courtney, who died in the 1996 explosion of TWA Flight 800. The character made her first appearance in July 1999’s Stars and S.T.R.I.P.E. #1. Anjelika Washington (Shameless) will co-star as a DC Comics character that is being kept under wraps.

Metropolis | Originally picked up straight to series with a 13-episode order, the drama from Gotham duo John Stephens and Danny Cannon is being redeveloped and on hold. The original pitch for Metropolis was set in the City of Tomorrow before the arrival of Superman and revolved around Lois Lane and Lex Luthor as they investigate the world of fringe science and expose the city’s dark and bizarre secrets. 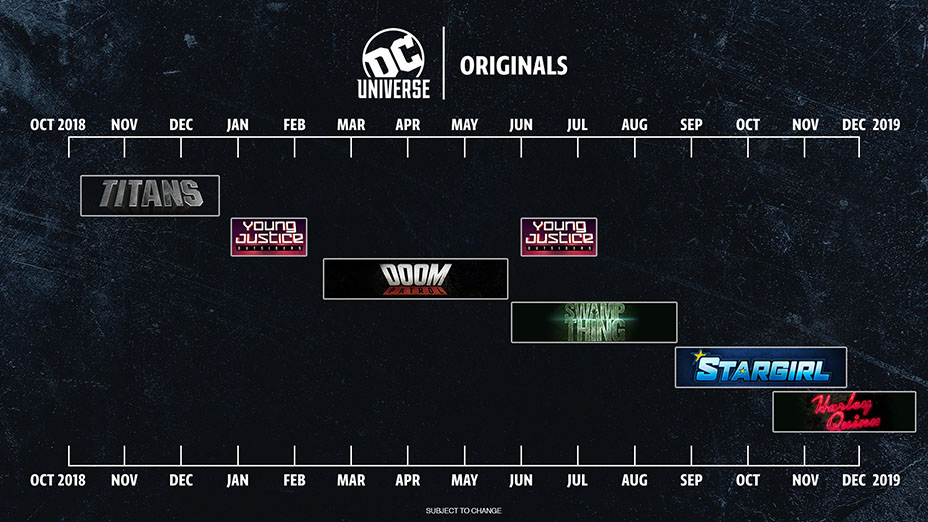 Library TV titles that will be featured on DCU include the original Wonder Woman, the Batman animated series, Superfriends, Birds of Prey, Teen Titans (2003), Lois and Clark: The New Adventures of Superman, Constantine, Batman Beyond, Batman: The Brave and the Bold, Batman: The Animated Series and the Justice League animated series, among others.

Digital comics that will be available through DC Universe include the first appearances of Batman, Superman and Wonder Woman. Other titles included are Batman: Gothic, the Authority series, Green Arrow: Year One, Shazam, The New Teen Titans, Identity Crisis, The Batman Adventures, Jack Kirby’s New Gods and more DC classics.

Bookmark this page as THR will update it as more information is available.