[This story contains spoilers for Netflix’s Dead to Me]

In the pilot for Netflix’s recently launched dark comedy Dead to Me, Jen and Judy, two women struggling with recent loss, meet in a grief support group and become fast friends. During the next nine episodes, their lives are turned upside down as it’s revealed that Judy (Linda Cardellini) was actually the one to kill Jen’s (Christina Applegate) husband in a hit-and-run accident, and has tried to make it right by being Jen’s shoulder to cry on. And in the biggest twist, Jen seemingly shoots Judy’s ex-fiancé Steve (James Marsden) in the season one finale, with the two women overlooking his dead body in the pool as the credits roll.

But, it may not be that simple.

“I’ll just say that you don’t know that she shot him,” creator and showrunner Liz Feldman tells The Hollywood Reporter, hinting there may be more to that final scene than meets the eye. “Netflix will have to order a season two for us all to find out. Just like the rest of the show, it’s not exactly what you think it’s going to be.”

Feldman, a former writer on 2 Broke Girls and The Ellen DeGeneres Show, said the idea of killing Steve was not originally in her plan for the season, but rather it was an idea co-executive producer Abe Sylvia had partway through the writing process.

“When he pitched that, everybody in the room had this moment where we felt like, ‘Oh shit, yeah, that’s going to need to happen,'” she says. “It just made so much sense for what the overarching themes of the season were and it folded so beautifully into that and so darkly into the framework that we were setting up that it just felt like it’s a big swing, let’s take it.”

In the moments leading up to Steve’s death, Jen and Judy are not on good terms. Judy has admitted that she killed Jen’s husband, Ted, with her car, and then attempted to cover it up and become a part of Jen’s life. Jen responded by cutting off their friendship and seems to be reaching a breaking point when Steve enters her backyard looking for Judy and gets aggressive. Judy, at the time that her friend is confronting her ex, is trying to get herself hit by a car as a way to make amends for her actions. Seconds after a driver spares Judy’s life in the same sharp corner where Ted died, she gets a call from Jen to go over to her home, where both stand over Steve’s body submerged in the pool. And while Jen is the one holding the gun and seemingly in shock, viewers never ultimately see her pull the trigger.

After everything they’ve been through together, what’s next for these two women?

“There’s an evening of the score and there’s a rebalancing that will take place and almost, in some ways, a role reversal,” Feldman says for what she has in mind for Jen and Judy in season two. As well as, likely, more death.

“This show will always be a show that explores the dark sides and the light sides of grief, loss, forgiveness and friendship. So suffice to say, there will be more darkness,” she adds.

While Netflix has increasingly cancelled its original shows early in their run — of the streamer’s more than 30 scripted live-action shows, only three have seen a fourth season, according to THR research — Feldman hopes Dead to Me has a long tenure. 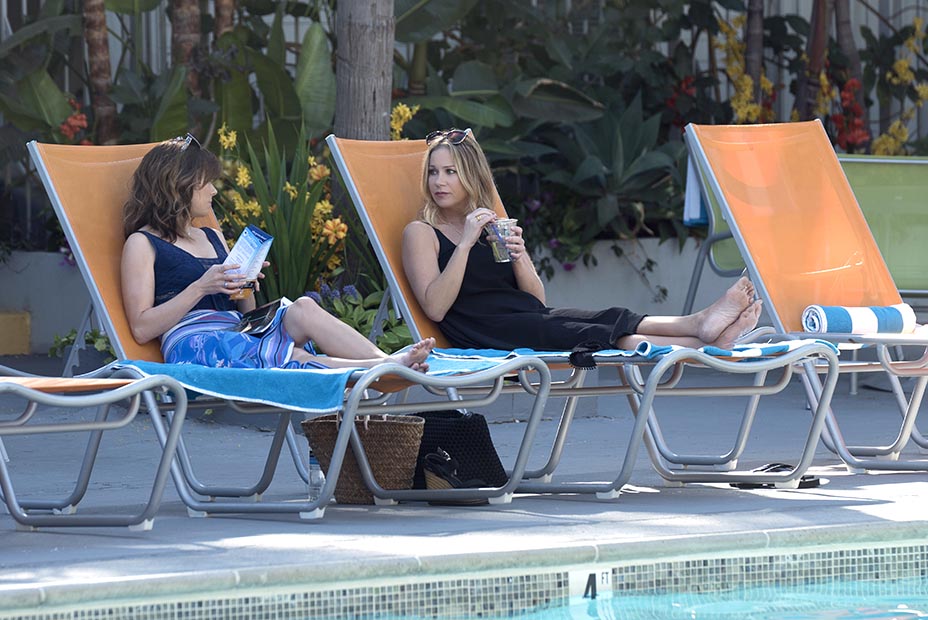 Aside from its focus on death and grief, Dead to Me also deals heavily with women’s issues, covering sexual harassment, breast cancer, infertility and the struggles of motherhood. Feldman says many of those storylines came from her own personal experiences and a sense of responsibility to represent other women who have experienced the same. That goal to accurately portray the feminine perspective was helped by the fact that 80 percent of the writers on Dead to Me are women, eight of the 10 episodes were directed by women and several women, including Feldman and Applegate, served as executive producers.

The series “feels like you’re watching something that authentically came from a group of women. Hopefully that’s what it feels like and that’s what I wanted it to feel like,” the creator says. “I feel like who could tell our stories better than us?”

Dead to Me marked Applegate’s return to TV after seven years, and despite loving and connecting to the script, Feldman says that the star originally thought she was asking her to play the more light-hearted, free-spirited Judy.

“I was pretty adamant about her playing Jen, and I said, ‘I just think this person is in you and I think it would be so incredibly refreshing to watch you play somebody that has this sort of darkness inside of them,’” she says, eventually convincing her.

In casting Cardellini, Feldman says Netflix recommended the star for the show after her work on its short-lived Sony TV-produced family drama Bloodline, and when she heard it she immediately got chills and knew the Freaks and Geeks grad would be the right choice.

“I had never met her before, and when we did sit down, immediately she’s such a warm, loving, hilarious, lovable person that she immediately embodied the characteristics I know I needed for Judy,” Feldman remembers. “I knew I needed Judy to be someone that you just loved despite everything that tells you you shouldn’t.”

Dead to Me is streaming on Netflix now.