[Warning: this story contains full spoilers for Marvel’s The Defenders.]

The Devil of Hell’s Kitchen is dead — or so the world thinks.

But Daredevil will only be absent for so long. In the final scene of The Defenders, we see that Matt is very much still alive, albeit in rough physical condition, recovering in an unknown location where he’s being tended by nuns. It’s an image that’s familiar to fans of the Daredevil comics (as pointed out by Decider), and one that’s sure to fuel the character’s next steps forward in the Marvel-Netflix Universe.

For more on the matter, Charlie Cox spoke with The Hollywood Reporter about Daredevil’s fate, what’s coming next, Matt’s emotional journey via Elektra (Elodie Yung) this season, his view of The Defenders now that it’s out in the wild, and more.

What was your reaction when you learned that this series would end with Matt presumed dead, but secretly alive somewhere?

I was relieved! It was made easier to read that, knowing we have a season three of Daredevil to shoot. (Laughs.) If that hadn’t been the case, I would have been worried that it was all over for Matt Murdock. Being as it was, I thought it was very fun. It was a very interesting way to end it. It’s kind of a cliffhanger, and kind of not. I don’t know what it means for season three, going forward for Matt. It obviously presents him with some pretty interesting options when he reengages with life. Will he reconnect with people? Will he find Foggy and let him know he’s okay? Will he not? I’m very excited to find out what his game plan is going to be, once he gets his shit together.

What’s your feeling on how that will play out? Matt has been craving a fresh start for a while, and even begins The Defenders away from the role of Daredevil. What does a clean slate like this mean for a man like Matt Murdock?

I honestly have no idea. Whenever I think I know where something’s going or what something’s going to mean, I’m often completely wrong and surprised by the scripts when I read them. I almost prefer not to speculate. God knows. I could see it going many different ways for him. As you mentioned, he’s been struggling with who he is, or at least this aspect of himself, being Daredevil and engaging in vigilante justice on a regular basis. I can’t personally see a world where he’ll ever rid himself of that, despite the attempts to hang up the horns, as it were. At some point, one of two things is going to happen: either he’s going to embrace it in a way he never has before, or he’s going to continue to fight it. But at some point, “it” will probably win over.

The ending mirrors a scene from Daredevil: Born Again, a popular arc from the comics. Would you be excited for Born Again to provide the story blueprints for season three of Daredevil?

For sure. That’s such an amazing story. Everyone who loves Daredevil loves Born Again. You can’t not. And if that’s the case, then the implications of that would be very exciting to me. That would be great. Having said that, I know we don’t tend to follow any story blueprints too closely, because if you do, then you become a foregone conclusion. There may be elements from Born Again, but I’m sure there will be elements that are unfamiliar and surprising and different in order for the show to be compelling to fans who know the comics very well. If we start making Born Again page-for-page, then the people who have read it and loved it — the hardcore fans — they won’t have too much drama.

The last time he sees the Defenders, Matt pulls a Lost in Translation and whispers a secret in Danny Rand’s ear. We later learn he was asking Danny to protect the city. In the comics, Danny takes on the Daredevil mantle for a little while. Are you comfortable with Finn Jones running around as the Devil of Hell’s Kitchen if Matt needs some time on the mend?

Yeah, I love that man. I loved that moment. We had a lot of fun on the day, trying to make up all sorts of stupid stuff. (Laughs.) I remember trying to say things [that would break him], because obviously he has to keep a very straight face. I tell him something and the audience at that point doesn’t know what it is. He takes it very seriously. I’m of course saying these very stupid, mundane and silly things in his ear and trying to make him crack a smile.

Exactly. (Laughs.) “Is it raining? I hadn’t noticed!” Yeah, man. I love that stuff. And there are a few characters who dress up as DD at certain points in the comics. Peter Parker is another one. I think one of the nice relationships in The Defenders is the Matt and Danny relationship. Danny looks up to Matt a little bit, as a sensible older brother who has been doing this for a lot longer. At the same time, there’s a mutual respect. Matt is very impressed with Danny’s fighting techniques, and his skills, and his style. That friendship, there’s definitely a lot of room for it to grow. I loved working with Finn. We had a great time. He’s a true professional. If he’s involved somehow further on, wearing the Daredevil suit? Yeah, for sure. 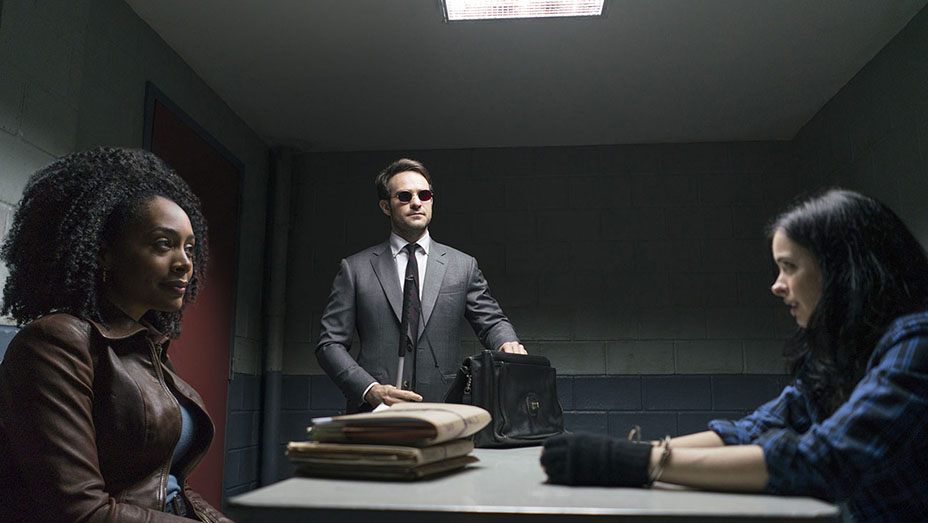 So much of Matt’s story this season involves Elektra, and fighting to bring her back from the darkness. In the end, they seemingly die together — at the least, Matt’s willing to go that far for Elektra. Do you think he was successful in his attempt to redeem her?

I don’t know. My feeling is that he was deluded in that area. It was clear to everyone else — even Stick (Scott Glenn) — that whoever she may have been in the past, and whatever kind of person she may have been, she’s not just had a change of character, she’s been brought back from the dead and turned into something different. She’s almost no longer human. The first time she walks into the room, Matt can’t even identify her heartbeat as a human’s heartbeat. He refers to her as “something else.”

When Matt figures out that whoever this was is in the vessel of Elektra, he’s so drawn to the prospect of it being her, not just because he loved her, but also because it would have relieved a tremendous amount of guilt and shame over what happened to her. He allows himself to believe. He deludes himself into believing she can somehow be refound, or he can get through to her, and the Elektra he knew and loved would be there again. For me, that becomes more and more ridiculous as the episodes carry on, but it’s insight into the head space he’s in. It’s weird, because she does begin to remember things. She does begin to remember him. That, of course, adds to the confusion.

The way I like to think about the Matt and Elektra relationship is it’s the superhero version of the very toxic love relationship you have in your 20s, where you’re on-again off-again for two years, and you never quite get over that person. Part of you is always with that one great true love you had, even though it was always doomed and it was never going to work. This is the superhero version of that.

How will losing Stick impact Matt? He doesn’t have a lot of time to process that death on the show.

Yeah, it all happens quite quickly. I’m imagining it’s something that when the dust settles, he’ll have to revisit that grief. At the same time, the relationship with Stick was a difficult one for Matt. They were always at odds. Maybe it will be paradoxically quite freeing to him, to not be constantly wondering if Stick is going to show up again at the most inopportune moment. One thing that will happen is he’ll have to realize how much he loved that man, and how grateful he is for everything he did. That will be quite a painful moment, I imagine.

What are your final takeaways on The Defenders? This was an event you knew was in your future from the moment you signed on for Daredevil. Did it meet your expectations?

I just had no idea what it was going to be. I had no concept of how these four shows would come together and what it would feel like, and what the tone would feel like. I was very impressed with how they constructed it. It’s a very tough job. I thought [showrunner] Marco Ramirez and Douglas Petrie, it was very tricky for them. They’re obviously familiar with Daredevil, but then they had to become very comfortable writing these other three characters, who they hadn’t been writing yet. Plus, there’s talk about making a show that’s enjoyable for not just the fans of the other shows, but also for people who haven’t seen any of the shows. Early on in particular, there were some reintroductions that people who watched the show, if it was done poorly, could have found boring. I think they handled that really well.

The other thing as well, and this is all technical stuff, but my feeling is that since they have all of these other shows — Daredevil having a season three, and Jessica Jones and Luke Cage having a season two — all of these stories have to time out, if that makes sense. What happens in the lives of these characters in The Defenders has to be consistent with the shows that they’re on in that world. I’m guessing, but presumably, everything happening for Jessica Jones season two, Luke Cage season two, Iron Fist season two and Daredevil season three will be post-The Defenders. It has to be. So in order to write The Defenders itself, you have to make sure you’re in the same timeframe for all of those characters. That just sounds to me like such a mind-fuck. (Laughs.) I don’t know how you do that. And one of the things that happened with this show is that we made it take place over the course of about a week, and a lot of it is very plot-heavy. You get to brush over a few things that if it was an individual show, you probably would have to deal with a bit more.

Do you know when you’re getting back in costume as Daredevil? When can we expect to start hearing about season three?

My understanding is we hope to start shooting by the end of this year at some point. Hopefully that means it’s out in 2018, but it’s not confirmed yet.

Follow THR’s coverage of The Defenders for more interviews, news and deep dives.